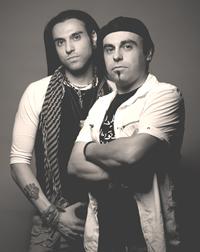 Vision provided the ideal alternative for Toronto International Film Festival crowds who were looking to shake things up outside the regular film fare.  The second day of the festival here was also Quds Day in Persian culture - a time to show support for the oppressed and an ideal time for gathering as the sun dimmed over the glistening parabola of the amphitheatre at Mel Lastman Square in Toronto, Ontario.

This concert was aligned with other events occurring in the free world meant to draw attention to the impending arrival of Iran's dictator for a meeting at the United Nations in New York on September 24. The same United Nations that published the first charter on human rights which was drafted by the Persian king Cyrus the Great in 539 B.C. The same building where the entrance to the Hall of Nations is graced by a poem on human rights penned by the Persian Sufi and poet, Sa'adi. Who better to throw a highbeam into the shadows than Blurred Vision?