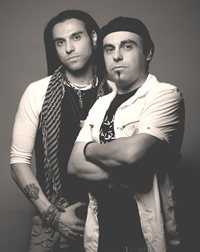 Vision provided the ideal alternative for Toronto International Film Festival crowds who were looking to shake things up outside the regular film fare.  The second day of the festival here was also Quds Day in Persian culture - a time to show support for the oppressed and an ideal time for gathering as the sun dimmed over the glistening parabola of the amphitheatre at Mel Lastman Square in Toronto, Ontario.

This concert was aligned with other events occurring in the free world meant to draw attention to the impending arrival of Iran's dictator for a meeting at the United Nations in New York on September 24. The same United Nations that published the first charter on human rights which was drafted by the Persian king Cyrus the Great in 539 B.C. The same building where the entrance to the Hall of Nations is graced by a poem on human rights penned by the Persian Sufi and poet, Sa'adi. Who better to throw a highbeam into the shadows than Blurred Vision?

Band founders and Iranian-born brothers Sepp and Soheil have experienced these truths and lies firsthand. They create the sort of raging, fiery socially-conscious awareness naturally betrothed to this gathering - in true Persian-style,  an outpouring of soul flowing into quatrains, poetry, melody and rhythms to inspire the gathered. Lead vocalist and guitarist Sepehr and bassist Soheil front a formidable, cohesive four-piece unit featuring Joel Lightman (UK) on backup vocals and keyboards and Giampaolo (Jippy) Scatozza (Italy) on drums.  Their music points to unity as a means to peace - actualized through a unique and truly ground breaking musical style fusing progressive rock with  Persian / Middle Eastern influences and remarkable lyrical expression.

The music of this outspoken group has become a soundtrack for the current uprising in Iran, and for all nations whose people still suffer under oppressive and corrupt regimes. The audience came in droves to protest, mourn and celebrate: To protest the fraud, tyranny and duplicity they see in their homeland; to mourn those who lost their lives in the battle against this wave of oppression; to celebrate the continuation of the indomitable spirit that has kept Persian culture, beliefs and tradition alive far longer than any regime has ever held sway.

From the opener "We Are One", the message rang loud and clear. Though Iran may be a country divided by the worst excesses of tyrannical power, on Quds Day they stood as a single entity with a unified heart. This strength of spirit and purpose echoes across the streets of Iran. Oceans away, the audience  is spellbound, as the band honours and regales them with stories of faith, love and devotion - wound taut around the political spindle shaping the band's beliefs. If their songs are for the strong-hearted, their presentation only lends them more power. From the first notes of Hafiz ... Rise (a song invoking the spirit of the great Persian poet and mystic Hafiz) the audience was on their feet.

Consummate performers, they commanded the stage through a wall of sound that hugged the audience and sustained the pitch until the final, dying strains of "Silent Rain" echoed across the night. For everyone on the square, a rare moment was experienced. A momentous break in a rhythmic ostinato of life through a time capsule of events in their homeland half a world away. Perhaps - just perhaps, all were witness to the beginning of a new era and a new humanity unfolding. Just perhaps.