Skip to main content
Herbie Hancock: 'I felt like I stood on the shoulders of giants and now it's my turn'
Clarissa Sebag-Montefiore Courtesy of The Guardian 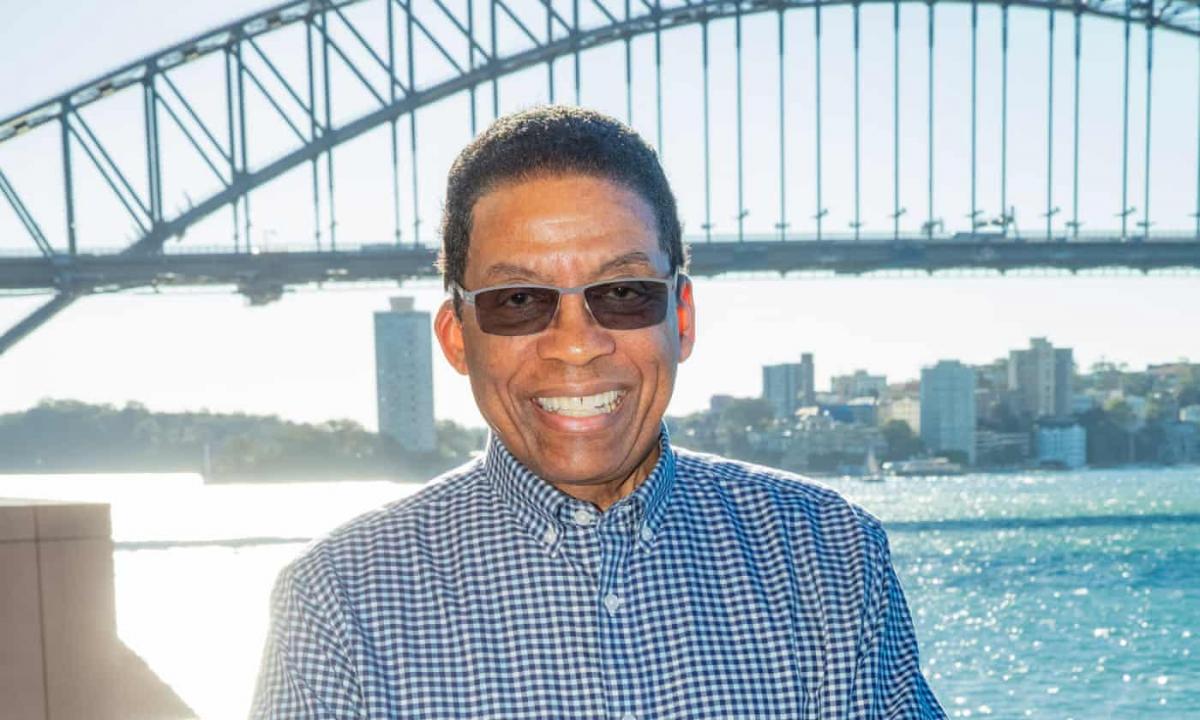 Herbie Hancock poses for a photo in front of the Sydney Harbour Bridge.
Photograph Steve Mundinger

On International Jazz Day, the music legend opened up about his struggles with addiction, the importance of striving and why the secret to jazz is generosity.

It’s 6pm on a Saturday night and Herbie Hancock is chanting down the phone to me.

He pauses, a little breathlessly, to instruct me: “You don’t have to chant that fast.” I’m tempted to jump in – it all seems very soothing – but I don’t know the words.

We have been given – strictly – 15 minutes to talk by the jazz legend’s American press team. But as we get deeper into Hancock’s Buddhist faith, 15 minutes turns into 30 and then into an hour. It is only when I admit, with regret, that I have to go to put up my new IKEA bed, that we both realise the time.

Hancock is in town to lead a masterclass at the Sydney Opera House for International Jazz Day – a precursor, of sorts, to his appearance at Vivid LIVE in the city this June.

In the intimate Friday class (really more of a concert) Hancock, along with the Australian musician James Morrison and Hancock Institute Fellows, plays everything from ragtime to his own most famous compositions, including 1962’s Watermelon Man. Watching him is an attentive, adoring audience of mostly teenage music students. As he leaves, he stops to fist-bomb a geeky 19-year-old, who audibly gasps. Afterwards the novice confides to me: “What a man! I wish someone had filmed it. It was the best moment of my life.”

Hancock has that effect. Dressed when we first meet in a suit and blue checked shirt, he is unfalteringly polite, with the gracious, gentlemanly air of your favourite grandpa. When a woman gives him a hug, he pauses to check it’s OK (“Hashtag MeToo. You have to ask”) and when children are wheeled in for a photo op, he makes sure there is time to ask them questions and show them his callused piano hands.

This is a man who has won an Oscar (in 1987, for the film score of Round Midnight), 14 Grammys (too many albums to list), and in 1994 received a star on the Hollywood Walk of Fame. “Herbie was the step after Bud Powell and Thelonious Monk,” Miles Davis wrote in his autobiography. “And I haven’t heard anybody yet who has come after him.” But as Hancock puts it, with quintessential humility and a warm laugh, “It’s jazz. It’s not like I’m a Hollywood movie star.”

A child prodigy, Hancock, 79, grew up in Chicago where his mother worked as a secretary and his father a government meat inspector. Aged 14, following a diet of classical, rhythm and blues, and doo-wop groups, he discovered the joys of jazz at a school concert. “And I said: I want to learn how to improvise,” he remembers.

In his early 20s, he joined the Miles Davis Quintet, and later worked with the likes of Joni Mitchell and Paul Simon. As his career progressed, he helped to redefine jazz, taking it electric in the 1970s and mixing in different genres, including funk and pop.

Performing events such as the Opera House masterclass is critical, he says. “That’s how I learned: from people who are older than me. I felt like I stood on the shoulders of giants and now it’s my turn.”

“Can you give me a good definition of jazz?” an audience member asks the ensemble on Friday.

With Hancock sitting down, out of the way, the Institute Fellows look panicked, then mortified, sheepishly shifting their legs, willing themselves not to be picked to speak in public. But Hancock, like a genial headmaster, gets up from his chair to probe each of his wards. “What do you think?”

“The first thing that comes to mind is freedom,” says someone. “Freedom to express,” another band member adds.

Hancock then offers his take. “For me the most important thing is that it is about sharing … Jazz is famous for being the kind of music that really supports the people that are performing. That’s a good lesson that we as humans need to learn … what other purpose can explain our existence?”

Helping him along has been his 50-plus-year marriage to his wife, Gigi, with whom he has a daughter. I press him for the secret. “Absolutely, I’ll tell you,” he says in his slow drawl, a drawl made for confessions and confidences. “It’s to let the other person be who they are, let them develop themselves and not make them responsible for your happiness. For the only person that is responsible for your happiness is you.”

Hancock realised that firsthand when he found himself accidentally addicted to crack. Although he had snorted cocaine before (“it mostly just wakes you up like several cups of coffee”) he was curious about smoking it. “So I tried it. Immediately I went oh no, I shouldn’t have done this. You know what it does? It goes right to the pleasure centres of your brain and overloads it.”

Ashamed and terrified of being caught, he hid his habit, only stopping when his wife, daughter and two close friends held an intervention in 1999.

“I just broke down and cried. One thing I was glad about, I was glad that it was going to be over,” he recalls. Today, Hancock, who lives in West Hollywood, no longer drinks or smokes (he gave up both two decades ago). He also recently became a vegan on orders from his doctor (“I got to cut out chicken? I love chicken!”).

The encounter, too, taught him something else: that life is about constant improvement. It is something he takes into his music. “I hope I’m always striving. Why would I play anymore? What would be the joy? The joy is in the striving.”

Throughout our conversation, however, it is Buddhism, not jazz, that gets Hancock going. He has practised Nichiren Buddhism at Soka Gakkai International (SGI) – he chants for up to an hour each day – for just under half a century. Its core principle, he is at pains to tell me, is to live a causative, rather than reactive, life.

“We have a tendency to be encouraged to be reactive. Something happens and we freak out. Pause before you hit the send button. That means be causative. Think before you just react,” he explains. “Because reacting means that you are a victim of external circumstances. Usually we are our worst enemy; it’s not external things. And to learn to live a life like that: to look to yourself.”

Looking to himself in Australia means bearing witness to First Nation peoples. In Sydney, Hancock recorded a reading of the Aboriginal author Karen Manbulloo’s children’s book Moli det Bigibigi, or Molly the Pig. While he read in English, Manbulloo read it in Kriol, with the final audio due to be released in May.

Later on, as the sun goes down on a Saturday night and I’m sitting on the floor holding the phone on speaker amid dozens of pieces of bed board and nails and screws, thinking how the hell will I ever put them together, he assures me that challenge is part of the human condition.

I’m not quite sure he’s talking about IKEA furniture per se. But it’s a comfort nonetheless.

“The real joy in life is to be able to continue to advance forward and to become a better person today more than you were yesterday. Sometimes you may take a step forward, sometimes a step back. But as long as you never give up.” Hancock sighs. “Then that really is the sign of a good life.”