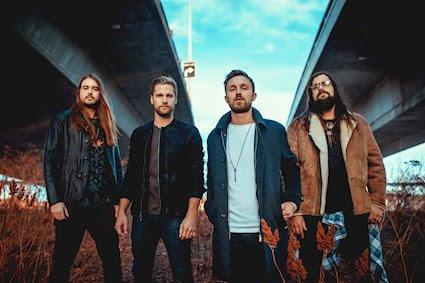 This is music with meaning, sometimes even a message, that’s always built around a powerful vibe and uncompromising passion. Royal Tusk is a deeply soulful celebration, brimming with working-class optimism and tempered by renegade realism. On their sophomore-slump-smashing TUSK II, the group summons the effortless energy of an era of rock music when bands weren’t content to merely reverse-engineer hit-making formulas to move units. RT debuted with the Mountain EP in 2014; their debut full-length, DealBreaker, arriving two years later. Now, two years after that, we find Tusk II

There’s also a healthy dose of observational commentary about the massively screwed up state of the world. “Our earlier stuff was a bit more gentle,” Carriere explains. “It was about love. This record is angry, fed up, perplexed.” I want people to think of us the way we think about our favorite bands,” adds MacKinnon. “When people listen to Royal Tusk, I hope it connects to experiences that matter in people’s lives. That’s the reason why we do this.”

“Forty Light Years” is a “cannonball prayer straight to my mother’s longing heart,” says Tom Wilson. The new single from his upcoming Lee Harvey Osmond LP, Mohawk, is “a timeless quest for bonding and the nagging desire for freedom all disguised in a groovy 3:24 burning saunter,” he says. “I write these songs because I have to. I’ve finally earned that right. They often get dismissed as an offering from some ‘veteran rocker’. Allow me to fuck that shit for you right now…”

Due January 25 via Latent Recordings, Mohawk, the fourth Lee Harvey Osmond album, centers around the discovery of Wilson’s true heritage and the culture that it carries which now informs all of his art.

When Wilson created the moniker Lee Harvey Osmond he wasn’t entirely certain if this was a new stage name or merely a provocative handle for the musician/artist collective assembled by producer Michael Timmins to record a collection of Tom Wilson songs that would become A Quiet Evil. This was the first of four albums bearing the featured artist Lee Harvey Osmond. The Folk Sinner was next, followed by the breakthrough Beautiful Scars. It was during this time between releasing Beautiful Scars and recording Kings and Kings with Blackie and The Rodeo Kings that Wilson went public with his recent discovery. He was not exactly the person he thought he was.

In his 50s, Wilson learned that the parents who raised him were not his birth parents; that, in fact, he was adopted and that his biological mother and father were Mohawk from the Kahnawake reserve, just outside of Montreal. Grappling with this newfound sense of himself plunged Wilson into a quest for his heritage and his truth, and led to the writing of his bestselling autobiography, Beautiful Scars (Doubleday Canada). The book is a colourful and truthful tale of this quest, and his life’s tribulations and successes along the path.

“It is a story of finding your way home,” he says. “It’s a story of adoption, of growing up thinking you’re a big, sweaty, Irish guy, and finding out at the age of 53 that you’re a Mohawk.”

Wilson’s life has been an ongoing quest so it is perhaps inevitable that after decades immersed in poetry, literature and music he would turn attention to visual art, a language that transcends the verbal and the written. The packaging and visual elements of Mohawk incorporate Tom Wilson creations. In particular a painting of the same name from his collection Beautiful Scars: Mohawk Warriors, Hunter and Chiefs. He is still driven to ask questions, to seek meaning from the elusive mysteries hidden beneath the surface of everyday existence, to come to terms with his history, his identity; to aspire to higher truths and to understand his place in the world. “If I have 20 more years on this planet, I hope to keep becoming a Mohawk, because I can’t become a Mohawk the way my brothers and sisters and ancestors did.”

‘Say It’ (released May 18, 2018), produced by Maple Blues and JUNO award-winners Kendall (Downchild Blues Band) and Leonard (Fathead), represents Brown’s journey in roots and blues; it highlights her formidable voice and delivers authentic and witty self-penned songs. With origins in Alberta’s oil patch, followed by 30 years in the Toronto music scene and then making a move to Nelson, B.C. in 2017, this album marks an exciting next chapter.

Brown, recently featured on Brent Morrison’s The Rockin’ Blues Show Top 29 Canadian Rockin' Blues Albums Of The Year 2018, states, “It’s a great honour to be selected to showcase my music at the 2019 Blues Summit, especially since I’ll be appearing with my all-star supergroup, who were so instrumental in the making of my album. I can’t wait to reconnect with some blues music friends who I haven’t seen in a while, meet some new folks and am interested in booking some festivals and shows. It’s a wonderful opportunity and I’m super excited.”

Taken from her highly anticipated new album, Scenery (Feb 1, ATO Records), Emily says of the track, "I got tired of waiting around for someone else to please me. It became a song about self-reliance. Realizing I didn't need anyone else to make me feel good in any way, I only needed to trust myself."

Scenery, produced by longtime musical cohort Jeremy Most and mixed by Tom Elmhirst (Adele, Amy Winehouse, David Bowie) was recorded in upstate New York, nestled in the Catskill Mountains, where Emily now makes her home after a lifetime of Lower East Side living.

Scenery follows the critically acclaimed album The Switch (2015) which included the hit "Distance" (more than 13 million streams). Following the album's release, King performed on The Daily Show with Trevor Noah, Conan, Prairie Home Companion, and toured with Alabama Shakes. This is her first release with ATO Records.

A proud New Yorker, Emily spent her first three decades living on the same Midtown block. She loved her home, her family, her friends, and her life there. But last year, when she finally resolved to challenge herself by moving out of her comfort zone, positive changes started taking shape immediately. In Upstate New York, the fresh air and fresh mentality gave her the proper space and perspective to create what could become the album of her career.

King is currently on the road, taking Scenery to the people.

BITS’N’PIECES……This will shake that slush right off your shoes and rattle the cold right out your bones. Toronto's irrepressible blues artist and singer, Sugar Brown, takes to the stage at the Dakota Tavern, Friday, Jan. 25, 10:30pm, transforming it into a late-night juke joint as he sings, blows a harmonica, and screams through his Six-Stringer. He will be accompanied by the People's Blues Liberation Army Band, featuring Jordie Edmonds on guitar, Michelle Josef on drums, and Russ Boswell on bass. It promises to be an evening of raucous and raw blues with dancing all night long and featuring songs from Sugar Brown's most recent album, "It's a Blues World," which has been nominated for a Maple Blues Award for Best Recording of the Year…....Last Spring, as Hugh’s Room Live celebrated its first anniversary, one of the terrific surprises in an evening filled with great artists and their music was the duo, French Squeeze. Now, due to popular request, they’re back! Classical singers, Jacques Arsenault from Charlottetown, Prince Edward Island and Marjorie Maltais from Charlevoix, Quebec join their beautiful voices together as French Squeeze, presenting original arrangements by Jacques on accordion.

Join this delightful duo as they share their favourite French songs from the Champs-Élysées to the shores of St. Laurent, including hits by Edith Piaf, Charles Trenet, Jacques Brel, Alys Robi et al. Mes Amis, it’s all happening at Hugh’s Room Live Sat. Feb.2 Doors at 6pm, music 8:30pm……..so hearing all this chatter about Gothabilly duo HOTCHA! breaking up/ bulking up so we thought we’d go to the source for the Word. Here’s Bev Kreller, the vocalist/percussionist/accordionist half of HOTCHA1: “LOL, no HOTCHA! is still going strong. Thanks for asking! We have some new music to record and are at the Winterfolk festival in February, plus a date with Dave McEathron (of Warped 45s) at Burdock on March 9.

“We began SHAKE The Bellows with me, Howard Druckman and Kevin Gould as a completely separate thing, last year for Howard’s birthday and we had so much fun, we decided to continue. It’s 2 accordions, 1 guitar, 3 voices, playing everything from French café music to Tex-Mex, Gaelic to Cajun!”

So HOTCHA! spawned an offshoot band and I for one can’t wait to hear it.

Support live music all year round.