Skip to main content
Glen Campbell Sings for the King 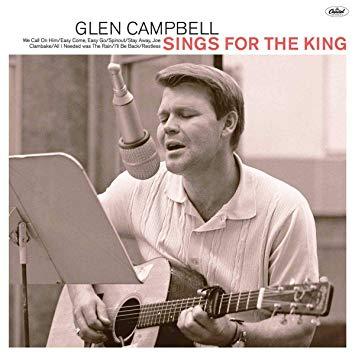 Before he became the Rhinestone Cowboy, Glen Campbell secretly recorded demos for several years for The King of Rock and Roll, Elvis Presley. A new album released today on Capitol/UMe aptly named Sings For The King collects together some of these rare songs that Glen sang for Elvis. Originally intended for The King’s ears only, fans of both legendary artists can now enjoy this discovered piece of history that has gone completely unknown about for more than a half a century. Many of the songs were made famous by Elvis in his movies with on-screen performances of tracks such as“Spinout,” “Easy Come, Easy Go,” “Clambake” and “Stay Away Joe.” The album, available on CD, vinyl and digitally, opens with a newly constructed Glen-Elvis duet of the poignant gospel song “We Call on Him,” which fuses their voices together allowing listeners to hear how Glen set the stage for Elvis and how the two superstars would have sounded together.

The collection is also available on limited edition 180-gram clear vinyl exclusively at GlenCampbell.com.Glen recorded the songs featured on Sings For The King between 1964-1968 in between recording hundreds of sessions with the Wrecking Crew, touring with the Beach Boys, and recording his own albums.

Sings For The King includes songs written by the songwriting team of Ben Weisman and Sid Wayne. Weisman is significant for having written the most songs recorded by Elvis than any other songwriter in history at 57. Weisman and Wayne turned to Glen Campbell who had perfect pitch and an uncanny ability to match Elvis’s key and even mimic his delivery, to record fully fleshed out studio versions that they could present to Elvis for his recording consideration. The songs were discovered by Executive Producer Stephen Auerbach who found the fifty-year-old recordings on long-forgotten reel-to-reel tapes in a storage space belonging to his wife’s uncle, Ben Weisman. Of the 29 recordings that have been rescued, there are twelve of Glen’s recordings that went on to be recorded and released by Elvis including “Stay Away Joe,” “Clambake,” “Spinout” and “Easy Come, Easy Go,” which were all made famous with iconic singing performances of the title tracks in his movies.

The variety of the material is striking and ranges from the country-flavored “Any Old Time” to the more rocked-up “I’ll Be Back” to meaty ballads like “I’ll Never Know.” On “I Got Love” Glen begins the song sounding like himself but then subtly shifts into Elvis’s trademark tone. The album opens with the gospel song “We Call on Him,” which features the two legendary voices fused into a duet, giving a real sense of how Glen’s performances teed up these songs for Elvis, and then where The King took them and made them his own. All eighteen songs highlight Glen’s incredible vocal range and guitar skills and draw focus to Weisman and Wayne’s understanding of all the styles of music Elvis could perform.

As noted, music journalist and author Alan Light wrote in the illuminating liner notes, “With their genre-bending musical exploration and rural Southern roots, it’s no surprise that Glen Campbell and Elvis Presley formed something of a mutual admiration society.” ‘Elvis and I were brought up the same humble way,’ Campbell once said, “picking cotton and looking at the north end of a south-bound mule." The friendship between the Rhinestone Cowboy and the King of Rock and Roll spanned three decades, and they often orbited each other professionally.”

Glen and Elvis first met in 1956, when Elvis performed in Albuquerque, where Glen had recently moved to join his uncle’s band, Dick Bills and the Sandia Mountain Boys. “I saw him in the rough,” Glen later said. “He was so electrifying.” In 1960, Glen headed to Los Angeles to find work as a session musician and took a regular gig at a club called the Crossbow, where Elvis and his friends would sometimes come watch from a small private room upstairs. As a member of the incomparable group of LA studio musicians known as the Wrecking Crew, Glen appeared on dozens of immortal hits, from “You’ve Lost that Lovin’ Feelin’ ” to “Strangers in the Night.” In 1963 alone, he added his guitar to almost 600 sessions, including his one and only recording with Elvis, for the “Viva Las Vegas” soundtrack.

By 1967, Glen’s own career was exploding with the release of his breakthrough albums Gentle on My Mind and By the Time I Get to Phoenix, which both reached Number One on the charts, and made Grammy history by sweeping the Song and Performance awards in both the pop and country & western categories. The following year, By The Time I Get To Phoenix took home the prize for Album of the Year, the first country record to do so. Yet Glen continued to knock out songs for Weisman and Wayne in whatever spare time he had.

The relationship between these two Hall of Famers might have become more extensive: When Elvis was assembling his TCB band in 1969, his two finalists for the lead guitar chair were Glen and James Burton. But while Glen was riding high as a solo artist following the monster hits “Gentle on My Mind,” “By the Time I Get to Phoenix,” and “Wichita Lineman,” Burton was available since his previous boss, Ricky Nelson, had recently broken up his backing band.

As it turns out, though, there was a deep connection between Elvis and Glen that almost no one was aware of—until now, with the release of Sings for the King. This historic collection casts new light on the quiet influence that one musical giant, and an often-overlooked songwriting team, had on America’s greatest rock and roll star.

SINGS FOR THE KING TRACK LISTING