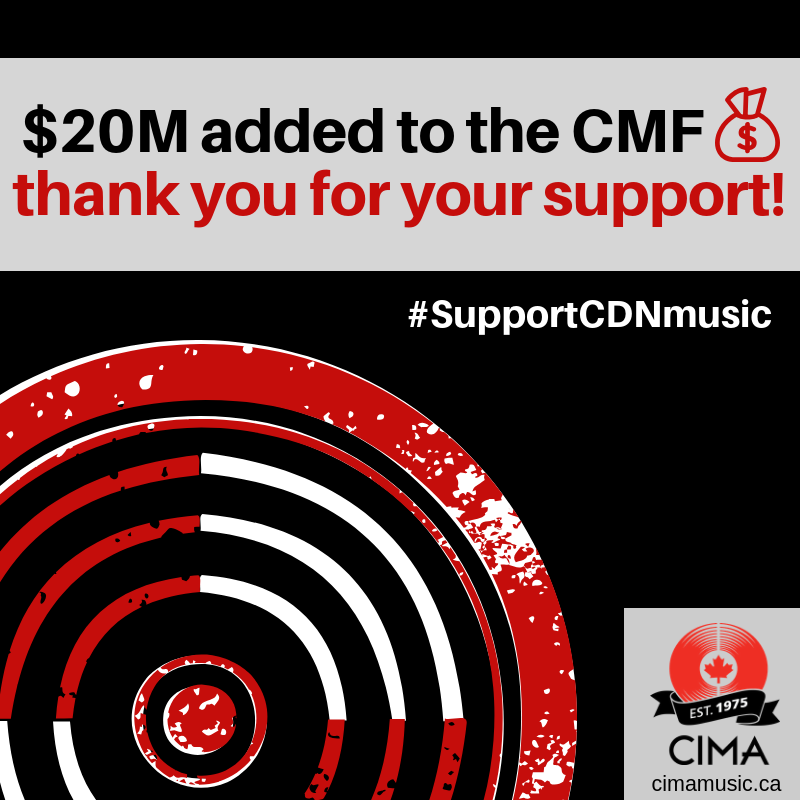 The Canadian Independent Music Association (CIMA) applauds the Federal Government for its bold new investment of $20 million over two years towards the Canada Music Fund (CMF) in this year’s Federal budget.

The Federal government has been a strong partner for the Canadian independent music industry. The CMF has been a critical source of support over the years but had been underfunded and over-subscribed for the past decade. Today’s budget adds to the momentum from the government’s 2016 investment in the music sector of $4.2 million over 2 years. The Government’s additional $20 million from Budget 2019 into the CMF is a testament to their commitment and support to Canadian music and its creators.

“This funding increase is fantastic news for Canada’s commercial music industry. We are incredibly grateful to the Federal government and specifically our dedicated advocate, Heritage Minister Pablo Rodriguez, for showing their support of our industry. We are keen to continue to work closely with government to ensure that these dollars are invested in the most impactful way, such as providing additional support for sound recording, international export opportunities, promotion, marketing, touring and showcasing, and the domestic development of our great artists,” says Stuart Johnston, President of CIMA, the not-for-profit trade association representing the interests of Canadian owned music companies from coast to coast to coast.

Johnston says that he is heartened to see that many aspects of the government’s plans are a reflection of CIMA’s years of advocacy efforts. With the help of their members, CIMA led a strong campaign requesting additional funding for the CMF. CIMA has also been advocating for additional dollars to be dedicated to supporting the industry’s music exporting initiatives. In September 2017, the government announced its commitment to expand market access and export opportunities for all cultural industries through an investment of $125 million in Canada’s first Creative Export Strategy, including the creation of the Creative Export Canada Fund. CIMA continues to advocate for export dollars dedicated to the music industry.

Earlier this year, as a direct result of CIMA and l’ADISQ’s advocacy efforts, the CRTC announced that major broadcasters in both language markets will be required to allocate an average of $5.5 million per year for three years to support the production of musical programs through FACTOR and MUSICACTION, resulting is an additional $16.5 million for the industry.

With today’s $20 million announcement, the Canadian independent music industry will now benefit from a total of $40.7 million of new investments from the federal government over 5 years.

“We’re grateful to the Federal government for its deep commitment to Canada’s music industry, “says CIMA’s Board Chair Lisa Logutenkow, Vice-President Dine Alone Records/Bedlam Music Management. “Canada has always been known for its music, but it takes support and investment from entrepreneurs in all corners of the industry as well as programs like the Canada Music Fund, to make Canadian music internationally competitive. For my company, this investment could mean access to more resources to help our artists and company grow domestically and internationally. It helps us compete more aggressively in the digital world as borders become less relevant and every artist has a global plan.”

If you're interested in reading more about the new investment to the Canada Music Fund, as well as other support for arts and culture, head to 'Part 2: Support for Diversity, Culture and the Arts' here in Budget 2019.