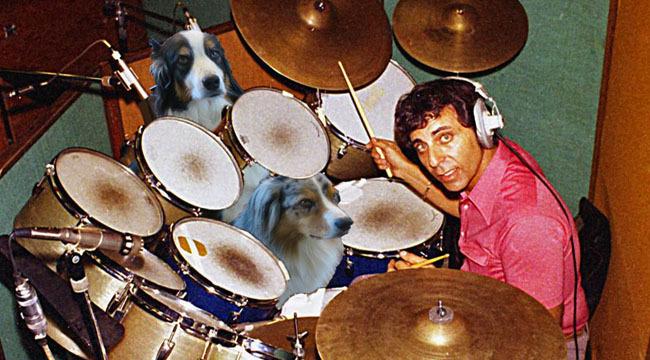 Hal Blaine, the drummer for The Wrecking Crew, has passed away at the age of 90. Blaine was one of the most recorded studio drummers in the history of the music industry, having played on an estimated 35,000 sessions, 6,000 singles and on 40 number 1 hits.

Hal Blaine was actually the driving beat behind the soundtrack of our lives From the early days of Phil Spector and The Ronettes to The Byrds and The Beach Boys Hal Blaine’s creative style shaped the sound of pop music The opening drum hits on The Ronettes ‘Be My Baby’ made the song instantly recognizable. Pop legend Andy Kim said on his Facebook page “Listening to the explosive intro of ‘Be My Baby’ by The Ronettes made my transistor radio shake, and started me dreaming of what my world would be like living inside that radio. Thank you, Hal Blaine.” Blaine even played at his own 90th birthday bash.

Hal was born in Holyoke, Massachusetts and started playing drums at the age of eight and moved to California with his family in 1943. Gene Krupa’s teacher Roy Knapp was Hal’s instructor from ’49 to ’52 and that readied him for the live circuit working the Chicago clubs. He was part of Count Basie’s big band and toured with Patti Paige.

His sessions are too numerous to list as The Wrecking Crew were such a huge part of the music of the day although not everyone knew. Back then musician credits weren’t always listed on album covers. People buying a record by The Association, for example, wanted a mental image of the band playing and singing, not a bunch of session musicians. The Monkees, The Byrds, and countless other groups were backed by the studio band.

This list of credits bears sharing because of the impact these songs and is quite an accomplishment Blaine played on six consecutive Grammy Award Record of the Year winners.

"Hal Blaine Strikes Again" was a rubber stamp used by Blaine to mark music scores and places where he played. Drummer and author Max Weinberg spotted the stamp in Wembley Arena's dressing room while touring with Bruce Springsteen's E Street Band. When asked to explain about the stamp Blaine said, "I always stamp my charts." The stamp was used for any piece of music Blaine played on. A statement from his family read "May he rest forever on the 2 and the 4" referring to the second and fourth beats of a measure in music.