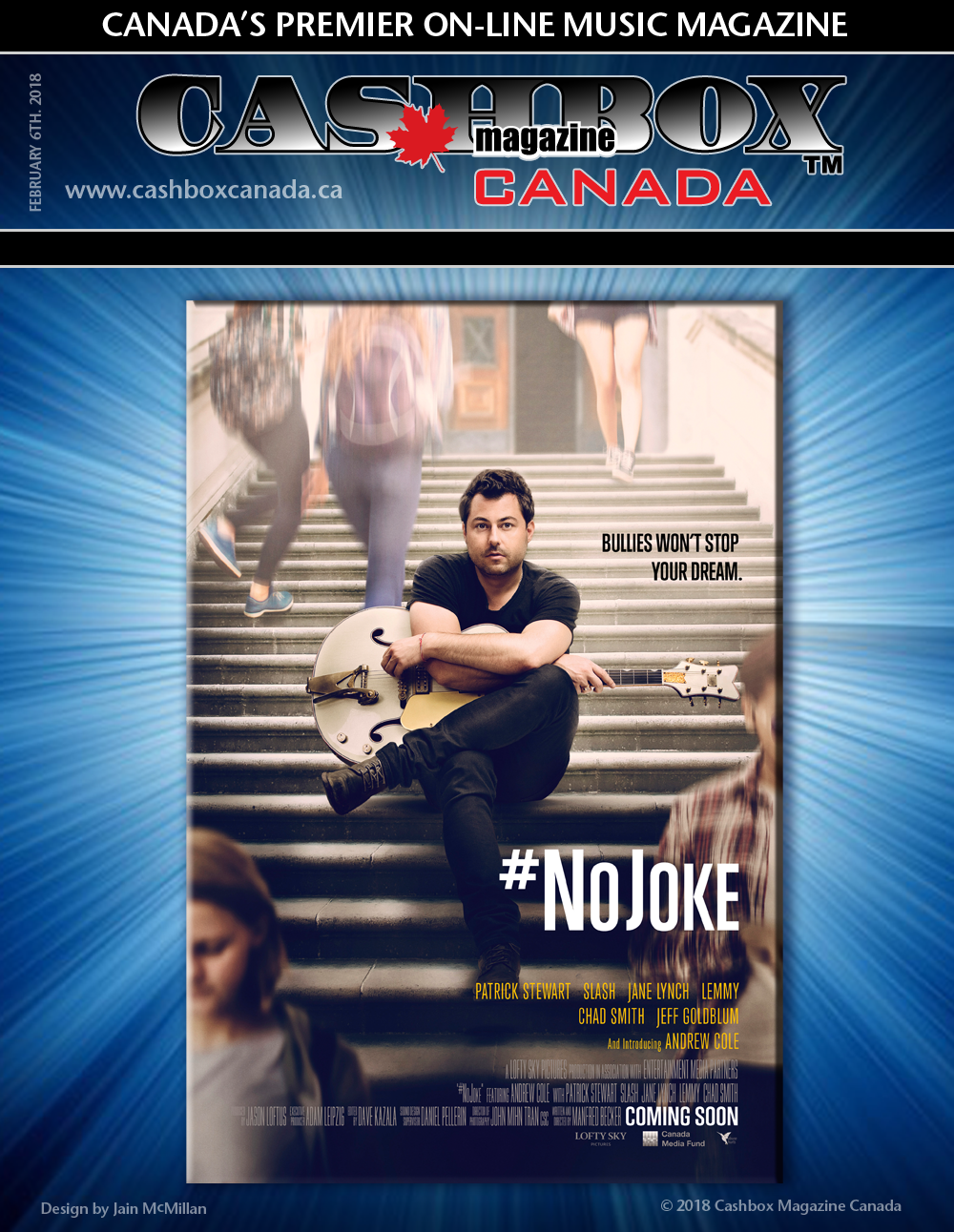 We caught up with Canadian born singer/songwriter at his home in California and he wants you to know he’s no joke, that nobody is a joke and bullying is not a joke. Every living person deserves respect and to be treated with dignity no matter what their station in life. Andrew was born in Toronto, Canada but he and his family left when he was only 6 months old for Liverpool, England. “I went to about 20 different schools and I was always a little different, an outsider. I’m not really sure why my parents moved around so much. Dad was a truck driver and Mum was a nurse so it wasn’t like their occupations required travel and relocating. But I remember always moving, I guess they were looking for the best place to be for me to grow. We had moved back to Canada and Mum decided I needed to get a British education so we moved back to the U.K. And so it went.”

Andrew is now living in sunny California as he pursues his project #No Joke. “As I said I was always moving as a kid so I always felt like an outsider and I was always the newbie. For whatever reason, I became the target of bullies and was constantly being harassed and made to feel like I was a joke. I used to say ‘Do think I’m a joke? Am I a joke to you?’ It triggered something in me and I had to find ways to combat it.”

Andrew had released his first album in June 2010 entitled "Why We Wonder" under his own label Crier Records, which featured Tom Cochrane and Kathleen Edwards. In 2012, he released a two-song EP entitled "Voices" including two singles "Voices at 4am" and "Psycho Cabaret." The EP featured a number of artists including Tom Cochrane of "Life Is A Highway" fame, Kenny Arnott of Smashing Pumpkins and Elton John and Alex Lifeson from Rush. It was at that period of time that he got an idea and set out to get some of his musical idols to help him record a song to bring awareness and give support to victims of bullying. “It started with Jeff Goldblum, when I told him what I was doing and asked him to play piano on the track and he said ‘Sure.'”

The list of talent grew with the addition of Slash, Patrick Stewart and the late Lemmy from Motorhead. “Lemmy said to me at one point ‘Now you done your anti-bullying song you can move on with your regular career. Then he looked at me and said You can’t can you?’ He was right, the passion was there.” The industry heavyweights the project attracted was outstanding as seen in the trailer for the movie #No Joke that was manifested by the jumping on board of Manfred Becker who wrote and directed it and executive producer Adam Leipzig, former president of National Geographic Films and SVP at Walt Disney Studios. And the list of industry luminaries involved continues to grow, besides the aforementioned Sir Patrick Stewart, Slash and Lemmy there is Steve Vai, Meat Loaf, Chad Smith, Julian Lennon, Cedric the Entertainer, Jane Lynch, Lights, and Ozzy Osbourne. "And I’m still trying to get more involved. I remember as a kid, maybe 1989 I was riding my bike and for some reason, I was singing the Batman theme. For that moment I felt like that was my theme and I was a superhero; it gave me strength. Flash forward to the Oscars where I ran into Michael Keaton. I instantly remembered that time on my bike and approached him and said ‘you’re Batman and told my story of the bike and the theme and my #No Joke project. He said cool and introduced to his son saying ‘This is my superhero.’ Maybe he’ll get involved? The connection has been made. And recently I was at an Adele function talking to the likes of Russell Brand, Cameron Diaz and Ashton Kutcher.”

It’s truly inspiring to watch how one man with an idea and a passion can influence a culture and make a difference with sheer determination and belief in a message and a need to heard. Bravo Andrew Cole, keep going.