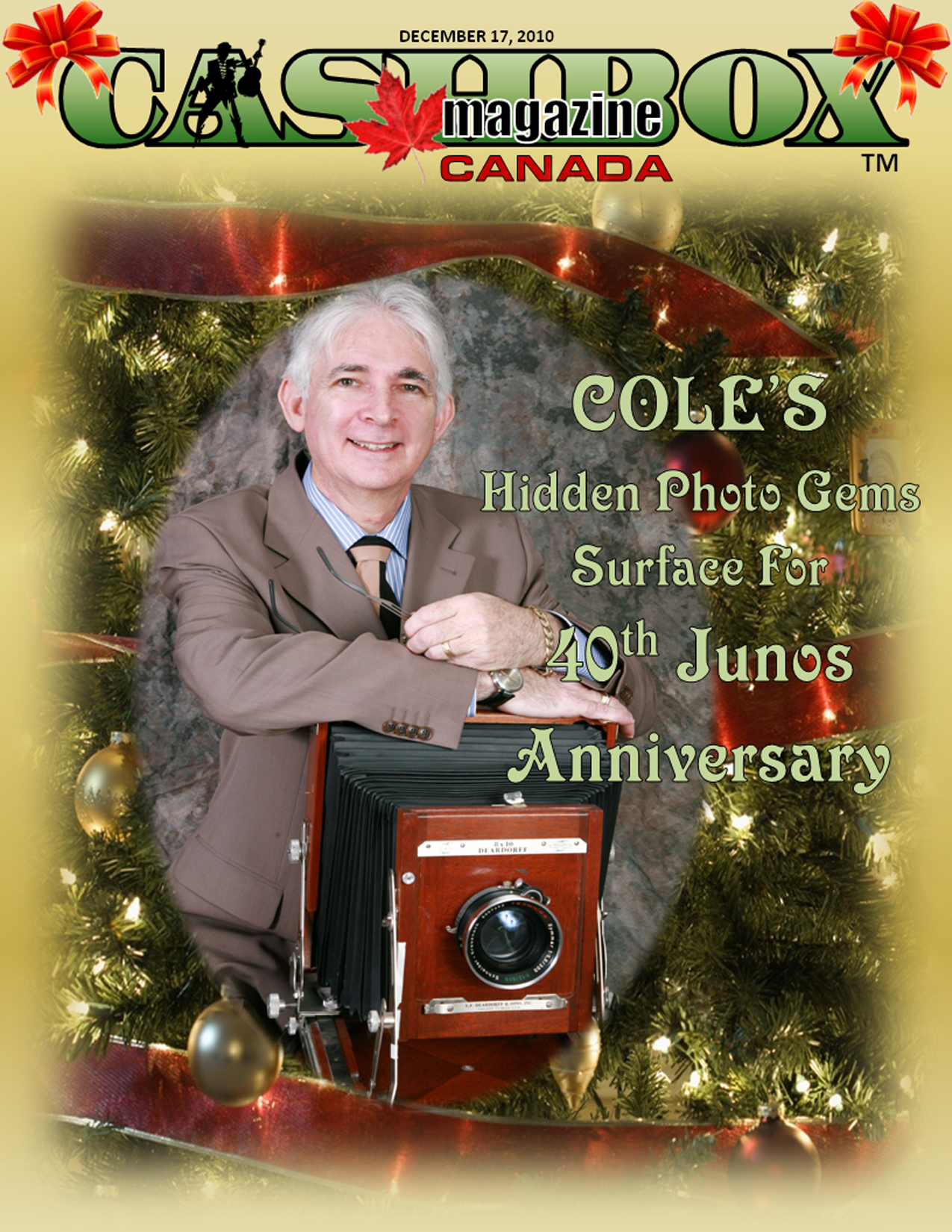 With all the energy building around the upcoming 40th Anniversary of the JUNOS, Cashbox had a chance to ask legendary Rock photographer Bruce Cole a few questions on his experiences as a photographer in the Juno years, his start in the industry and few tips for the fans on their next concert shots.

C.B: You started in photography as a teenager? What drew you to it when your friends were probably into sports and girls, teen stuff etc. and what was your first camera?

Cole: My first camera was my dad’s, it was a rangefinder style model made by Iloca of Germany with a Zeiss Lens. The first time I saw a print develop in a darkroom tray, I saw the magic of how a simple sheet of white paper became an image. I was hooked!

C.B: Once you decided to make a career out of it, how did you branch off into the music scene vs. weddings, portraits and news, which would be a normal route for a young photographer?

Cole: My dream was to be a commercial shooter and start as a news journalist. (At that time the most prestigious photojournalists shot for National Geographic and I once considered moving to Washington, D.C. to pursue that dream.)

To supplement my income in the first few years, I did about 70 weddings (Portrait work was a great learning experience working with non-professional models and under unknown working conditions until I arrived at the scene). Family portraiture was not my passion and I quickly decided that if I was to work for the majority of my life that I had better start doing what I loved.

When I applied for jobs as a news photographer with the local papers (The Toronto Star, Toronto Telegram, and the Globe & Mail) there were no openings for young starting up photographers. So I became a freelance photojournalist. Music was also a passion, so I decided to devote my attention to combining my two passions, photography and music. I was not musically inclined, vis-à-vis, playing an instrument, but understood the creative relationship between the craft of music and imaging.

I was 21 at this point in my career. I graduated from Ryerson Polytechnic with Marketing and Advertising, which gave me the business skills I needed. Photography was a life-long hobby that I wanted to turn into a business. I started covering live musical events to learn and teach myself photography and then visited with the local underground music publications to see if they would be interested in publishing my photos. This did not pay that well, but did get me published and known in the music business.

I then started to do freelance assignments for The Toronto Star and Toronto Telegram, covering concerts and other entertainment events.  I also introduced myself to the local record companies, offering my services to cover their groups while touring radio stations, TV, record store promotions and private receptions.

This raised my profile and then I started doing promo shots for local bands just starting up like RUSH and Downchild Blues Band. Folk music was at its zenith at this time and I worked with artists like Gordon Lightfoot and Dan Hill as their photographers.

C.B: How did you get hooked up with the Junos?

BC: The live award presentations were started by Walt Grealis and Stan Kulin of RPM Magazine as the Gold Leaf Awards in 1970. This was the start of the Canadian Star system to honour Canada’s best musical performers and writers. Walt Grealis’ publication had published many of my photos in the past and I offered my services to cover their awards event in 1971.

It was an opportunity to be working at a music event with many of my clients in attendance. In 1975, CARAS (Canadian Academy of Recording Arts and Sciences) was created and became the organization responsible for conducting the Juno Awards. Since I had been covering the awards since 1971, I was already known as the “guy” that shot the awards. So when I introduced myself to CARAS, they wished to have me continue. I was provided with photo credentials to cover the Junos for CARAS and other media outlets that did not have photographers to cover the event.

C.B: You have some amazing and clear images considering the spontaneity of the event, what was your camera of choice and seeing that this was before the digital age what speed of film did you find worked best?

Cole: Depending on the shooting environment, my two cameras were Nikon and Hasselblad. I preferred to shoot 2 ¼’ ‘blad images as I was able to make huge enlargements without loss of quality. 35mm became my backup format or my primary format, if shooting conditions became ‘hostile’. 2 ¼” x 2 ¼” negatives gave me the opportunity to shoot wide and still give me the opportunity to crop tight without loss of quality. And when I did get the perfect full frame shot in this format, it was awesome!

Shooting live performances required learning the skill of pre-determining the direction of the action and the peak of the action. So that I learned how to follow the performer and have my camera in the right spot to capture those jumps and rapid movements that live performances created.  Depending on the lighting (or lack of it), determined the type of film I would select. Sometimes I had to ‘push’ the processing due to low lighting and too much action, so this also played into the selection.

We did not have computers to be able to say: “we can fix it up later on the computer”. So we had to get it right the first time. Ilford made great B&W films at the time and so did Kodak. I’d say the most common film I used was B&W Kodak Tri-X and Colour High Speed (ASA 320) Transparency film for live work. The colour film was a tungsten-based emulsion. It was also common to push films one stop and not lose quality. This provided the opportunity to shoot at faster speeds or attain a greater depth of field (sharpness of depth of subject).

C.B: Any other tips you could give wanna be Coles or Leibovitzes on lighting or filters when shooting in the live forum?

Cole: As a photojournalist, my objective was to record the action in reality without the use of filters or image alteration. Special effects could be created in the printing process in the darkroom with filters and gels. The key was to have the ‘best’ available negative or transparency to work with at the beginning.

There are three important elements to photography: lighting, lighting, lighting. Followed by composition. So the most important piece of advice is to get to the venue early enough to scout out the ideal shooting locations based on your access permissions and review where the lights are: side-lighting, back-lighting, front-lighting.

Then review the types of lighting, troopers/follow spots, and PAR - flood lighting and Fresnel – spotlights. For colour, you need to understand that different types of lighting have different colour temperatures and then there is the understanding of the colour range of the transparency film used and its impact. For example when using traditional transparency films, most red lighting and some deep blue gels became over-exaggerated when recorded, so understanding the colour range of the materials became important.

Today, “we’ll fix it in PhotoShop”. So these split second decisions are not in the equation any more. Digital tonal range from lightest to darkest is now the key critical element; along with the old standard call “sharp focus”. That can also be ‘fixed’ in PhotoShop as well.

C.B: Being a professional at this point did you do your own developing as well like in your earlier years or out source to someone you could trust?

Cole: In the early days, I did all my own film developing and printing for B&W. For colour I used a professional lab that I had a high level of trust in. Later on, I did all my own colour transparency, colour print and B&W work in-house. I just wanted to control the timing and image processing more closely.

C.B: The events themselves must have been an amazing thing to be part of; are there any particular years or cities that stand out in your mind as ‘over the top’?

Cole: Wow! Now that’s a loaded question. How do I boil down 15 active years of rock & roll photography? OK, here’s a few…. Shooting the Rolling Stones in Oshawa, Ontario for a live concert to practice their tour before going on the road…. Shooting Bob Dylan and Gordon Lightfoot at the 1972 Mariposa Folk Festival…. Shooting RUSH for their first poster;  BTO, Lighthouse, Burton Cummings and Dan Hill. I have to say another highlight of my career was an afternoon I spent with Gordon Lightfoot, one-on-one, for a photo shoot. Photo sessions were not Gord’s idea of a fun time, so to smooth out the afternoon; he brought his guitar and gave me a private concert for the afternoon. The photos were amazing!

C.B: You have done a lot of album covers and other related music projects, any favorites? Is this book the first time you were approached to compile your works or have you put anything like this together for a management group or any single artist?

Cole: My album photography spanned many musical tastes from BTO to Mariposa in the Schools, to Peter Appleyard to the Battered Wives. Recently photos from my collection have been used in RUSH’s recently published biography, their documentary and in the last tour book. Downchild Blues Band used several stills in their recent 40 years documentary. The largest collection of my photo to ever be published is in the newly released “40th anniversary of the Juno Awards”. Out of the 150 photos covering 4 decades, the book has 80 of my images representing all the photos of the 1970’s and most of the 1980’s.

C.B; The book is an amazing time capsule of the Canadian Music scene; will we see a follow up maybe of pictures from other events or more behind the scenes and aftermath photos, as we will call them? What’s next for Bruce Cole and Plum Studios?

Cole: We are looking at other book options to zero in on the other incredible music of the ‘70’s. This was the decade that Canadians became recognized without having to leave the country. We are also in development for a TV series. And we have launched a gallery web site at www.plumstudios.com to show the photo collection.

C.B: 2011 will be a great year for the Junos and it is fantastic that your hidden gems can be shared with the artists and the fans on the 40th anniversary. Any plans to pick up the camera and do it all over again?

Cole: I’m planning on relearning my craft as a digital imaging creator. I’ve already got PhotoShop on my computer. Now I just have to learn how to visualize the image at that moment of digital exposure and then visualize it after some digital magic.

C.B: We will watch for more from Bruce Cole and Plum Studios and it is a great piece of Canada’s musical history that you are sharing with the fans for the 40th JUNO Anniversary and we look forward to seeing more on the Plum studios website. 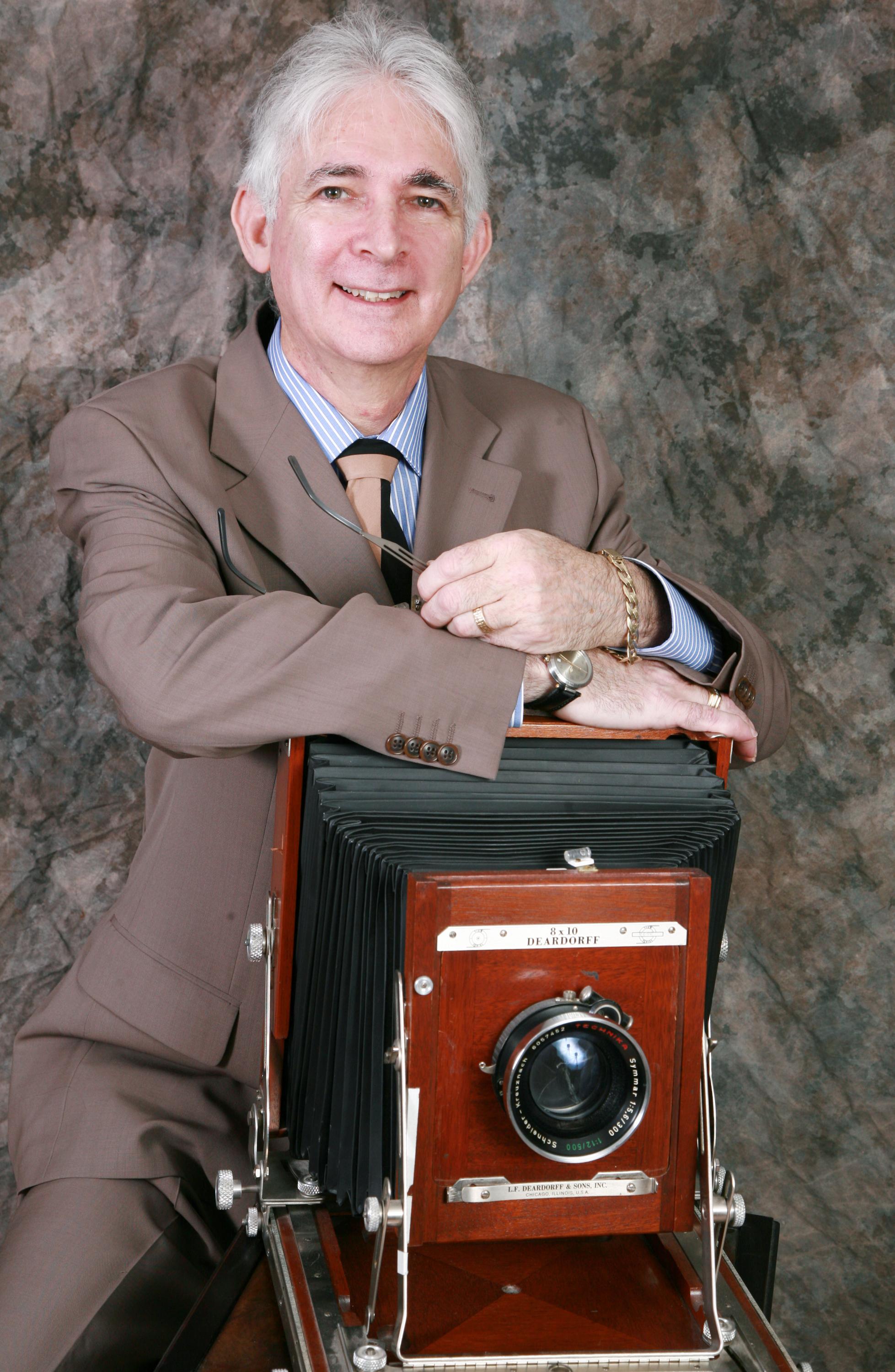 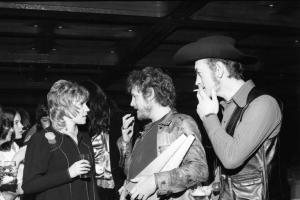 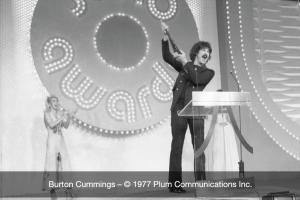 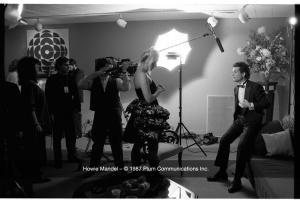 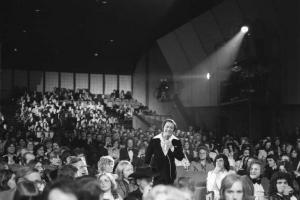