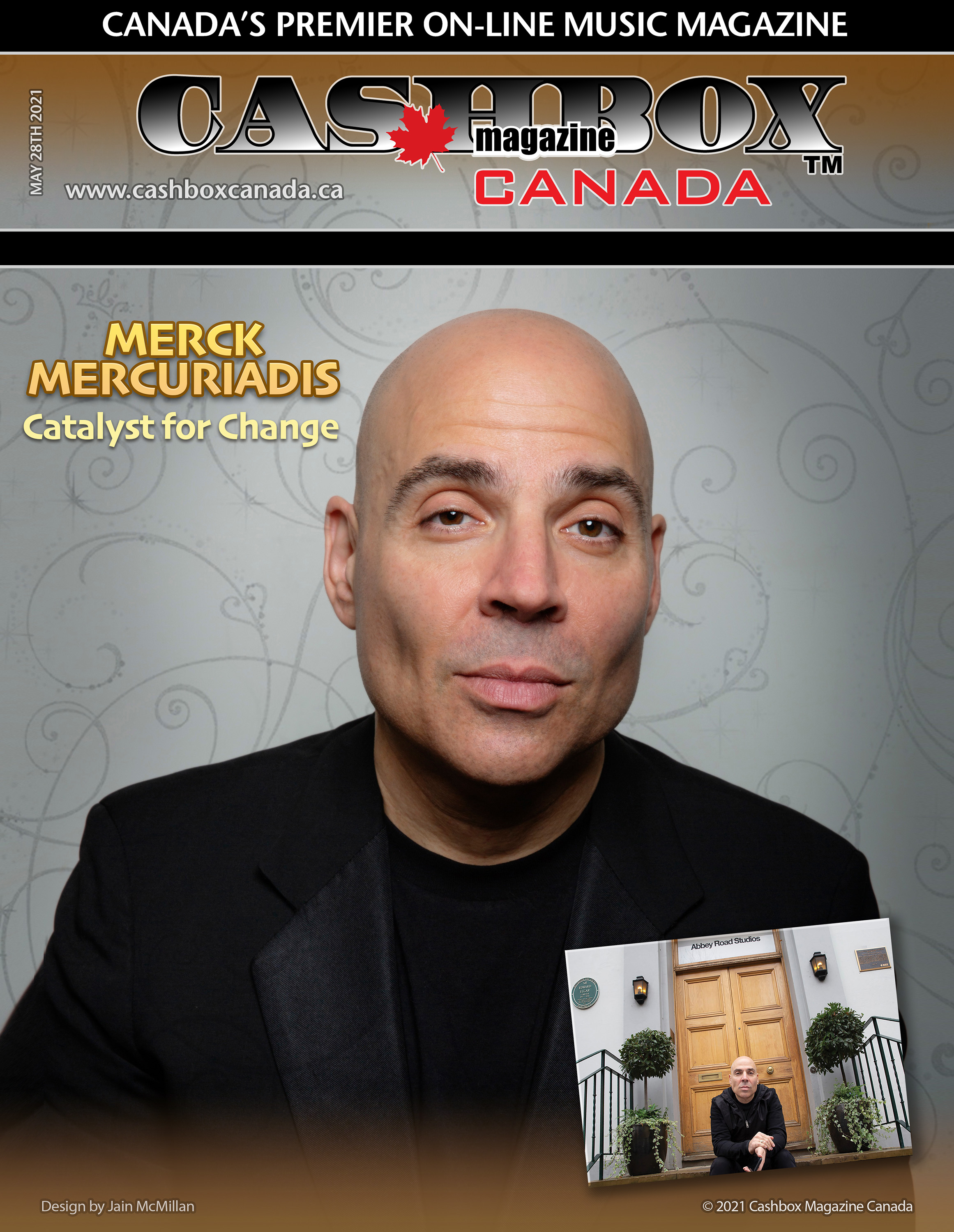 Merck left Virgin Records and decided to leave Canada for work with Iron Maiden in the U.K. after I introduced him to my good friend from Montreal, Susan Leslie. The next time we saw each other he was a Dad and I was in London with Jeff Martin of the Tea Party for Roy Harper’s 60th Birthday Party at Royal Albert Hall till daybreak with Roy Harper. Damn it was an epic party Jimmy Page stopped in, but it was also epic to see my friends, Merck and Susan.

Full disclosure, I too am a big fan of Merck Mercuriadis.  Back in the days of MuchMusic, our nights were full of music, clubs, live shows, backstage hangouts to the wee hours and musical dreams of how to make the music industry better, more ethical, and equitable. In matters of race, there were no matters of race, only music and discovering the next greatest music of our lives, daily. Merck’s love and understanding of music, the artist who creates the music and a profound respect for the songwriters of every type of music is why we are and have always been friends. I miss him, our conversations and the music, so this was a great time to catch up.

Merck’s and Nile Rogers love of music is what drives Hipgnosis. THAT’S the secret SAUCE - Love”!

I caught up with Merck via Zoom to have an up-close and personal talk.

Michael Williams:  You and the family are cool?

Merck: Yeah, everyone is busy at work, everyone else in the company doing lots of amazing things. So I'm proud of them all.

Merck:  I mean, it’s a real effort to change. You know, the way that songwriters have been treated, you know, not to make light of it. But we're old friends…

Michael Williams:  The first songwriters you signed were Black Songwriters, The Dream, and Pooh Bear. Why?

Merck:  Of course, most of the Songwriters that I signed up are Black and Women songwriters

Black music makes the world go round, from Beijing, Brussels to Billings, Montana, you're going to find young people that love Black music and Black Culture. Yet, there's still a tremendous amount of prejudice in this world and to some degree, we're using the influence of HIPGNOSIS to change things.

I spoke to all of our songwriters in Atlanta, and said, I'm going to write this letter, I need to be able to put your names on it, everyone agreed immediately. I basically wrote to the District Attorney of Liberty County, Georgia, saying in short. I've spent $150 million in Georgia, alone in the last 18 months. The people that I've spent it on are all people of color. They not only pay their taxes, but they spend wildly in the economy as well.

So they're making the economy of your state, go round. By the way, they also happen to write the biggest songs in the world for Beyonce, and Rihanna, and Kanye, and Jay Z, Mariah, Madonna, and Britney, and they've got very loud voices of the people that sing their songs. If you don't do something about this, we're going to use our voices, within two days, we got an email back, acknowledging the letter, and two days after that, and the first two people were arrested.

The nice thing, Michael, about being a public company, having the kind of financial where with all that we do, is that, as a public company, there's, (particularly in the UK) there's a strict code of practice, which is under the heading of ESG has to adhere to environmental, societal, and governance.  You have to; show that you are excelling in helping to affect the world in positive ways environmentally

HIPGNOSIS, we have no carbon footprint. We have the highest standards of corporate governance, so we're good from a societal point of view.

It all starts on the one hand, by making money, demonstrating to the financial community, that proven songs that have a track record, are very predictable and reliable in their earnings, therefore investable, the same reason why you invest in Gold, Oil, is because gold and oil are seen as positive assets to invest in, because they have very predictable with a reliable track records.

Well, so does “Good Times” by Chic, so does, all of these other incredible songs, whether it's Beyonce is “Single Ladies”, Al Green “Let's Stay Together”.  In fact, they're better than gold and oil, because, if you wake up tomorrow morning, and there's political upheaval, or some sort of atrocity that's taken place in the world, it's very likely that the price of gold and oil will be affected adversely. Whereas with songs, whether people are living their best lives, and they're doing it to a soundtrack of music, or indeed, whether they're experiencing real challenges, they take comfort, and they escape with music.

It all starts on the one hand, by making money, demonstrating to the financial community, that proven songs that have a track record, are very predictable and reliable in their earnings, therefore investable, the same reason why you invest in Gold, Oil, is because gold and oil are seen as positive assets to invest in because they have very predictable and reliable track records.

Well, so does “Good Times” by Chic, so does, all of these other incredible songs, whether it's Beyonce's “Single Ladies”, Al Green's “Let's Stay Together”.  In fact, they're better than gold and oil, because, if you wake up tomorrow morning, and there's political upheaval or some sort of atrocity that's taken place in the world, it's very likely that the price of gold and oil will be affected adversely. Whereas with songs, whether people are living their best lives, and they're doing it to a soundtrack of music, or indeed, whether they're experiencing real challenges, they take comfort, and they escape with music.

So music is always being consumed. Therefore the revenues from songs are, what the financial community calls uncorrelated?  Music is earning money constantly, it’s always being consumed. The core thesis along with the fact that we had 16 years of disruption, technological disruption in the form of illegal downloading, that made it possible for people to consume music for free, that killed the music business. The only one good thing that came out of those 16 years is that it left these songs at attractive prices. These songs are cheap right now, because of that 16 years of technological disruption.

Now of course, that technology has evolved into streaming, streaming is blowing the pie up again. When we started, there were 30 million paid subscribers to music streaming services there are now 450 million paid subscribers.  By the time we get to the end of the decade, there'll be 2 billion paid subscribers, when that happens, which is critical, music has goes from being a discretionary or luxury purchase to being a utility like cable. Back in the day, the benchmark for extraordinary success in our business was the Platinum record, that’s a million copies in a country that has 360 million people.

One in 360, that immediately tells you that while the average person might love music, they didn't love it enough to put their hand in their pocket and pull out some cash and pay for it, they’re very happy to see you on television, spinning videos, or to turn on the radio. Now, there are 100 million homes in the United States that have a paid music subscription service streaming, subscription service.  So we've gone from one, and 360 people paying for music to one in three and a half people paying for music, that's obviously blowing the pie up.

I remember back in the day, you and I used to have difficulty paying our phone bill, we pay off, we pay our rent, but we could never pay our fucking phone bill. Today, these same people would rather bite off the right arm, than not pay their $10 a month to Apple or to Spotify. It’s a very small price to pay for access to everything, if you want to listen to Beethoven, The Beatles, Chopin or Chic…Indeed, if you want to listen to your old friend,  Billy Newton Davis, it's all there.  (Great duet with Celine Dion, her very first English single,(Can’t Live, Can’t Live Without You) written by Dan Hill, Canadian only release 1989.)   It's all there on one streaming service at $10 a month that is the price point that people have decided it is, people are now happy to pay $120 a year for that kind of access.

That’s the context for all of this investment, that's blowing the pie up, it means that you can give your investors great returns, that's the motive, there has to be a very clear motive and thesis that the investment community understands, the ulterior motive is to use that financial wherewithal and leverage of these great songs to change where the songwriter sits in the economic equation because the songwriter is the low man or woman in the economic equation.

The three biggest song companies in the world being Universal Warner and Sony don't advocate for songwriters, because they're owned by the three biggest recorded music companies in the world, Universal, Warner and Sony.  On that side of the recorded music side of the business, you've got four-fifths of the revenue, they're making an 80% gross margin, and they’re making a 40% net margin. In general, they own those assets. Those master recordings, in perpetuity, as you know, very few artists actually ever own their masters on the fact that they're even fucking called masters. I don't know if you know this, but Pharrell has been very instrumental with Sony. If you're an artist now, and you signed to Sony Records, and I applaud Rob Stringer for this and the team at Sony.

Pharrell went to them as one of their most important artists, and said, “Listen, I don't ever want anyone to sign a contract again, and that uses the words "masters" or "slaves", anymore.”  All credit to Sony who is a progressive company. They removed those words from their agreements.

Michael Williams: While I zoomed with Merck, he was just about to announce his latest signing, the Red Hot Chili Peppers catalogue.

Next week with Merck Mercuriadis we discuss serving the song, song management vs. song publishing, being an advocate for all songwriters and being a catalyst of change.