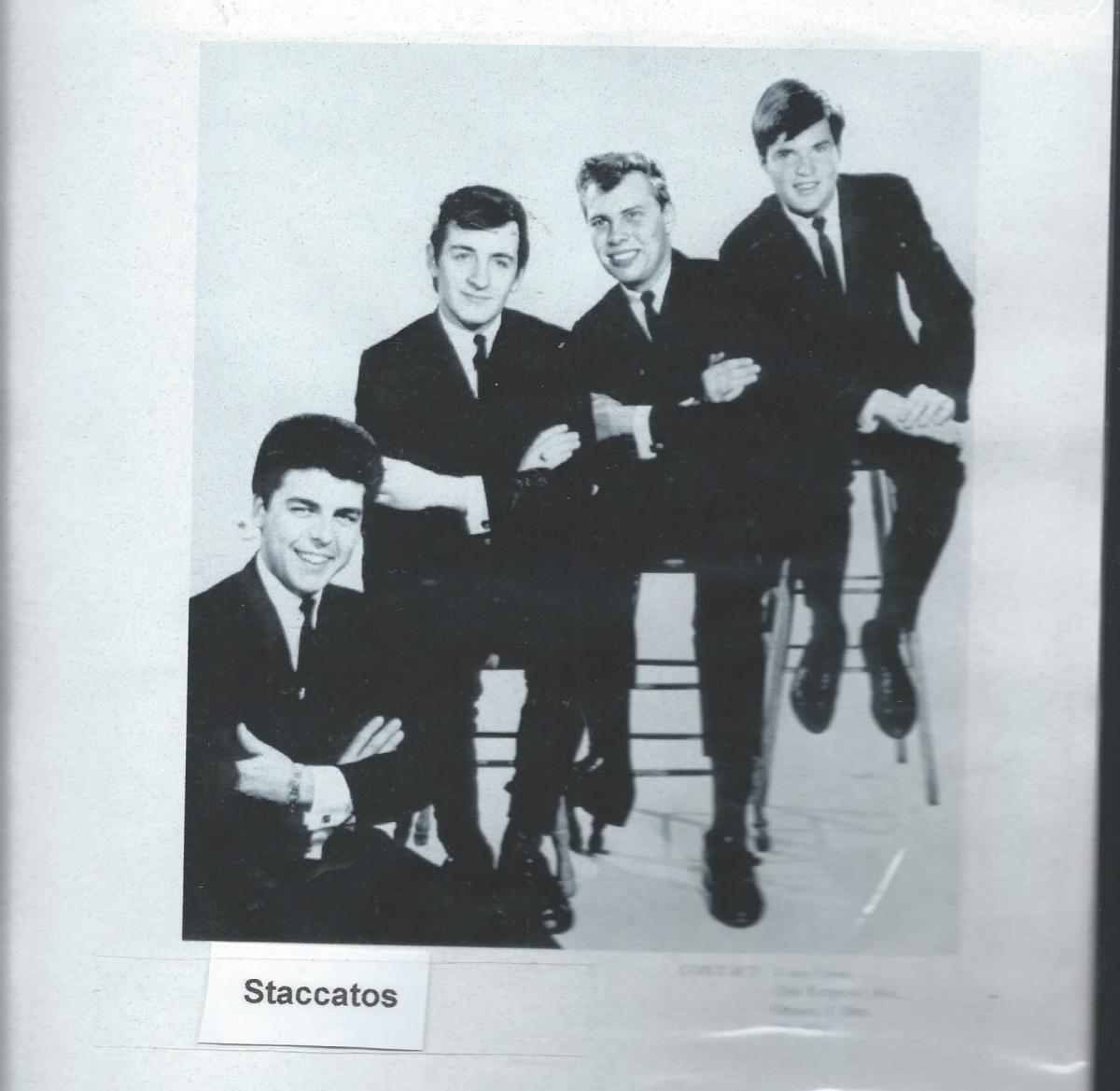 The Staccatos made their debut as a recording act in 1965, with their early singles being written by the team of Craig and Emmerson. After releasing a non-charting single on a small independent label, the group signed to Capitol Records of Canada , and their second single, "Small Town Girl", made it into the Canadian top 20. Several follow-ups also cracked the top 40, and The Staccatos were rising stars in their native country. Their debut album, Initially , came out in 1966, and featured their hits to that point as well as several new recordings.

In the summer of 1966, Mike Bell (Rick's brother) joined the group as a second drummer and third vocalist. Shortly thereafter, the group had their biggest hit to date with "Half Past Midnight", which rose to #8 on the Canadian charts. This was the second Staccatos single written solely by Emmerson, who by this point was writing most of the band's original material. Also in 1967, The Staccatos issued a joint album with The Guess Who , each band taking up one side of the LP.

The Staccatos follow-ups to "Half Past Midnight" did not meet with as much success in Canada. In the US, the situation was worse – the band's singles (released by Capitol and Tower) failed to chart at all. Looking for a new direction, at the end of 1968, Ted Gerow was added to the line-up on keyboards, and shortly thereafter, Vern Craig left. Around the same time, while recording their second full album, the band was prompted to change their name by producer Nick Venet 's comment that the name The Staccatos sounded "dated". After discussing various possibilities, bassist Rading seized upon a song Emmerson had written called "Five Man Electrical Band", claiming that's exactly what the group was. The band's name was duly changed, and Five Man Electrical Band released their self-titled album in early 1969.

Five Man Electrical BandThe group's new single "It Never Rains On Maple Lane" with B side "Private Train" was a mild success in Canada; the A-side appeared at #67 on the charts, but after two weeks on the charts the single was flipped over and B-side "Private Train" made it into the top 40, peaking at #37. Their album, meanwhile, contained a mixture of new material and older recordings originally released as by The Staccatos (including "Half Past Midnight") and was similarly successful in Canada. Follow-up singles failed to chart. At the end of 1969, the band ended their relationship with Capitol and signed with MGM Records.

The band's first two singles on MGM (released in 1970) both charted in the mid-50s in Canada. The group's 1970 album Good-byes and Butterflies created a minor controversy with a front cover picture that featured a marijuana plant; the album was withdrawn and subsequently reissued with a new cover.

In 1971, the band had their first international success when their label reissued the second MGM single "Hello Melinda, Goodbye/Signs", originally recorded in Los Angeles, with the sides reversed. [2] Disc jockeys and the public immediately took to "Signs" (written by Les Emmerson ); it reached #4 in Canada, #3 on the US Billboard Hot 100 , and went to #1 in Australia for nearly two months. It sold over one million copies, and was awarded a gold disc by the R.I.A.A. in August 1971.

In the next few years a number of charting singles were release: "Absolutely Right", "Money Back Guarantee", "Werewolf", "I’m A Stranger Here" and several others, all written by Emmerson. Outside of Canada, most of these were minor hits, but the band continued with a steady flow of releases and concert dates. In 1972, the band issued Coming Of Age , their third album as Five Man Electrical Band. Emmerson, who was more interested in recording in the studio than in playing live, also established a parallel solo career in 1972.

Mike Bell, now going by his birth name of Michael Belanger, left the group partway through the recording of their 1973 album Sweet Paradise, and bassist Brian Rading left just as the album was being finished. The album produced several hit singles, including "I'm A Stranger Here", their highest-ever charting hit in Canada. Emmerson, Gerow and Rick Belanger attempted to keep things going with new players for a time, producing singles in 1974 and '75, with minimal chart success outside of Canada.

Rick Belanger left the group in 1974, leaving Emmerson and Gerow as the only remaining permanent members of the ostensibly "Five Man" band. Shortly thereafter, when 1975's "Johnny Get A Gun" peaked at a lowly #69 in Canada, Emmerson and Gerow decided to disband the Five Man Electrical Band.

In 1986, Emmerson reformed the band for a series of concert and festival appearances, and continued to tour with them over the following decades. The band typically plays a few shows a year, and now performs as a sextet: Les Emmerson (guitar, lead vocals), Ted Gerow (keyboards), Brian Sim (lead guitar), Rick Smithers (bass), Steve Hollingworth (drums, vocals) and Mike Belanger (drums, vocals).

Emmerson has also retained the rights to the band's recordings, and has licensed several 'best-of' compilations on CD.

Tesla scored a hit with a cover of the song "Signs" on their album Five Man Acoustical Jam in the 1990s. More recently, Fatboy Slim released a 2005 single called " Don't Let The Man Get You Down ", based mostly off a looped sample from "Signs" – specifically the opening line, "And the sign said long haired freaky people need not apply."

Brian Rading, bassist and founding member, died on 8 June 2016 of natural causes at his home in Hull, Quebec , after a few-years long battle with throat cancer. He was 69.

"Half Past Midnight" The Staccatos https://youtu.be/9blxLXSQ7Es