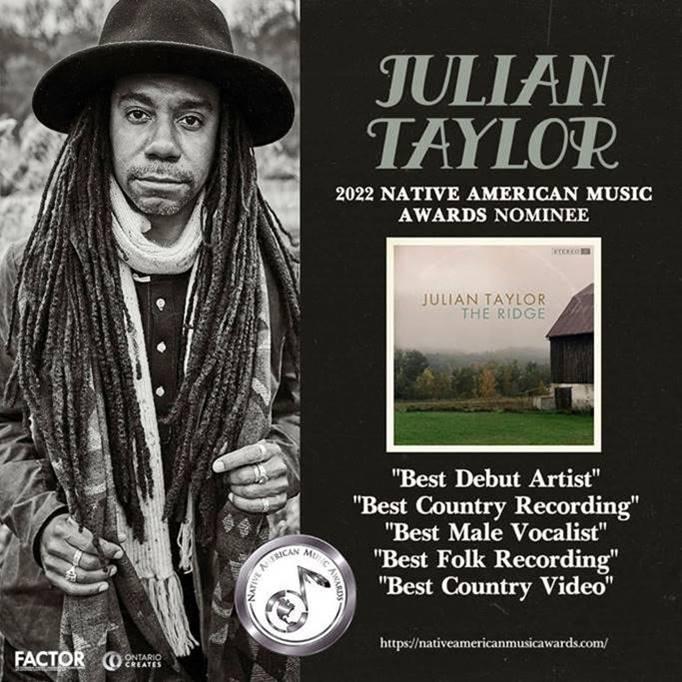 Celebrated Canadian musician Julian Taylor has been nominated for five 2022 Native American Music Awards (aka “The Nammys”). Taylor has earned recognition in the categories of Best Debut Artist, Country Recording, Folk Recording (both for his highly acclaimed 2020 album The Ridge), Male Vocalist, and Country Video (for the title track). For more information please visit any of the links below or Taylor’s.

"I'm extremely grateful to The Nammys for this incredible honour, and that my work has been recognized in such a beautiful way," says Taylor. "Congrats to all the nominees."

Taylor is conscious and proud of his mixed Black and Mohawk heritage. "I come from two strong oral traditions and cultures," he says. "One was stolen from their land and brought here and the other had their land stolen. It’s been an uphill battle ever since and the fight is far from over... I did not grow up on a reservation. I have strong roots in Kahnawake which is a reservation in Quebec, Canada. I have family there and I’ve been visiting since I could crawl." To read more of Taylor’s personal thoughts on the subject, visit his Facebook post.

The Ridge earned eight nominations in 2020 and 2021, including those for two JUNO Awards, the Polaris Long List, and two Canadian Folk Music Awards, in which he won Solo Artist of the Year. Taylor is currently hard at work on a new album, which is tentatively scheduled for release in the Spring of 2022, and he’s excitedly preparing for Glasgow’s annual folk, roots, and world music festival Celtic Connections in 2023 which will mark his first live performance across the pond, with a subsequent tour of the U.K.