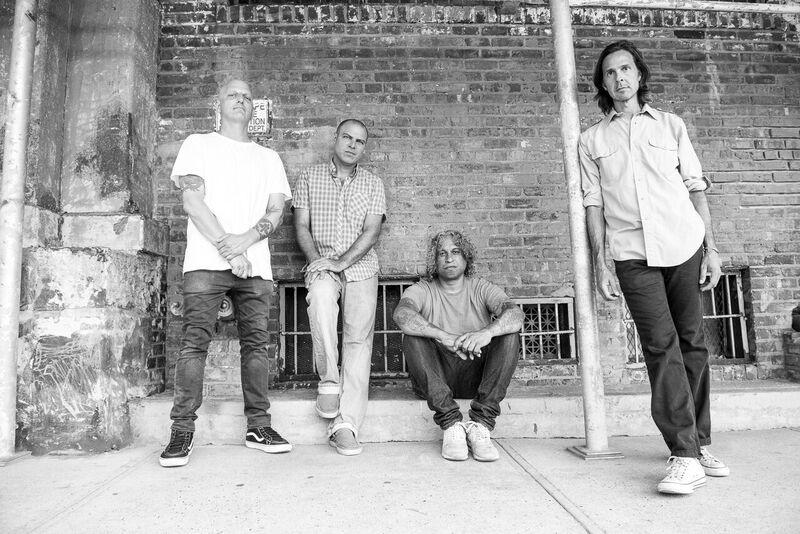 New York City post-hardcore band Quicksand are pleased to announce the upcoming release of Interiors, their first album in 22 years. Interiors features the band’s original (and only) lineup of drummer Alan Cage, frontman/guitarist Walter Schreifels, bassist Sergio Vega, and guitarist Tom Capone. The album will be released on November 10, 2017 on Epitaph.

Quicksand have also shared a new video for the first song shared off the album titled “Illuminant,” the lead single and opening track from Interiors.With its heavy but melodic guitar lines, intense rhythms, and emotionally charged lyrics, “Illuminant” shows the scope of Quicksand’s influence on post-hardcore and indie-rock bands over the last two decades.

Recorded at Studio 4 Recording in Conshohocken, Pennsylvania, Interiors was produced and engineered by Will Yip (The Menzingers, Title Fight, Pianos Become the Teeth). While the album finds Quicksand embracing the cathartic, guitar-driven dynamic of their earlier work, Interiors also takes on a wider spectrum of sound.

“It was all just about being ourselves and who we were as well as who we are,” says Schreifels of the making of Interiors. “We did it for us completely.”

Pre-orders for Interiors are at: http://www.quicksandnyc.com

Formed in 1990, Quicksand made their full-length debut with Slip—a 1993 release recently praised by The A.V. Club as “a nearly flawless record that combines the irony and heaviness of Helmet with Fugazi’s penchant to dismantle sound in the most energetic ways.” Arriving in 1995, their sophomore album Manic Compression appeared at #1 on the Top Five Best Post-Hardcore Records list from LA Weekly (who noted that “if there were any justice in the world, Quicksand would have been the biggest underground band of the ’90s”).

“We were very influenced by Fugazi and Jane’s Addiction” says Schreifels of the band’s beginnings. “But we were doing it in a certain context with an energy that was just special and unique and kind of shined through.”

Throughout the early ’90s, Quicksand toured with bands like Helmet, Fugazi, Rage Against the Machine, and Anthrax. After disbanding in late 1995, they reunited for a one-night performance in June 2012. They’ve since appeared at festivals like FYF Fest and Pukkelpop, and in 2013 embarked on their first North American tour in 15 years.

For more information on Quicksand and Pre-orders for Interiors visit http://www.quicksandnyc.com