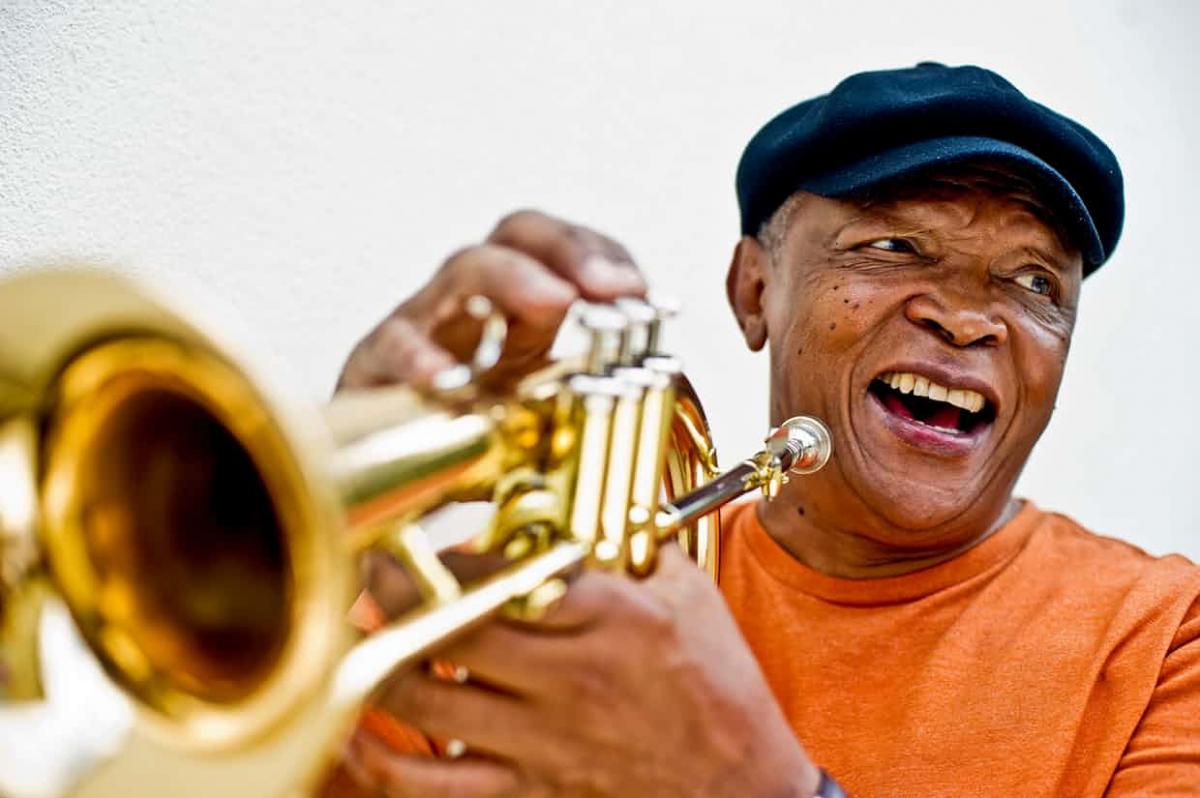 Hugh Masekela, who has died aged 78, was one of the world’s finest and most distinctive horn players, whose performing on trumpet and flugelhorn mixed jazz with South African styles and music from across the African continent and diaspora. Exiled from his country for 30 years, he was also a powerful singer and songwriter and an angry political voice, using his music and live performances to attack the apartheid regime that had banished him from homeland.

Even when he had returned to the country of his birth under the leadership of Nelson Mandela, after having lived and worked in the US and in Botswana, Masekela continued to comment fearlessly on political events in South Africa and around the world, enjoying his status as an international celebrity, playing for presidents and royalty and concert audiences, and often collaborating with other musical greats.

He was born in Kwa-Guqa township, Witbank, a coal mining settlement near Johannesburg. His father, Thomas, was a health inspector and sculptor, and his mother, Pauline (nee Bowers), was a social worker, officially classified as “coloured” in apartheid-era South Africa as she had a Scottish father. Hugh was one of four children in a politically conscious family; his younger sister, Barbara, would eventually become head of the African National Congress’s department of arts and culture. The children were raised by their grandmother, Johanna, and Hugh was always surrounded by music. At the age of four he was a pageboy at the wedding of his Aunt Lily, and was fascinated by the celebrity wedding band, the Jazz Maniacs, and their trumpeter Drakes Mbau.

Hugh was given his own instrument when he was 14. He was then a pupil at St Peter’s, a remarkable secondary school for black children that became a centre for opponents of apartheid before being closed by the authorities. The staff included Oliver Tambo, later leader of the ANC, and Trevor Huddleston, later Archbishop Huddleston, president of the British Anti-Apartheid Movement. The young Masekela was always in trouble. “I was one of the worst delinquents”, he once told me, “always fighting with the teachers or going into town stealing.” He was sent to see Huddleston because “you’d be sent to him when everything else had failed”.
Masekela had wanted a trumpet, he said, after seeing the 1950 film Young Man With a Horn, and recalled that he told the priest: “If I can get a trumpet I won’t bother anyone one any more.” Huddleston managed to raise £15 (“a lot of money in those days”) to buy the instrument, found a black Salvation Army trumpeter to teach Masekela, “and then he sat outside the school making hideous noises”. Other pupils naturally wanted instruments as well, and the Huddleston Jazz Band was born. They wore black trousers and grey silk shirts, and played American rather than African music. Along with Masekela, the band featured the trombonist Jonas Gwangwa, who would also become a star.

Huddleston continued to help Masekela even after the priest had left the school and South Africa. In 1956, when he was in the US publicising his book Naught for Your Comfort, he told Masekela’s story to a journalist, who suggested that it might interest Louis Armstrong, the best known trumpeter of the day. Armstrong was fascinated and handed Huddleston one of his horns to give to Masekela. “I sent it straight to South Africa, and I have a wonderful picture of Hugh jumping for joy,” said Huddleston.

Masekela’s skills as a trumpeter increased and so did his fame. In the 1950s he played at fundraising events for the ANC in the years before it was banned, with Mandela among those who came to watch. He explored South African styles and avidly followed developments in the American jazz scene as he developed his distinctive Afro-jazz sound. He joined Abdullah Ibrahim (then known as Dollar Brand) and Gwangwa in the Jazz Epistles, who in 1959 recorded the first album by a South African jazz band, Jazz Epistle Verse 1.

In the same year he teamed up with Gwangwa and others in the band for the adventurous hit musical King Kong. Billed as an “all-African jazz opera” its story of a boxer had an all-black cast and starred the country’s finest female singer, Miriam Makeba.

Such an extraordinary flowering of black culture could not last long in the apartheid era. Makeba left the country and her citizenship was revoked because she had taken part in the anti-apartheid film Come Back Africa. In 1960, the year of the Sharpeville massacre and the banning of the ANC, Masekela also left. He was lucky to get out, he said, for his angry opposition to apartheid had already come to the attention of the authorities.

He travelled first to London, where he was disappointed by the jazz scene, and then to New York, where, like Makeba, he was helped by the musician and activist Harry Belafonte. Masekela enrolled at the Manhattan School of Music and immersed himself in the city’s jazz scene, watching Miles Davis, John Coltrane and Thelonious Monk. He was advised by Dizzy Gillespie and Armstrong to develop his own, African style, and in 1963 released his debut album, Trumpet Africaine. In 1964 he married Makeba.

Masekela’s angry political stance was not altered by his move to the US. He claimed that the South Africans passed information about him to the Americans, and that his phone was tapped in New York. He began to identify with the black power movement, and in 1966 played at the Watts festival on the anniversary of the riots in that black Los Angeles neighbourhood.

In 1967, now living in California and having divorced Makeba after only two years of marriage, he played at the Monterey festival alongside Janis Joplin and the Who.

The following year he released the single Grazing in the Grass, an instrumental produced by his friend Stewart Levine that became a massive hit, topping the US charts for three weeks. Masekela was awarded a gold disc, an extraordinary achievement for an African artist in the US. He became a celebrity with a house in Malibu and was befriended by stars including Peter Fonda and Dennis Hopper, but his record company found him increasingly hard to handle.

The cover of his Emancipation of Masekela album (1966) showed him dressed like Abraham Lincoln and was boycotted by distributors in the American south. Later, he followed his easygoing hit single with a furious, experimental set that included songs about Vietnam and the plight of migrant workers in South Africa. His house was raided by the police and he was put on probation, avoiding a prison sentence on drug charges only because they had had no proper search warrant. Promoters and universities cancelled his bookings, but he continued to record powerful albums, collaborating with Gwangwa and another fine South African musician, Dudu Pukwana.

After 12 years in exile he decided to go back to Africa to explore the music of countries he had never visited. He travelled across west Africa, from Guinea, where Makeba had moved with her new husband, Stokely Carmichael, and then to Zaire (now the Democratic Republic of the Congo). In 1973 he spent time in Kinshasa, meeting such musicians as the guitarist Franco, and went on to Liberia, Ghana, and Nigeria, where he stayed for a month with Fela Kuti. The rebellious Kuti introduced him to the Ghanaian band Hedzoleh Soundz, with whom he recorded and later toured in the US.

He returned to Africa with Levine in 1974, when they put together the Zaire 74 concerts that preceded the Rumble in the Jungle boxing match in Kinshasa between Muhammad Ali and George Foreman. Angry disputes with the promoter Don King meant that the historic recordings of the African artists involved, including Franco and Makeba, were released only in 2017.

Masekela kept travelling, but in 1980 he settled in Botswana, across the border from South Africa, where he lived for more than four years. A mobile studio was shipped to him from California and he recorded the album Technobush, which included the bestselling Don’t Go Lose It Baby. In 1986 he founded the Botswana International School of Music.

By now he was rebuilding his following in the west, helped by growing interest in “world music” and African styles. In 1987 he and Makeba joined Paul Simon on the world tour promoting Simon’s massively successful album Graceland, which had been partly recorded with black musicians in South Africa, despite a UN cultural boycott.

Masekela said he was backing Simon because Graceland was giving black South Africans global exposure. Other musicians disagreed, and when the Graceland tour reached London, protesters outside the Royal Albert Hall included Jerry Dammers and Billy Bragg. Inside, Masekela performed his rousing anti-apartheid anthem Bring Him Back Home (Nelson Mandela) and his song about migrant workers, Stimela.

The following year he and Makeba again shared a stage in London – this time at the Nelson Mandela 70th Birthday Tribute at Wembley Stadium, an event that honoured the jailed South African leader and was broadcast to 67 countries. Masekela and Makeba performed Soweto Blues, which mourned the deaths of the many children killed by police during the 1976 Soweto uprising.

Mandela was released in 1990, and with the ending of apartheid Masekela was able to return to South Africa after an absence of 30 years. Rather than retire, he threw himself into a series of new recordings and projects, and began to achieve the deserved status of an international celebrity. In 1996 he played for President Mandela and the Queen during Mandela’s state visit to Britain. He responded by dancing in the royal box.

In 2010 he was the opening performer in the globally transmitted concert that kicked off the football World Cup finalsin South Africa, and in 2012 he was reunited with Simon for a world tour celebrating the 25th anniversary of the Graceland project. This time there were no protests. Later that year he co-created the Songs of Migration jazz musical, which explored the music of South Africa, Nigeria and the American South and was staged around the world.

Having issued more than 40 albums across his career, his final one was No Borders, in 2016. Among his many awards was South Africa’s highest, the Order of Ikhamanga.

Masekela’s second marriage, to Chris Calloway, daughter of the jazz artist Cab Calloway, ended in divorce, as did his marriages to Jabu Mbatha and Elinam Cofie.

He is survived by his son, Selema (also known as Sal), and daughter, Pula Twala, from other relationships, and by his sisters, Elaine and Barbara.