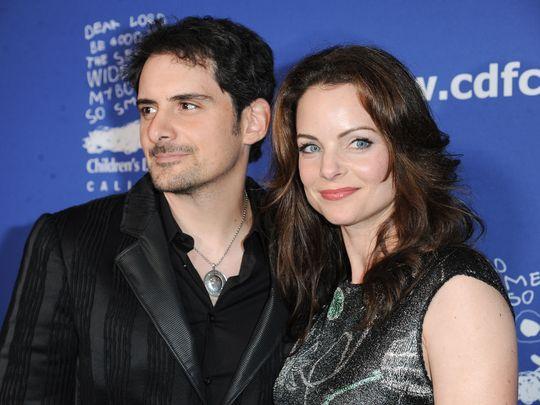 Country singer Brad Paisley and his wife, actress Kimberly Williams-Paisley, have teamed with Belmont University to open The Store, a modern version of a food pantry that is set up like a free grocery store.

“This is a grocery store with dignity for people who have fallen on hard times,” said Paisley, president of The Store’s board of trustees. “All of us are one unforeseen disaster away from rock bottom. It’s nice to think about a place where when that happens to someone, they can use it to get back on their feet.”

Located at 2005 12th Ave. S. next to Belmont University’s Ministry Center, The Store will partner with Second Harvest Food Bank of Middle Tennessee and other organizations to provide both fresh and nonperishable groceries to individuals and families in need for one year. Customers will be referred by nonprofit and government agencies. The nonprofit has an initial goal to serve 3,000 people per year.

"It’s that Billy Hill song, 'There’s Too Much Month at the End of the Money,'" said Pete Fisher, co-chair of The Store’s board of trustees and CEO of the Academy of Country Music. “A lot of times when people fall on tough times, they don’t need a lifeline for a lifetime, they just need a bridge and the store affords those families a dignified way to cross that bridge and achieve that self-sufficiency.”

The Paisleys were inspired to bring the concept to Nashville after taking their young sons to volunteer at the similarly organized Unity Shoppe in Santa Barbara, California. Paisley explained it was near Thanksgiving and his wife thought their children were acting spoiled. They took the boys to volunteer at the Unity Shoppe to help them understand that other people were much less fortunate. But the day turned out to be a learning experience for the entire family.

“It was inspiring because these people have dignity,” said Paisley, a Belmont graduate. “It’s not a scene from ‘Oliver Twist.’ These people are able to sit there and feel very, very normal in the eyes of their kids. I remember … thinking, ‘Why isn’t this everywhere?’ Essentially, we got this idea that it could be a very effective thing in Nashville.”

The Unity Shoppe and The Store won’t be identical, just based on the same principles. Like The Unity Shoppe, The Store isn’t meant to be a permanent solution but instead a “temporary Band-Aid on the road to self-sufficiency,” Williams-Paisley said.

“So many people are making great choices in their lives,” the actress explained. “It’s not like they’ve made major mistakes, they just need a little extra help and we want to be a resource for those people.”

The extra help will come in many forms. In addition to groceries, The Store also plans to set up a toy aisle over the holidays. Throughout the year, they will accept donations of new, unopened toys. At Christmas, families can shop from those items to ensure children receive the toys on their wishlist.

The Store will also provide on-the-job training, Williams-Paisley said. And because of The Store’s partnership with Belmont University, which will be piloting Healthcare and Legal Aid Ministry Clinics, all of the charitable groups will work together to provide a wide range of services to the city’s vulnerable population.

“At Belmont, we believe that the greatest privilege that anyone can ever have is to be in a position to help and serve another person,” Belmont University President Dr. Bob Fisher said. “Brad and Kim are living out that mission in an extraordinary fashion in every aspect of their lives, particularly through the creation of The Store. We are proud to partner with them on this initiative, and I’m excited to watch as our current students pour their gifts and abilities into supporting the needs of The Store’s patrons.”

Nashville-based attorney Megan Zarling explained that Nashville’s continued population growth equates to a 56 percent increase in the volume of people seeking support at area food banks. The Store, named so to normalize the shopping experience for families, will help take some of the pressure off other area food ministries.

“The majority of people are completely misguided about what poverty and hunger look like,” said Zarling, chair of The Store's board of trustees. “Most people look at hunger like you’re walking the streets or you’re walking into a homeless shelter. That’s simply not true, especially this day in time. Hunger looks like you and I and one paycheck away from not being able to go to the grocery store. Studies show the last thing you pay for is food.”

The Store’s "Brick By Brick Campaign" to raise funds for construction of the storefront and establish funding to meet the operational needs for food is underway. About $500,000 is needed before groundbreaking with a total construction estimate of $1.2 million. The Paisleys will donate an initial gift to kick off the capital campaign. Donations are accepted at www.thestore.org.