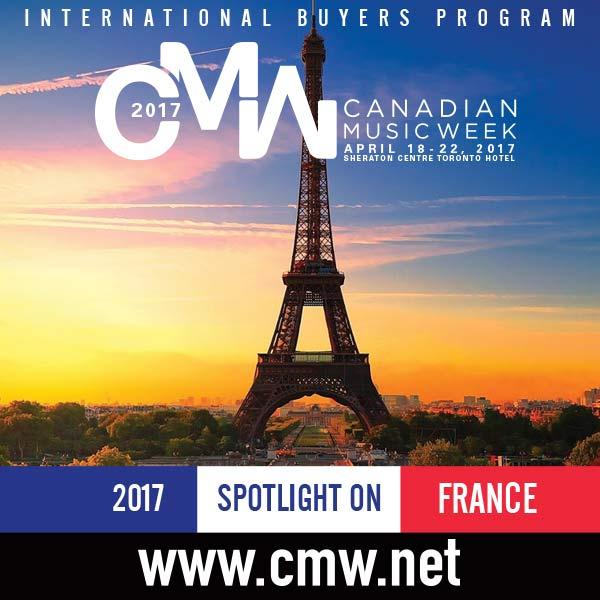 The 2017 ‘Spotlight on France’ marks the first-ever official mission from France to CMW, and is long overdue.

The Canadian Association for the Advancement of Music and the Arts (CAAMA), in association with Canadian Music Week, is facilitating access for Canadian artists and music companies to do business with music companies and market specialists from France.

With a population of 66.7 million, France is ranked by TheInternational Federation of the Phonographic Industry (IFPI) as the 5th largest music market in the world for recorded music with $USD 809 million in trade value. France is also ranked 5th worldwide for both physical and digital.

In France, streaming revenues grew last year by a remarkable 48.7 per cent. Streaming is well on its way to overtaking physical, with income from the consumption of music streams on ad-supported video services now equal to the revenue from vinyl sales (US$12.6M vs. US$12.7M.)

France ranks third for both Synchronization and Performing Rights. Streaming has increased its market share from 16% in 2014 to 24% in 2015. The market is projected to reach 1.8 billion in 2016.

Technology is changing music consumption in France, yet 42M French still tune in to some 250 radio stations every day. More than half of France uses a cell phone, with 36.56M mobile phone users, and expected to reach to 55.6M (or 83%) by 2021.

More blogs per Inhabitant than any other country

France has more blogs per inhabitant than any other country, which indicates potential opportunities to promote music through social blogs and platforms.

The SPOTLIGHT ON FRANCE at CMW 2017 will provide a platform for Canada’s artists to promote their music to buyers and industry from France, and a unique opportunity for Canada’s Francophone community. Although French is the country’s official language, France hosts another 75 languages including 24 European languages – due in part, to its proximity to so many different European countries.

In April 2017 in Toronto, CMW will be hosting labels, booking agents, festival organizers, promoters, talent buyers and industry specialists from the entertainment sectors in order to open new trade routes for Canadians who are interested in furthering opportunities with these two key European markets as part of a Spotlight on the France and Focus on Italy.

CAAMA will provide a market intelligence report and trade support for Canadian artists and music companies to do business. The report will include an in-depth overview of the territories and we anticipate the report will serve as an invaluable resource in future preparations for the 2017 Spotlight and Focus activities.