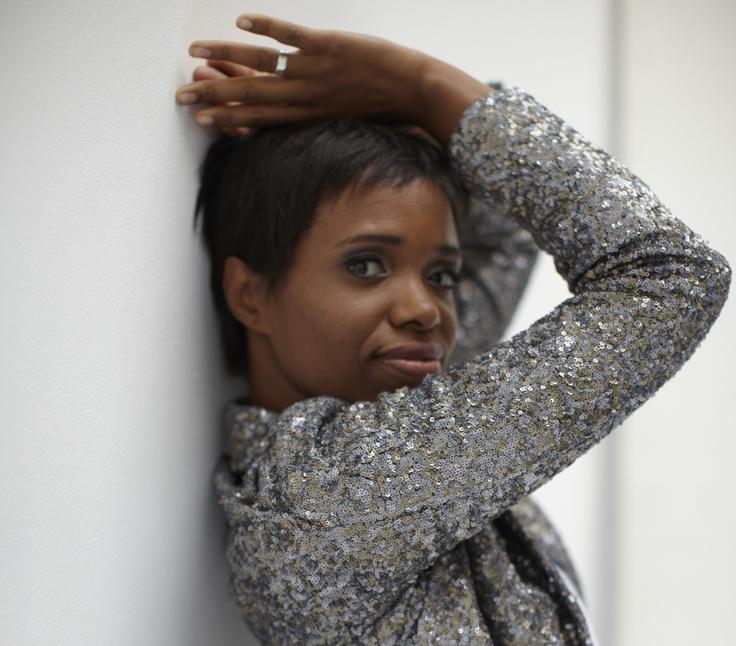 Returning to Toronto for her first appearance since being disabled by a lightning strike, Kellylee Evans brings her trio to Toronto for an evening of her full repertoire. The Ottawa based Universal France recording artist and JUNO Award winning chanteuse has achieved worldwide acclaim with her successful adaptation of Nina Simone’s songbook with charm, grace and full tilt passion. ~We are delighted that Hugh’s Room Live will host Kellylee’s return to strength.

The Canadian rising star singer/songwriter Kellylee Evans is a chameleon-like performer, whose natural charm and improvisational jazz vocal style have shined on her adventurous journey through jazz, soul, pop and hip-hop over the past decade. In that period, she released two indie solo albums of original songs in Canada, earned two Juno Award nominations (winning “Best Jazz Vocal Album” for~Nina, her impassioned tribute to Nina Simone), captivated adoring French and Canadian fan bases and performed around the world, opening for such stars as John Legend, Dianne Reeves, Derek Trucks, George Benson and Willy Nelson. She is about to stun America with her U.S. debut on Motéma Music, I Remember When (July 22, 2014), on which she brilliantly refreshes and puts her stamp on songs by hip-hop royalty Eminem, Dr. Dre, Snoop Dog, Kanye West and others.

Not bad for a mother of three, who went straight from singing in the shower to performing live at the Kennedy Center where she came in 2nd place in the Thelonious Monk Jazz Competition in 2004, as judged by Quincy Jones, Al Jarreau, and Flora Purim. The inspiringly motivated Kellylee threw herself into her dream of singing after enduring the death of her mother and has never looked back. Her unfettered determination enabled her to overcome being struck by lightning last year at her home in Canada near Ottawa. The rare incident made national news, and though suffering much pain and unable to walk at first, Kellylee didn’t cancel a single date. She chose rather to be helped on stage, where she performed exceptionally well while seated throughout her summer touring schedule.
“I inherited a real joie de vivre from my mother, and my French is pretty decent now. But music really is one language worldwide, as is dance. When I’m on a stage, I’m happy and want to share that with the audience. I keep reminding myself how lucky I am. Whether I’m opening for Tony Bennett at a big festival or performing in a little club in front of thirty people, this is still a dream.”

Kellylee has had her sights on launching her career in America since she began singing, and is poised to realize that dream with~I Remember When, a signature album that showcases an emerging artist and songwriter with a truly original voice. Dynamic, hip and modern, her warm, soulful timbre reminds you of fellow true originals of her generation, such as Amy Winehouse and Erykah Badu. The album captures her phenomenal voice, effervescence and electrifying convergence of musical styles from her generation and before with an arresting combination of jazz, soul, pop and hip-hop grooves that feel simultaneously fresh and retro.

Kellylee created the album with co-producer/pianist Eric Legnini (a much in-demand artist/producer working out of Paris), whom she met through co-producer Sébastien Vidal, a key programming director for France’s taste-making TSF Jazz radio station, and for the popular Paris jazz club, Duc des Lombards. “It’s fair to talk about a soul/jazz aesthetic, because we all grew up with the same music,” explains Kellylee. “There’s a hip-hop feel that comes from our improvisational response to samples we use, and our originals carry these contemporary influences too. Eric has an incredible collection of old soul records. Sébastien knows jazz, not only what came before but also what’s happening today. When we started this whole thing, it was like we’d switched on some time machine.” All that remained was for them to give body and meaning to such an eclectic repertoire, and they have.

I Remember When, originally recorded in Belgium and released in France by Universal Music, comprises 13 tracks and features 9 originals penned by Kellylee and Legnini. The US version includes three new tracks: “Built to Fly,” “One More Lover” and “Again ”. The album opens with an unforgettable introduction to Kellylee – “My Name Is” – an original song inspired both by Eminem’s song of the same name and his classic rap hit, “Stan,” which drops as the second single on July 1st. The song is driven by a catchy baritone sax line and establishes her modern/retro jazz/soul groove. The irresistible melody of “Alors on Danse,” the world-wide club hit by rising Belgian rapper Stromae, forms the backbone of the next track, “And So We Dance,” which is available now on iTunes as the first single from I Remember When. The wonderfully choreographed music video of this song, directed by famed French director Thierry Theston, should not be missed.