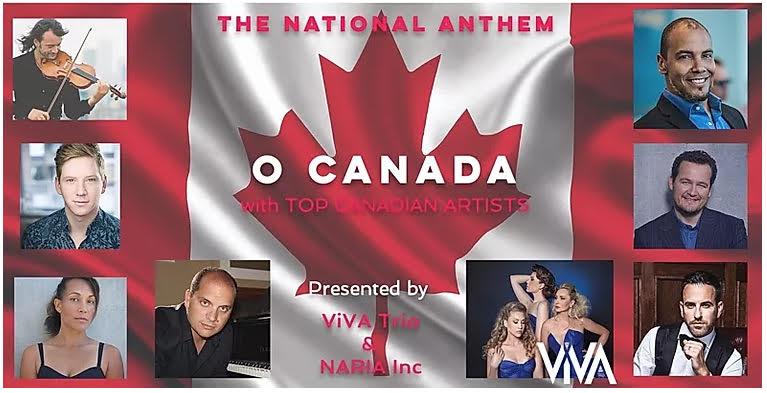 The multi-date performance will feature ViVA Trio’s sopranos Anna Bateman & Katya Tchoubar and mezzo-soprano Erin Fisher — a stunning set in their own right.

The collaboration is set to honour the spirit of Canada Day and create a sense of community — most especially whilst the COVID-19 pandemic keeps Canadians at home. “This Canada Day will be one that we all remember forever, for numerous reasons,” ViVA Trio’s Erin Fisher says. “We hope our version of the anthem will lift people’s spirits, and overflow with Canadian pride.”

“We are connected to each of these wonderful performers, and hope that this anthem creates the feeling of community that we have within this group of artists,” Anna Bateman agrees.

“Regardless of the situation, we want to kick off this Canada Day with a bang!” Katya Tchoubar, who edited and produced the video and sound files as well, adds. “Incredible Canadian talents all coming together!”

International vocal group ViVA TRIO earned multiple standing ovations from audiences in Europe, the USA, and Canada with the release of their debut album Nothing Else Matters.

Member soprano Anna Bateman has spent many summers singing in Europe as a solo opera singer, has numerous operatic and theatre roles to her credit, and performs regularly with symphonies as a soloist. Mezzo-soprano Erin Fisher graced Toronto’s Four Seasons Centre stage as a soloist at the age of 22, performed as a soloist in Europe, USA, and Canada, and sings opera, jazz, musical theatre, and pop.

Producer, songwriter, and vocal diction coach, and soprano Katya Tchoubar is also a member of the European touring group “Ukrainochka,” founded NARIA group and is the owner of NARIA music label.

Gavin Hope is a three-time JUNO Nominee, both as a solo vocalist and as a member of the iconic a cappella group, The Nylons. Hope recorded six studio albums with The Nylons, and two successful solo albums, which charted Top 40 nationally.

Rachel Luttrell, accomplished singer & actress, Luttrell starred in the Sci-Fi series Stargate: Atlantis, and has graced broadway stages nationally and internationally, and has released her first CD, I Wish You Love.

Vasil Popadiuk, international violinist, Popadiuk has toured with many prestigious European troupes, performing for King Hussein of Jordan & Queen Sofia of Spain. He also performed at the 1988 Calgary Winter Olympics.