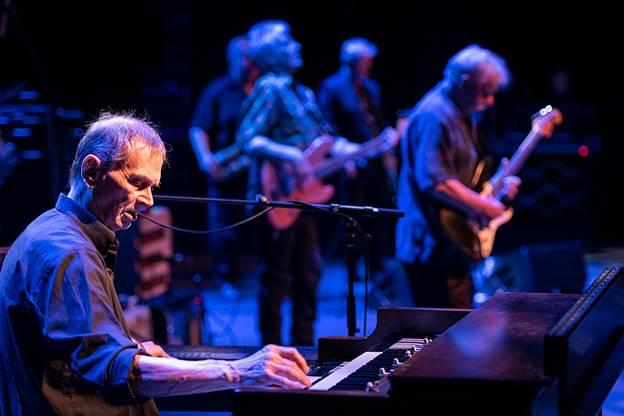 Internationally renowned Canadian keyboard player, Michael Fonfara has died in a Toronto hospital on January 8, 2021, due to complications from his two-year battle with cancer. He was 74.

Born in Stevensville, ON, Canada in 1946, the former Lou Reed keyboardist/bandleader appeared on nine of Reed's albums between 1974 and 2005, including his highest charting US album (#10) Sally Can't Dance on RCA, as well as Rock and Roll Heart, Street Hassle, The Bells (which Fonfara executive produced) and Growing Up In Public that was co-written and co-produced by Fonfara for Clive Davis' Arista Records in 1980.

A supremely talented musician, Fonfara loved many different styles of music, performing on British-American Rock band Foreigner's iconic album 4, produced by Mutt Lange, including their Top 5 Billboard Hot 100 hit "Urgent". He also recorded with The Everly Brothers, Rough Trade, Rhinoceros, Electric Flag and was a current and 30-year plus member of Canadian blues legends Downchild, who are perhaps best known as the inspiration for Hollywood stars Dan Aykroyd and John Belushi's hit film The Blues Brothers, until his untimely death.

"He`s the best musician I`ve ever worked with," states Downchild leader and co-founder Donnie Walsh. Bassist Gary Kendall echoes that sentiment "Yesterday we lost a brother, a band mate, a co-writer and a dear friend. If you met him, you loved him. A creative genius."

Fonfara's final recording was Downchild's Live At The Toronto Jazz Festival, recorded at their 50th Anniversary party in 2019, where he performed live alongside special guests Dan Aykroyd, Paul Shaffer, David Wilcox, Kenny Neal, Gene Taylor and Erja Lyytinen. The new album was just released worldwide on October 16, 2020, as the final chapter of his illustrious career.

2018 Juno Award (Canadian equivalent of a Grammy Award) winners, Downchild, include some of the most well-respected musicians in Canada, who have performed together for over 25 years.

Michael Fonfara also had a long-standing Saturday afternoon gig with Johnny Wright and Robbie Rox, with a remarkable run of 27 years in the Beach at Quigly’s which became Outrigger. The gig was temporarily cancelled due to COVID but sent to return when the bans were lifted. Here is what bandmate and friend Robbie Rox had to say about Fonafara on his Facebook page: “RIP Michael Fonfara who I loved to call Fonfy or Fonfy Face, or 'The Great Fonfaroni' and he would respond by calling me 'Rob The Throb' lol, seen here on the left with me and Johnny Wright in a photo taken at Quigley's in the beaches some years ago. A gig I did with these guys every Saturday afternoon for 27 years playing percussion and back up vocals, right up until the March 2020 lockdown. I thoroughly enjoyed those matinees and life just won't be the same without him when we resume some day in the uncertain future.I am deeply saddened by the passing of this great musician, friend, father and grandfather. He will be greatly missed.”

Michael Fonfara passed away on January 9, 2021 and is survived by his wife Avril, his daughters Ashley and Ciara and his grandchildren Brooklyn, Camden, Jamie, and Jaxon.

Editor’s Note: Since the passing of Michael Fonfara we have been flooded with stories and memories of this iconic musician. We would love to have your own personal stories posted here so they will appear on our social media links. Please feel free to also add video footage of Michael if he played with you (and there are so many this gifted musician played with)