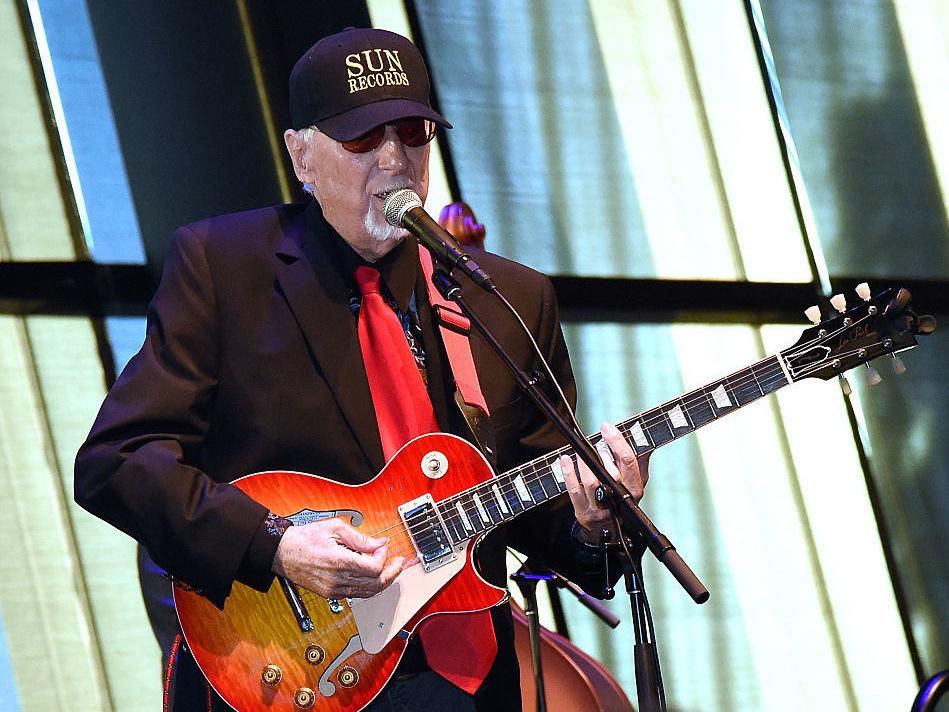 Photo: Sonny Burgess, performing at the Country Music Hall Of Fame in Nashville in 2015
Cashbox Canada

Submitted by Cashbox Canada
Photo: Sonny Burgess, performing at the Country Music Hall Of Fame in Nashville in 2015

Burgess made his career when he became one of Sam Phillips/Sun Records' stars, with signatory whoops and howls all along accompanied by his furious guitar.

Born May 28, 1929, Burgess was raised on a farm near Newport, Arkansas. He grew up listening to shows from the Grand Ole Opry, and started out playing with friends in local bars and dance halls in a band they called The Rocky Road Ramblers. His original dream was to be a professional baseball player, but after a couple of years spent in the minor leagues, Burgess entered the U.S. Army, and served in West Germany during the Korean War. After advice from Sun record producer Sam Phillips, the group expanded to form the Pacers, at first called the Newport Pacers. Burgess was sharing dates with the likes of Elvis Presley and Johnny Cash.

In recent years, Burgess was one of the hosts of a weekly program for member station KASU at Arkansas State University in Jonesboro, Ark.; the show was named We Wanna Boogie, after one of the songs on Burgess' first recording for Sun Records.

"He had a true R&B voice, like a tenor sax in full cry — short on subtlety and delicate shadings, but a magnificent rock'n'roll instrument," music historians Colin Escott and Martin Hawkins wrote in their 1991 book Good Rockin' Tonight: Sun Records And The Birth Of Rock 'N' Roll. They continued, "Burgess' vocals were complemented by his guitar playing: rough, intense and blues-drenched."

With all the elements that Philips had been looking for finally in place, The Pacers went to Memphis in 1956 to audition again at Sun. Philips promptly had them record two sides: "We Wanna Boogie" and "Red Headed Woman."

The record was a hit, and live audiences loved their frantic energy and showmanship — but a string of follow-ups for Sun fared poorly, as did a single for Philips International. Burgess' career as a frontman continued to dwindle, and by 1959, he was playing in country singer Conway Twitty's band. Within a dozen years, he had left the music business altogether, and pulled together a new life for himself and his family by working as a traveling salesman.

In the 1990s, however, European fans' enthusiasm for rediscovering old Americana was a vehicle for Burgess' contributions to resurface, and he enjoyed a resurgent musical career. He recorded two albums in his sixties: 1992's Tennessee Border, for Hightone Records, and 1996's Sonny Burgess on Rounder Records, produced by Garry Tallent of the E Street Band and featuring a previously unreleased Bruce Springsteen tune called "Tiger Rose."

Burgess eventually reunited with The Pacers, who were inducted in 2002 into the Rockabilly Hall of Fame and played dates in the U.S., Canada, Japan, Europe and Australia.

John Burgess' (the artist’s son) told the New York Times that the cause of death was complications from a fall, but the Arkansas Democrat-Gazette noted Burgess had also been struggling with issues related to diabetes.