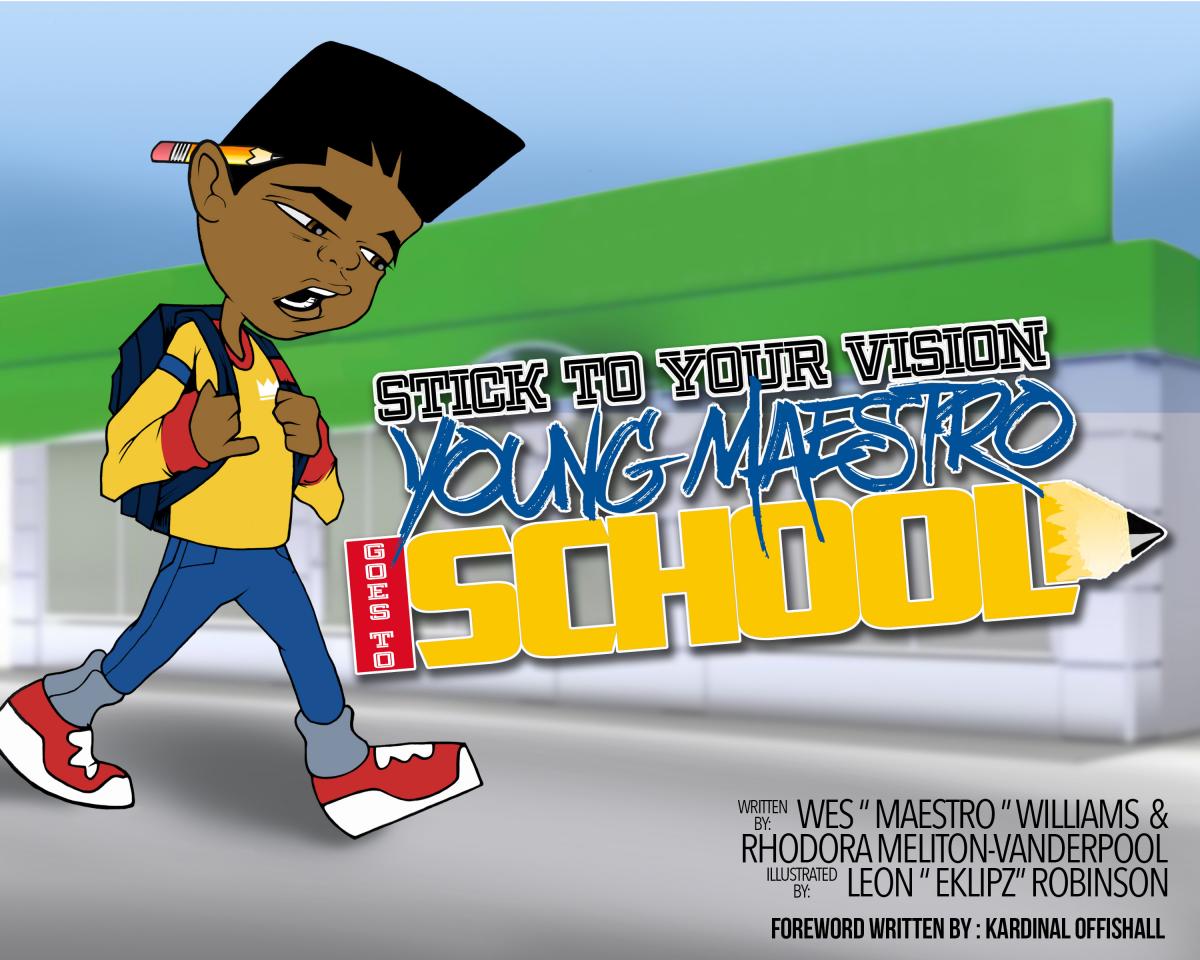 Telling the tale of a young Maestro as he finds new adventures, both in school and as he’s introduced to the world of hip hop, readers follow along as he competes in the school’s writing contest against ‘Julia the Great’ and ‘Hakeem the Dream.’ Nervous — but ready — Wes draws inspiration from his family, teachers, friend and mentor DJ Greg, plus all that he has learned from hip hop, to find the power of his pen.

“This book was written to emphasize the importance of family structure, mentorship, hip hop, and the positive impact of inspirational elementary school teachers,” Williams says.

Kardinal Offishall says “everyone who reads this book, young or young at heart, will benefit tremendously in so many ways,” and comedian and actor Gerry Dee adds that the book “is a must-read for any child who is developing their own passion and dreams.”

With its foreword written by Public Enemy’s Chuck D, and content long-credited for inspiring fellow Canadian hip hop star Drake, the original Stick to Your Vision book has been incorporated by multiple school curriculums as required reading and, together with his 2017 TED Talks on the subject of self-revision, have seen many guided on the right path by the multi-talented visionary.

It’s all a continuation of the legendary musician’s 30th anniversary of exploding onto the scene by way of 1989’s iconic Symphony in Effect. Its success blazed a fiery fresh trail, becoming the first hip hop release to receive a JUNO Award for Best Rap Recording of the Year, and first Canadian hip hop album to reach Platinum status.

With 14 JUNO nominations (plus a second win, this time for Best Video in ’91), real estate on the Scarborough Walk of Fame, anthems on repeat for both ’14 and ’16 Olympics, and eight seasons playing the role of Vice Principal Paul Dwyer on the CBC hit sitcom, Mr. D. — to say the least — Williams is easily considered one of Canada’s premier and most notable multi-media personalities.

“Maestro taught me how to be a student of the game while being a legend,” artist, producer, and CEO of Half Life Records Classified shares. “He always had excitement for creating new projects, and his first children’s book is an indication of his dedication.”

“An outstanding achievement from one of Canada’s most prolific artists,” actress and Founder/Executive Director of Reelworld Film Festival and Reelworld Screen Institute Tonya Williams adds. “You are drawn into the very real and raw experience of Young Maestro. This story is fun and filled with anecdotes that every child could relate to.”

“This is a powerful story that brought me back to my school days as a young black boy and the son of Trinidadian-born parents; I knew one day, even though facing adversity, I would play in the NBA,” Toronto Raptors Assistant Coach and President of the Jamaal Magloire Foundation Jamaal Magloire says. “The book reaffirms to not only kids — but also to parents and teachers — that positive influence, encouragement, hard work, and sacrifices can make your dream come true.”

Stick To Your Vision: Young Maestro Goes to School is available for pre-orders now.

Maestro’s songs “Reach For The Sky (feat. Classified and Blue Rodeo)” and “The Distance (feat. Saukrates)” were featured throughout the Olympics, 2014 Winter and 2016 Summer, respectively.

As an actor, Williams has appeared on numerous film and television projects, including The Line — for which he was nominated for a Gemini Award for Best Performance by an Actor in a Featured Supporting Role in a Dramatic Series — and  as the character of Paul Dwyer in the CBC hit sitcom, Mr. D.

He has been inducted into the Scarborough Walk of Fame, received the 2003 Reel World Film Festival Trailblazer Award, and was a guest speaker for the Governor General of Canada’s Summit on Urban Arts.

Williams’ paths as both an author and motivational speaker merged with the release of his motivational book, Stick To Your Vision. With its foreword written by Public Enemy’s Chuck D, and content long-credited for inspiring fellow Canadian hip hop star Drake, the book has been incorporated by multiple school curriculums as required reading. His 2017 TED Talks on the subject of Self - Revision has been inspiring to many who have watched him evolve for over three decades.

2019 commemorates the 30 year anniversary of his first album and it's a great time to celebrate as well as to motivate young minds. Recently, Wes performed and was a presenter at the 2019 JUNO Awards, performed at the final home game for the Vancouver Canucks’ 2019 NHL season, and supported the Kidney Foundation of BC.