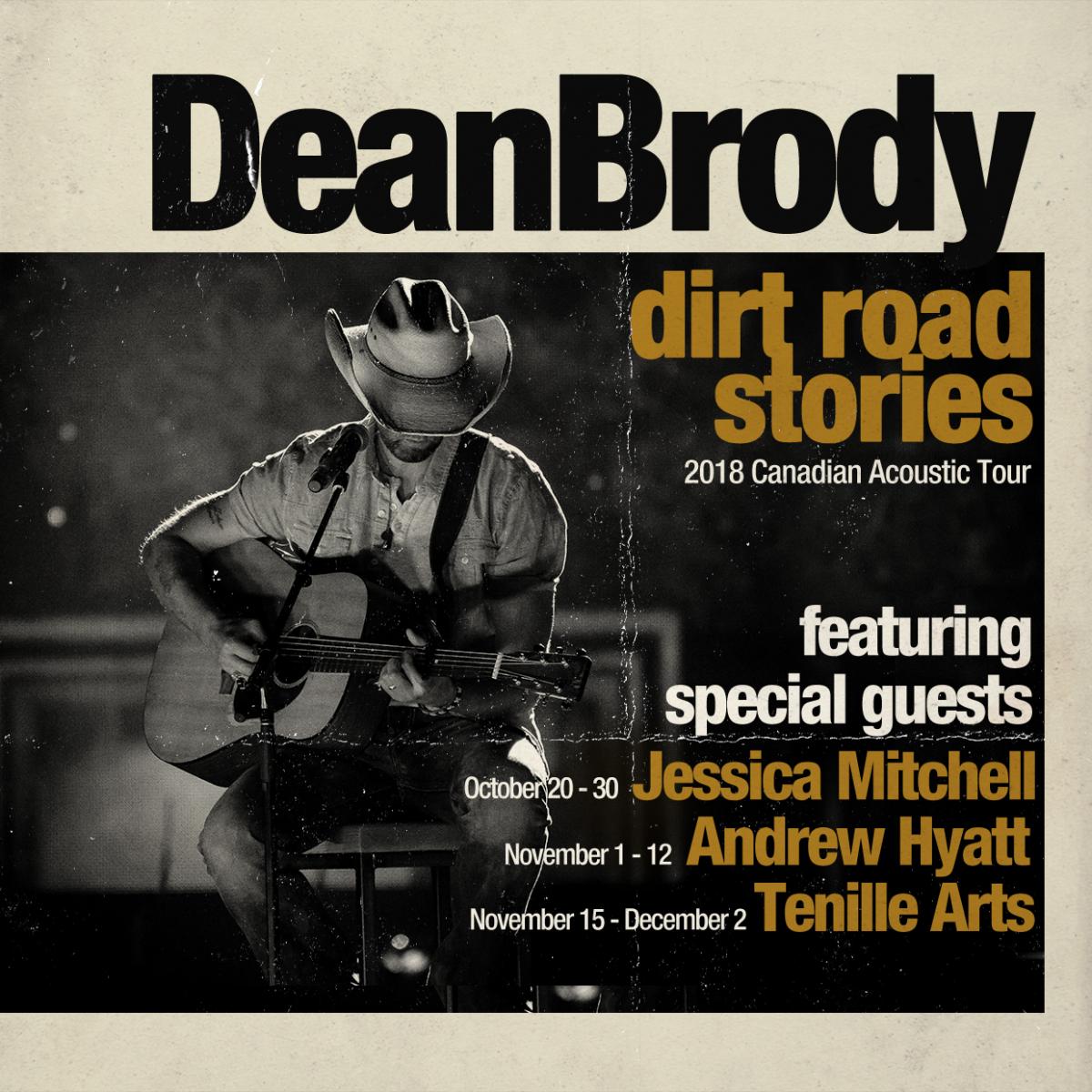 Current CCMA Fan’s Choice, 2-time Juno Award-winning artist and celebrated songwriter, Dean Brody will be hitting the road this fall for the Dirt Road Stories Tour, beginning October 20 in Truro and ending December 2 in Cranbrook, BC. Stopping in both small towns and larger markets, this compelling, intimate acoustic tour will showcase Brody’s depth as a songwriter, and his unparalleled ability to bring storytelling to the forefront of country music.

Fresh off of his second headline show at Budweiser Stage in Toronto on August 17, Brody is a 3-time winner of the CCMA Award for Songwriter of the Year in previous years, and is currently nominated for “8th Day”, from his sixth album, Beautiful Freakshow, which hit the #1 spot on the Nielsen BDS and Mediabase Canadian Country Airplay Charts earlier this year. Brody’s reputation for penning thoughtful, articulate, original narratives in music began back in 2009 with the release of “Brothers”, a touching song about a loved one leaving for the military, which resonated both north and south of the border. Celebrated songs such as “Trail in Life”, “Another Man’s Gold”, “Bounty”, have gone on to place Brody in a unique category all his own, rising beyond the conventional tracks that can be heard on mainstream radio in lyrical composition, and yet still retaining conventional success, with Brody recently landing his 22nd Top 10 hit at country radio, with “Good Goodbye.” His ballad “Time” released in 2016, laments on the passing of time, becoming especially poignant in a social media era with less one-on-one interaction with loved ones, earned critical acclaim and a great deal of recognition, showcasing Brody’s unique ability to make people think about their actions through his lyrics.

Many of Brody’s songs were in fact written at his kitchen table, and the acoustic tour is meant to replicate that intimate setting that inspires his original works, “I want to give my fans a window into how my songs were written, how they sound in their rawest form, performed in an intimate theatre setting,” states Brody.

The focus on compelling storytelling in country continues where the opening acts in each market are concerned. Acclaiming singer-songwriter Jessica Mitchell will join Brody on each of the East Coast dates, including Montreal, giving listeners a taste of her genre-bending sound with tracks on her recently released debut album, Heart of Glass. Country musician Andrew Hyatt, who recently released his second Top Ten hit, “Do It With You”, will join Brody on his dates in Ontario. SK native TenilleArts who was recently featured on The Bachelor will be involved in the dates in Manitoba, Saskatchewan and British Columbia, providing insight into the meaning behind the songs on her debut EP.