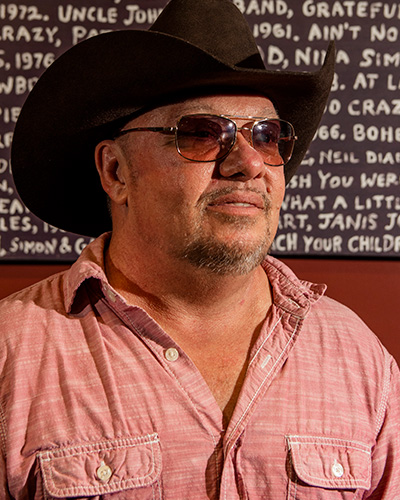 Glenn was born in a very small Illinois town in the late 60's.Two years later the family loaded up their 1950 Studebaker pickup which took him to God's land where the country raising began. Pryor, Oklahoma was the place he was brought up and lived the next chapter of his life. Glenn spent his childhood working for his dad in the body shop,  going to Church or wrestling. It was always one of those 3 things. Music entered into the scene during the Church days.

Graduating from high school in 1985, Glenn had 2 scholarship choices, singing, or wrestling. Glenn didn't want to be a sissy singer so he chose wrestling. The wrestling career lasted 1 year and 3 shoulder separations.

Not long after that, Glenn married and started life. He Joined the Army National Guard in July, 1988. Working full time left little room for outside pleasures. In November 15, 1990 he received the call! Time to pack up and go to war! Desert Storm was his destination.

While serving as a Fire Direction Sergeant in Iraq, Glenn had a lot of time to think. Upon returning home, he quit his job and went into business with his father. But the music was never far from his heart.