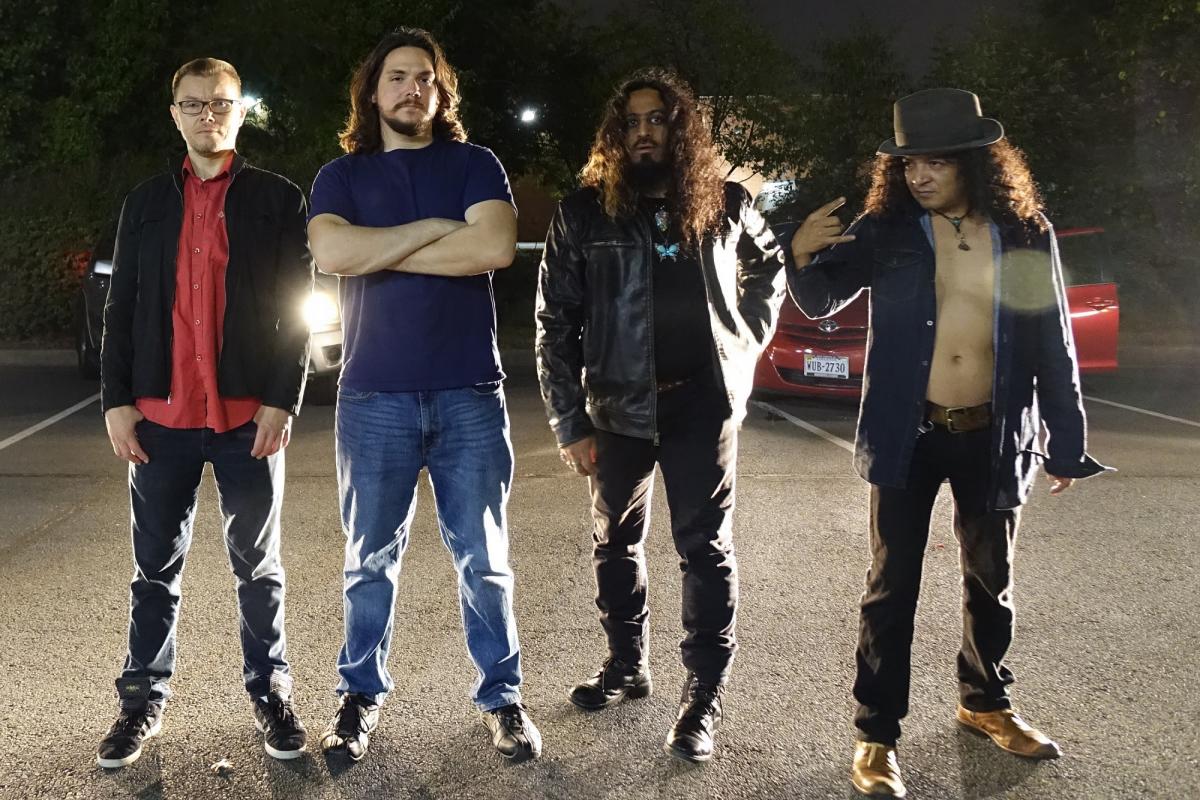 Straight outa the Washington, DC swamp, the hard-hitting Never Elected have a new single “Wake Up” that will be out on November 15th. Energetic and engaging, it’s pure rock with a catchy flair. The grunge power crew is Altan Aydin– Guitar, Dr. T – Bass, AbelPaiva – Drums and Sujit Kumar– Madness of a percussive and vocal nature.

“Wake Up” is the musical interlude that comes after “Down Too Long”, which was released in 2017 and precedes the new album Never Elected are working on which takes a heavier, grungier turn. The band explains the release of the single:

“This single is just an indication of what lies ahead on our next album. We dropped our tuning to D, figuring that it gives us exactly what we are looking for sound-wise. Our fans love to sing along to our songs and “Wake Up” was chosen to be the single based on what the fans loved most at our live shows.”

What started out in 2015, as an acoustic rock duo playing covers evolved into a full band that began turning heads in their hometown of Washington, with their high energy live performances, which includes their frontman climbing the walls, literally. Never Elected talks about the intricacies of the single:

“Catchy riffs are matched with a catchy vocal melody reaching out to convey a message. The pauses with absolute silence in between the choruses are deliberate to kind of show how we as a society in general, WAKE UP loudly to a certain problem, think about it, and once it’s all silent, we go back to sleep again until WOKEN UP to another issue only to repeat the same all over again.”

Citing main influences coming from the glory days of 90s grunge like Soundgarden, Foo Fighters and Alice in Chains, Never Elected is recommended for fans of the genre and anyone who likes hard rock with something to say.

Tombstones create walls of sound simultaneously sonorous and hazy. These are cavernous, stoner lullabies wrapped in dark shoegazing dreamscapes and descend into post-rock soundscapes. They also sound like Charles Bukowski’s backing band, if he ever had one.

'Maybe Someday' is the first long-play from Tombstones In Their Eyes since their debut release 'Sleep Forever' (2015). Haven’t been slacking though, having put out 2017\s 'Nothing New' EP, 'Shutting  Down' single and ‘Fear’ EP. They also released their huge sounding ‘Bad Clouds’ EP (2016).

"Maybe Someday is a magic song!  It came together quickly and I fell in love with the demo.  I was scared to re-record it in the studio, so we were very careful not to mess with the magic.  Maybe Someday says it all, as far as the theme of the song goes.  It's about yearning to break out of the self-imposed chains but knowing that it will probably never happen.  So sad, really," says John Treanor.

"It features some wonderful melody guitar playing by Josh in the breaks and Stephen even played a spring to make the beat sound more clock-like and hypnotic.  Mike plays a straight-ahead bass line to further accentuate the steady movement towards the payoff of the final chorus.  One of my favourite songs and I've listened to it hundreds of times."

'Maybe Someday' single and album are out now, available on limited edition CD through Somewherecold Records. Digitally, it will be available across platforms such as iTunes and Spotify, but can already be pre-ordered via Bandcamp.

Who knew there was a sweet spot between blues and punk? Chicago's The Jab claims to have found it and smeared it all over the upcoming album ‘Consume.’ out Feb.4, 2020.

Lead off single is ‘Riot’. The term "scuzzy" has been used to describe the slashed-speaker, distorted rock 'n' roll practiced by The Jab, but this ain't scuzzy at all. It's soulful, complex, and the sound of smouldering rock 'n' roll ambitions and swagger presented in an infectious package. Easy comparisons rattle around in one's rock 'n' roll mind: The attitudinal guitar playing of Billy Squier backing the over-the-top frontman-ness of Peter Wolf. Or Wolf leading the MC5. But none of those would really do this band justice. You just have to let them be who they are.

Frontman Jam Alker, a veteran of Chicago's club circuit and a punk blues enthusiast, says, "This is a social conscious alarm clock going off next to society's bed. It's a rock 'n' roll call to action in response to the restless discontent and disempowerment so many feel in our society, a response to inequality, addiction, consumerism, violence. 'Riot' is The JAB's mission statement."

Alker was showcasing his punk-blues aesthetic for major labels on the Chicago club circuit just a handful of years ago. With the world at his fingertips, he swapped his guitar for the needle and disappeared for nearly a decade. In 2014, the birth of his daughter finally flipped the life or death switch and he began treatment. An arduous journey of detox and song-writing therapy laid the foundation for his debut LP, Consume. Bandmates Tom Stukel, Terry Byrne, Ryan Herrick, and Alex Piazza—all seasoned, dynamic players —collaborate with Jam on his blue-collar thinking-man’s music, delivered with grit and transparency.

The result is the bluesy, post-classic rock, a modern sludge rock record that is Consume. With bite-sized versions of Led Zeppelin’s monstrously thick-grooved riffs, the sensibilities of a Black Keys album, and an often-deep southern melody, this is the darkest feel-good record in years.

All woman electro-posters Caveboy say they’re are excited to announce the release of debut album, Night in the Park, Kiss in the Dark, due out January 31, 2020. The album features previously released singles "Landslide", "I Wonder", "Hide Your Love", and "Silk for Gold". Album is available for pre-save and pre-order now! The Montreal trio, comprised of Michelle Bensimon(lead vocals, guitar, synth), Isabelle Banos (bass, synths, backing vocals) and Lana Cooney (drums, percussion, backing vocals), will celebrate with a special hometown show on February 8th at the Phi Centre, and have added new shows in Toronto at the Drake Underground (Jan 24 w/ special guest T. Thomason), Kingston's Mansion (Jan 25) and NYC's New Colossus Festival (March 11-15). Details at www.caveboymusic.com.

"We wrote close to 40 songs and searched high and low for the right producer. We felt like our previous material never managed to reach the sonic level we dreamt of because of our limited budget and experience. We’ve always been so precious about our music and have struggled to let outsiders into our creative process. It dawned on us that we would have to let our guard down to create something truly special. We finally found the collaborative partner we’d been dreaming of in Derek Hoffman (RALPH, The Trews, Arkells). We immediately referred to Derek as the fourth brain of Caveboy. He knew exactly what we wanted; he took what was in our heads and turned it into reality. Our dream team spent six months through the winter of 2018 and 2019 working through all our demos to create the 10-song world of our debut album Night in the Park, Kiss in the Dark. We couldn’t be more proud of it.” - Caveboy

Check for deep cuts “Lifetime’ and ‘Up In Flames.’

BITS’N’PIECES…..Montreal’s  Growler Choir performs “The Dayking”…..Could this be the first next big thing this year? Are ya ready for Extreme Acapella? Montreal’s Growler Choir (Le Choeur De Growler in French) was dreamt up by composer Pierre-Luc Senécal in 2016.  What may have been a wild fantasy for many metalheads was finally brought to fruition in May 2019 in co-production with Le Vivier et Codes d’Accès when the eighteen member choir took the stage for their first public performance…..Comprised solely of metal growlers, the choir blends metal and contemporary music in a way that is groundbreaking. In their debut performance conducted by Senécal, the Growler Choir performed the dramatic words from the poem “The Dayking” by Fortner Anderson backed with a reinforced sound arsenal. The Growler Choir does more than emphasize vocal techniques specific to the genre of extreme metal, they explore the sonic potential of the voice to demonstrate its extraordinary properties, both sensual and monstrous. The Growler Choir innovates on several levels. On one hand, it materializes an almost mythical idea of metal music; on the other hand, it renews the archetypes of a genre by approaching them in an experimental spirit. In short, they are making contemporary and metal music more approachable for new audiences.

Of special note is the listing of ‘conscious’ r’n’b artist Shi Wisdom, raising the intriguing prospect of performances from unconscious artists…..All net proceeds this year will go to The Unison Benevolent Fund, which helps music-industry folks in need of financial and other assistance. For more information on the festival and for updates, please visit https://www.speakmusicbekindfest.com/….The Recollectiv (Alzheimer’s Group) – a musical group primarily comprised of people in Toronto affected by cognitive challenges. Recollectiv’s mission is to help them gain a new social network, rediscover a sense of accomplishment and find joy through music-making, will be in attendance. Friday, Jan. 17 | Doors 6:30 pm | Music 7:00 pm – 1:00 am, Saturday, Jan. 18 | Doors 12:30 pm | Music 1:00 pm – 1:00 am, Sunday, Jan. 19 | Doors 12:30 pm | Music 1:00 pm – 11:30 pm…..Long Winter is pleased to announce the third event of its 2019-2020 series that will take place at the Gladstone Hotel on January 11. This special edition of Long Winter celebrates the 1 year anniversary of Tea Base, a politicized DIY community art space tucked away in the basement of Chinatown Centre!