Skip to main content
In Memory Of Jay Frank 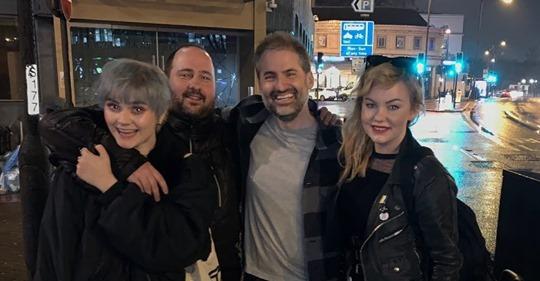 Down there they had some regular tech companies. The usual startups that you never know if they will survive the next week. But there was also Aileen Crowley. She had a new company called Digsin (short for Digital Single). Their business model was to give away MP3’s for free like a subscription model. The exchange was to build a fan base with all these people that signed up. It was kind of a crazy idea. I’m a fan of crazy ideas and it resonated a string inside me that this was beyond the normal company. I invited them to go to the show just to see the band and see if we could collaborate something together.

That show was really a disaster. Still, it’s one of the most important shows ever for me. It was only visited by six, seven people. All these people became important to me later in my career. And one of those people was Jay Frank, the owner of Digsin. I didn’t know that as he wasn’t introduced to me down in the basement. But I was smart enough to say hello to all the people that came and got his card. And even though the show was crap, Jay saw the potential and we had a conversation about how to work with Digsin.

I could talk for hours with Jay around how the industry was changing. Exchanging information and our visions. And I started working with Digsin. They signed both Like Swimming and The Magnettes. It gave me really rare opportunities on tour to continue my talks with Jay. We became close.  We have invaded Jay and Linda’s house, forcing them to have a Halloween party and have the band playing. We crashed at Jay’s parent’s house on one tour and even went on Zombie gigs outside NYC.

One really memorable night out was in Barcelona. The band was tired and went to bed around midnight. Jay and I keep going on. Seven in the morning waking the band up in our apartment,  Jay and I got to singing in full volume “Heeeey Macarena” after spending the whole night in a 90’s music club dancing. Actually, the photo of The Magnettes first single was taken at the same time in that apartment.

I can just ramble on with different strange and cool memories that I have shared with Jay. Or how many people I have met through him that have meant so much in my career. We are many that have a lot to thank Jay Frank, for a lot. You just can see how the internet just filled up with people owning their careers and good memories with Jay when the news of his death came out. He was one of kind and I’m so blessed that I have met him and had a chance to spend so much time around with him.

The photo is when Jay manages to get to The Magnettes show in London this past Spring. The last time I met Jay in person. And in Jay fashion, we got to a restaurant, eating and having discussions until they throw us out, this photo is just after that.

Thank you, Jay, for all, you went away far too early. I will miss you so much. And yes, I will do the thing we talked about the last time on the phone this past summer. I’m sorry that I can’t take you on the journey I know you would have liked it. Still, thank you for the advice to just do it. I just took the one important step yesterday with that in mind.

"I know this is not goodbye."