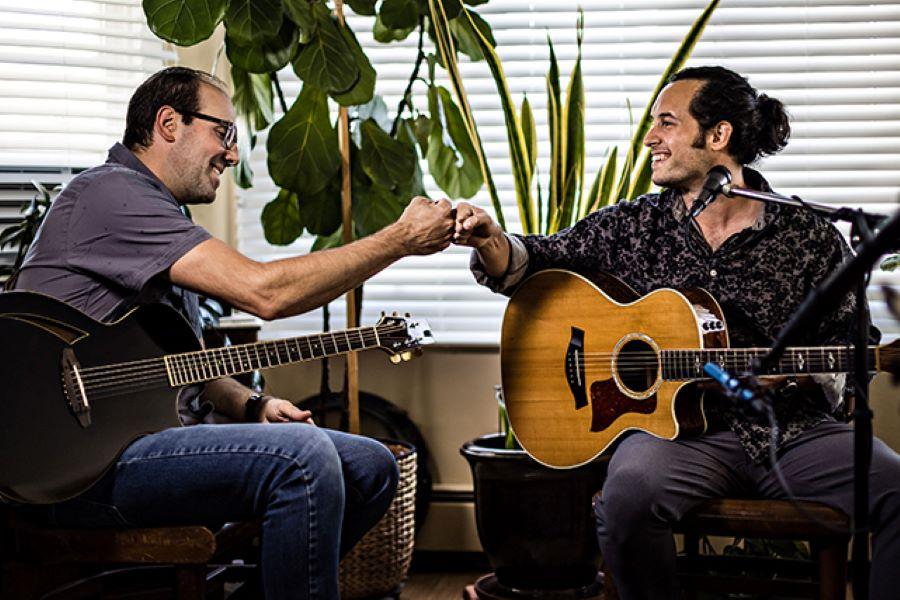 Two acoustic guitars (one plugged in, one not), some smooth but earnest vocals, and one cozy living room is all Mike Green, and his longtime friend, Tim Palmieri (Lotus, Kung Fu), needed to create the new single, “No One’s Gonna Love You Like I Do”.

Watch “No One’s Gonna Love You Like I Do” here:

The first single from their Living Room Session EP, the song tells the story of a guy who knows he’s not the girl’s type, but he’s going to pursue her anyway and give it all he’s got. The rhythm is steady and, at times, passionately emphatic — and Palmieri adds some deft fingerpicking and beautiful wailing notes. The bridge alternates between exuberance and lament, and the song ends on the slow and full-hearted declaration, “Somehow…we’ll figure it all out…no one’s gonna love you like I do.”

Mike Green and Tim Palmieri grew up together in Connecticut on a street named Cosey Beach Avenue, and Palmieri had always been a guitar hero of Green’s. “We’ve known each other so long we’re essentially brothers,” Green said. They had collaborated together on a few occasions, but usually they were both seeing family and couldn’t find the time to play seriously together and record.

Recently, however, this time was different.

“This felt emotional because it was filmed in my childhood home, with my family who I was visiting, on the other side of the camera, watching from across the room,” Green said. “Anyone in this room at the time of this recording is someone I have not seen in almost two years due to the pandemic. It’s been just as long since I’ve had someone performing by my side.”

Ironically, the first time Palmieri ever heard Green perform was in that same room — with an eight-year-old Green singing “Rocky Racoon.” “We have both grown so much individually as performers, musicians and travelers, to come full circle and be reunited for this performance really aligned us with our roots again,” Green said.

It was great to be together again with family and friends, having some wonderful laughs along with wine and cheese. The only obstacle, though, was Palmieri’s guitar, which was a semi-hollow body acoustic that didn’t project enough for the room mic. They didn’t have time to borrow another guitar, but they realized Palmieri could plug in, so Green found an old, beat-up amp he had in the attic that didn’t even have a power button and that had to be pressed in with a pen or a cable. It crackled a bit, and then, hallelujah, it worked.

They recorded each song back to back in one take, without rehearsing first. “I wanted to keep these songs simple and stripped down,” Green said. “There aren’t any effects or glamour. Two guitars, two hearts.” “No One’s Gonna Love You Like I Do” originally appeared on Green’s self-produced debut album Restart, and the original was a bit cheerier. “It was fun to try out a more chill version of it,” Green said.

Green is a Berklee College of Music grad, and is now a sought-after L.A. session player and singer, and has performed in front of renowned artists such as Mick Jagger, John C. Reilly, Wyclef Jean, Maroon 5, and Jamie Cullum.