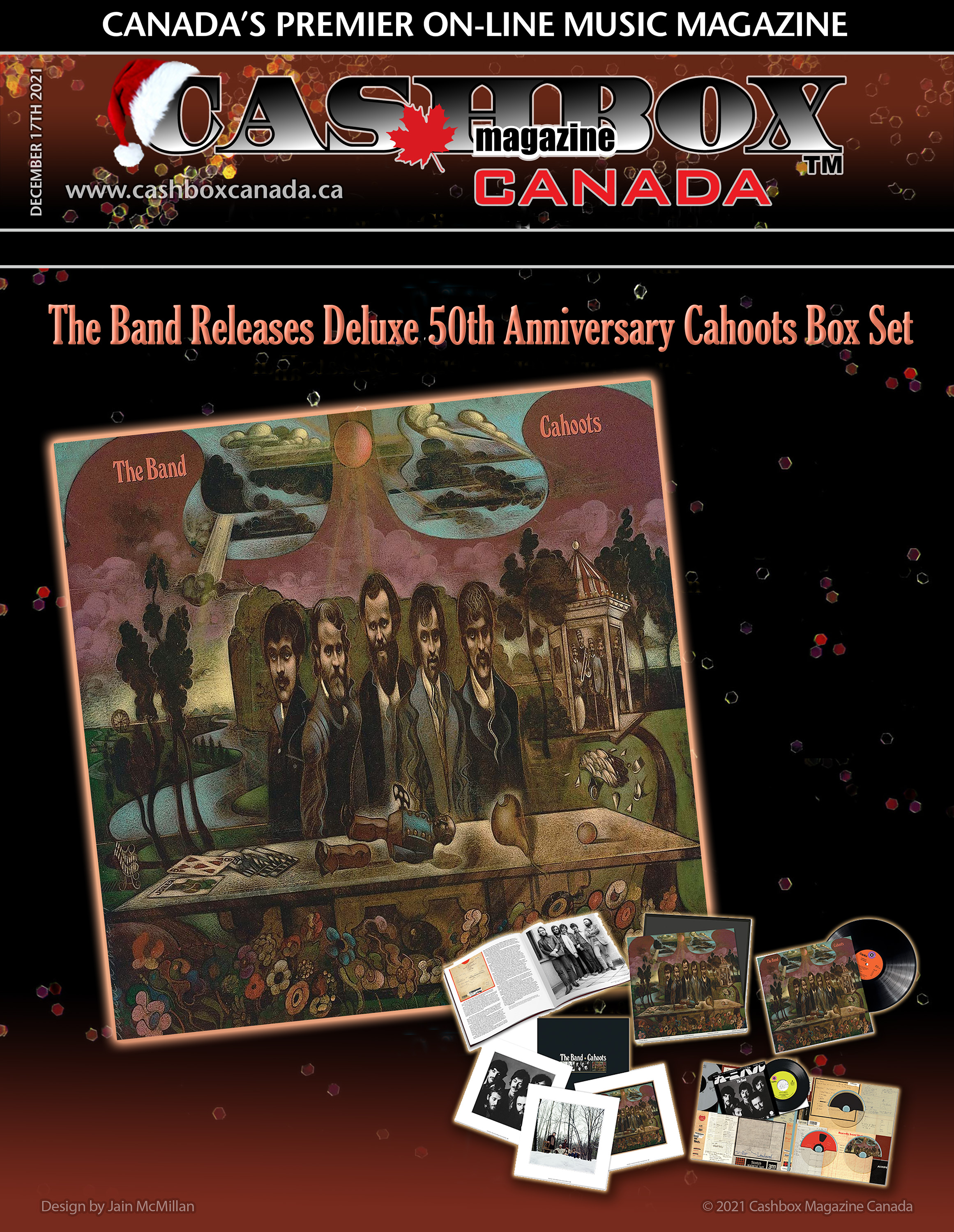 When The Band pulled into the unfinished Bearsville Sounds Studios in Bearsville, New York in early 1971 to record Cahoots, their fourth studio album in as many years, they were still basking in the success of and acclaim for their first three history-making records. The Band’s landmark debut album, July 1968’s Music From Big Pink, drew inspiration from the American roots music melting pot of country, blues, R&B, gospel, soul, rockabilly, the honking tenor sax tradition, hymns, funeral dirges, brass band music, folk and good ol’ rock ’n’ roll to foment a timeless new style that forever changed the course of popular music. When they released their seminal eponymous second album, The Band, the following year in September 1969 – or “The Brown Album,” as it would lovingly be called – not much more was known about the reclusive group. Even so, August 1970’s Stage Fright, recorded over 12 days on the stage of the Woodstock Playhouse in upstate New York, cemented the fulfilled promise of those initial back-to-back albums that solidified The Band as one of the most exciting and revolutionary groups of the late 1960s, who were able to carry their avowed excellence directly into the 1970s without interruption.

Indeed, The Band, made up of four Canadians and one American, was still purposefully shrouded in mystery at the turn of the decade, allowing for listeners and the music press to let their imaginations run afield about who these men were and what this music was that sounded unlike anything else happening as the psychedelic ‘60s officially wound down. Dressed like 19th century fire-and-brimstone preachers and singing rustic, sepia-toned songs about America and the deep south, The Band – Garth Hudson (keyboards, accordion, horns), Levon Helm (drums, vocals, mandolin, guitar), Richard Manuel (keyboards, vocals, drums), Rick Danko (bass, vocals) and Robbie Robertson (guitar, piano, vocals) – was still somewhat enigmatic as the ‘70s began to unfold and unravel around them, but there’s no denying how The Band was able to forge such an ineradicable impact on the music scene at large heretofore unmatched by any group that came before them, or since.

Capitol/UMe now celebrates  the 50th anniversary of The Band’s classic fourth album, Cahoots, with an assembly of newly remixed, remastered and expanded 50th Anniversary Edition packages, including a multi-format Super Deluxe 2CD/Blu-ray/1LP/7-inch vinyl box set along with digital, 2CD, 180-gram half-speed-mastered black vinyl and limited-edition 180-gram black vinyl packages. All the Anniversary Edition releases were overseen by principal songwriter Robbie Robertson and sport a new stereo mix by Bob Clearmountain from the original multi-track masters. The box set, CD and digital configurations boast a bevy of unreleased recordings, including Live at the Olympia Theatre, Paris, May 1971, a rousing bootleg partial concert consisting of 11 tracks culled from the initial throes of a European tour that found The Band perched at the top of their live game; and early and alternate versions of “Endless Highway” and “When I Paint My Masterpiece” along with six other early takes, outtakes, instrumentals, and stripped-down mixes.

Exclusively for this box set, Clearmountain has also created new Dolby Atmos and 5.1 surround-sound mixes of both the album and four bonus tracks, presented in high resolution on Blu-ray, alongside the new stereo mix. Every new audio mix has been mastered by Adam Ayan at Gateway Mastering. The lift-top box set also includes an exclusive reproduction of the Japanese pressing of The Band’s 1971 7-inch vinyl single for “Life Is A Carnival” b/w “The Moon Struck One” in their new stereo mixes; a 20-page booklet with new notes by Robbie Robertson and extensive insider liner notes by Rob Bowman; three classic photo lithographs, one each by Barry Feinstein, Richard Avedon (his infamous eyes-closed group portrait from the back cover) and noted New York artist/illustrator Gilbert Stone (who painted the still stunning stretched-out portrait of The Band on the album’s front cover); plus a wealth of additional material and other historical data from the original recordings sessions. The limited-edition 180-gram black vinyl release that features a tip-on jacket also contains a photo lithograph by Barrie Wentzell that’s unique to the package.

As with the acclaimed 50th anniversary collections for the winning trio of Music From Big Pink, the self-titled record and Stage Fright, Clearmountain and Robertson’s approach to remixing Cahoots was undertaken with the utmost care and respect for the music and what The Band represents. That said, Robertson’s instructions for how his right-hand mixing partner should handle the Cahoots mixes possessed one key difference: Robertson wanted Clearmountain to transform them based on what he felt was lacking from the original mixes. As Clearmountain shares in the liners, “Robbie told me, ‘Just think of the original mixes as rough mixes. Pretty much don’t pay attention to the mixes themselves.’” This directive gave Clearmountain the leeway to unclutter some of the album’s original arrangements, all with Robertson’s blessing: “In the beginning of these sessions, we didn’t know if we were making another Basement Tapes where nobody would hear the music or if we were actually making a real record,” Robertson admits. Though Robertson felt the first three Band records wound up sounding better due to a combination of how today’s technology actually enhances the limitations of yesterday’s technology, he doubled down with his instructions to Clearmountain for Cahoots: “I told Bob, ‘There are no rules. So, every mix we do, I want to start from scratch. I don’t even want to listen to the original. I want to listen to the way we hear it now and be fearless and experimental with it.”

Clearly, Clearmountain took Robertson’s wishes to heart not only in terms of his 2021 stereo mix – as is instantly evident in the greater clarity of the punch of the drums and bass and how putting guitar and organ lines a bit back in the mix enables certain vocal elements to be more out front – but most especially in terms of the breadth so readily apparent in his groundbreaking Dolby Atmos mix, a first for The Band’s core catalog. In his Atmos mix of Cahoots, Clearmountain puts the listener dead-center and smack dab in the middle of the band in the most “you-are-there” fashion imaginable. Concludes Robertson, “This is what I really meant. This is the honesty of this now. This is a trip. This is something special.”

In May and June of 1971, The Band set off to tour Europe, where they hadn’t played since their tumultuous tour with Bob Dylan in 1966, during which they were booed every night as folk rock purists felt betrayed by Dylan’s going electric as backed by The Hawks, who would soon enough become The Band. Not having played the continent in five years, the guys were justifiably wary and didn’t really know what to expect in Europe – but rather than garnering boos and catcalls, they received a rapturous response at their first concert in Hamburg, Germany and would continue performing for one enthusiastic crowd after another. Playing at the Olympia Theatre in Paris on May 25, 1971 was one such gig especially near and dear to The Band’s collective heart. “We hadn’t been back to this place since playing there with Bob Dylan, when the Paris show was a complete disaster,” Robertson recalls. “We wanted so much to do a special performance for the French. We wanted a certain kind of feeling in the Olympia. When we played the show, I felt like we did it.”

The set list that night reflected each of The Band’s ten two-set European concerts, and it was recorded by a French radio station and filmed by French media. Sadly, only the second half of that show survives, but it’s full of a slew of Band classics, such as “The W.S. Walcott Medicine Show,” “We Can Talk,” the Stevie Wonder-penned Four Tops hit “Loving You Is Sweeter Than Ever,” “The Night They Drove Old Dixie Down,” “Across The Great Divide,” “The Unfaithful Servant,” “Don’t Do It,” the Garth Hudson showcase “The Genetic Method” that leads into “Chest Fever,” “Rag Mama Rag” and a rousing cover of the Little Richard barnburner, “Slippin’ And Slidin’.” This portion of the Paris show is presented on CD2 as a “bootleg partial concert,” but even so, each of these 11 electrifying live tracks serve as even more evidence of just how good The Band sounded onstage at this point in their career.

Originally released on September 15, 1971, Cahoots contains a number of The Band’s best-loved and most enduring songs, including “Life Is A Carnival” and “When I Paint My Masterpiece.” As recounted in the liner notes, longtime Band road manager Jonathan Taplin notes how “Carnival” was born in part out of Robertson’s infatuation with some of the more peculiar characters on display in Marcel Carné’s 1945 film Les Enfants du Paradise, not to mention his having worked on the midway at the Canadian National Exhibition in Toronto in his youth. In addition to The Band’s own impeccable style of groove-making, the song’s Mardi Gras-esque atmospherics are also due to legendary New Orleans R&B producer Allen Toussaint having been deployed to compose a most excellent, and decidedly funky, horn arrangement to buttress the track.

Meanwhile, “When I Paint My Masterpiece” ensued from a visit by lifelong Band compadre Bob Dylan, an instant classic that’s bolstered by Levon Helm’s mandolin and Garth Hudson’s accordion, both of which lent the track a European feel that best matched Dylan’s lyrical axis. Be sure to spend time with the “Masterpiece” alternate take near the end of CD1, which begins with a more prominent mandolin chord and world-weary Levon vocal, rather than the song’s more familiar 25-second fade-in. You’ll also discern differences in Garth’s accordion accompaniment, Rick Danko’s animated bass playing and Richard Manuel’s insistent drumming. (Manuel often took to the drum chair whenever Levon would switch off to mandolin.)

Incidentally, Cahoots features another guest of note who also happened to be a Woodstock resident at the time: namely, Van Morrison, who adds his indelible vocal stamp to “4% Pantomime.” One afternoon, Morrison stopped by Robertson’s writing studio, heard Robertson noodling on some chord changes and a melody on piano, and the next thing anyone knew, Morrison was singing and creating lyrics on the spot while looking right at Richard Manuel. Morrison (whom Robertson dubbed the “Belfast Cowboy”) was so galvanized by the tune that he suggested they all head to the studio to cut it that same night. A few hours and a few false starts later, “4% Pantomime” was officially on tape. In the finished version, Morrison and Richard Manuel trade impassioned face-to-face vocals captured only a few feet apart (with Manuel also turning in double duty on piano), Levon Helm supplying the unmistakable backbeat, and Garth Hudson adding all the right organ fills. (You can hear that initial false start version on one of the key outtakes on CD1.)

Cahoots peaked at #21 on Billboard, marking The Band’s fourth consecutive Top 30 album appearance. Fifty years on, Cahoots remains a stone-cold masterpiece, reinforced with a vibrant swath of refreshing stereo and surround-sound mixes alike for lifelong fans and those discovering the wonders of The Band for the very first time. Believe it or not, Cahoots is most definitely worth more than “two bits a shot.”

For more on The Band visit:
officialtheband.com/