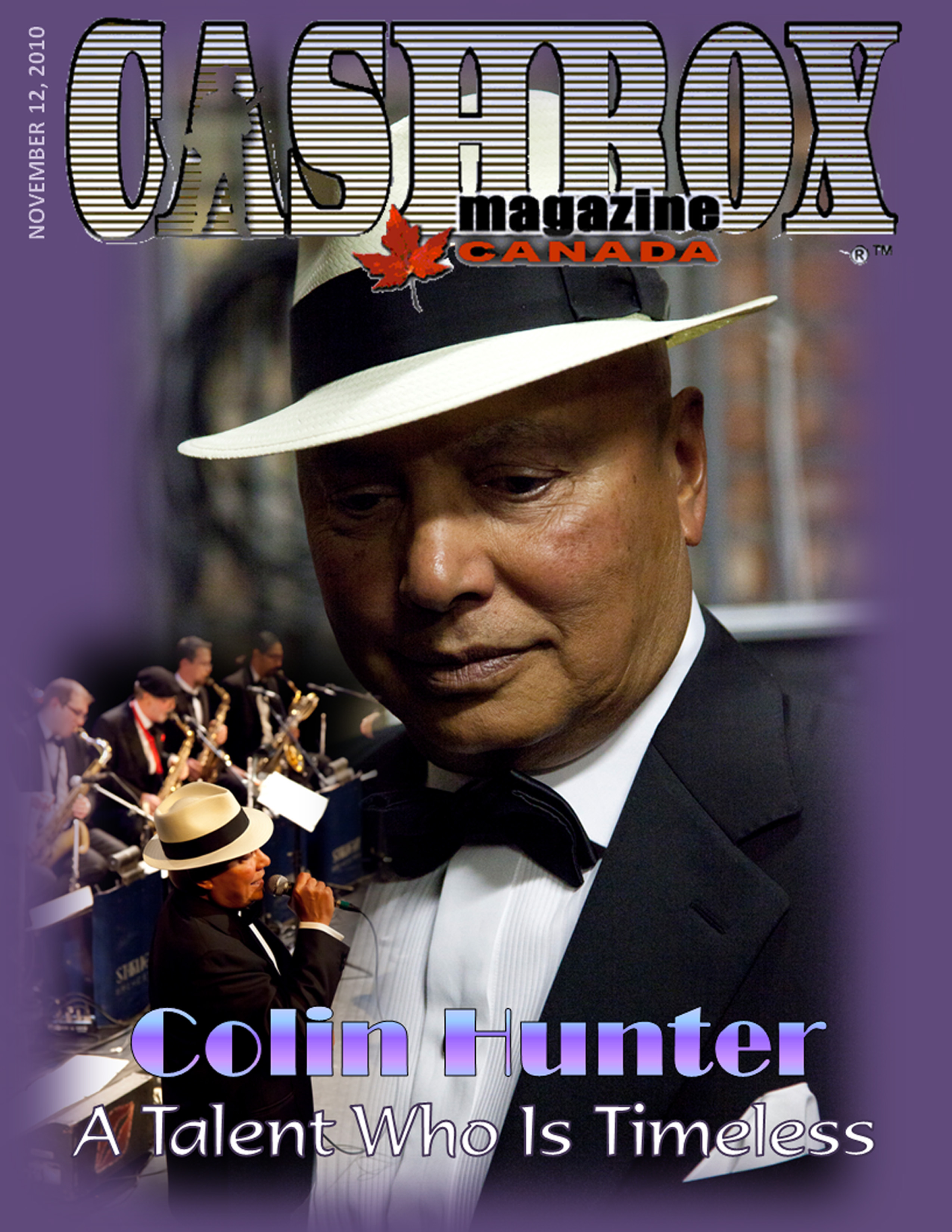 Timeless might be the title of the CD, but it is what truly describes Colin Hunter. His effortless way of performing, soft spoken way of telling you of his passion for singing and thoughtful way of looking at his life. Born in Bombay, India, when Cashbox asked how he ended up in Canada, Hunter explains, “I went to the UK for my parents because my Dad had a heart attack and the family needed another wage earner.

“ I immigrated to Canada firstly because my brother had preceded me and liked it, secondly because there was a absolutely stunning lady residing in the apartment building he lived in (I later married and am still married to her). Lastly, I had reached a senior level at British Airways and did not see any future advancement that would or could stimulate my dreams. My parents stayed in the UK.  It really sounds like a song title!”

“Additionally, an interesting fact is I landed in Toronto on July 26 1970 and 35 years later on July 26 2005 I recorded my first CD "Come Fly With Me" to coincide with the launch of Sunwing Airlines in Nov 2005” Hunter says in his own subtle way.

Hunter spent decades building a career in travel and tourism, with a list of successful businesses springing from his entrepreneurial spirit; Adventure Tours (which became Travel Holidays) Canada 3000 and Sunwing, resulting in he and son Stephen receiving the Ernst & Young Entrepreneur of the Year Award in the Hospitality and Tourism category in 2007. Now Colin Hunter has set out on yet another adventure, the music industry and his singing career.\Hunter kicked off his return to the music biz Friday October 29, 2010, performing a well-attended concert at the prestigious and historic Winter Garden Theatre (Toronto, Canada).

The lights came up on a lithe looking tuxedo-clad crooner, who took us back to a time when romance and music lived as one. Colin Hunter is a classy and indefatigable performer, with that touch of grace which makes what he’s doing seem effortless. No easy task as Hunter harkens back to a more demanding time when singers were expected to be complete entertainers and backing bands were technically flawless. Live, he captures the magic and the memories of the Crooners era to a ‘T’.

The sprawling show had two distinct segments separated by an intermission. The opening set put Hunter in front of The Joe Sealy Quintet, Sealy at the ivories backed up Paul Novotny on bass, Daniel Barnes on drums, Kelly Jefferson on tenor sax, Steve McDade on trumpet.

The polished one hour programme included a smooth rendition of the classic Dean Martin hit (from the film version of the Broadway musical ‘Bells Are Ringing) ‘Just In Time’, Nat King Cole’s ‘The Very Thought of You’. ‘Our Love is Here To Stay’ a song taken out of the many hits penned by Gershwin, and also ‘Autumn Leaves’ to name a few. The swing class jazz quintet made you feel like you were in some jazz club in the 1930’s; the only thing missing was dancers coming on to the dance floor which was all in your imagination.

After a very short intermission, Hunter was back on stage with the full big band in total period regalia, orchestra leader and arranger extraordinaire Anthony Terpstra guiding The Starlight Orchestra. As with the quintet, the big band looked like it was really enjoying playing this music and not just performing yet another jazz gig.

As musician after musician took solos, they nodded and smiled, getting in the groove of the evening. Hunter did the same, sharing his applause generously with his band, and its leader. The added touch of female background singers, Mary Panacci, Donna O’Connor and Kathleen Eyman, appearing as The Sparklettes, gave way to the great classics like Dino’s ‘(That’s) Amore’, and Hunter’s version of Peggy Lee’s ‘Gotta Have Heart’ showed how versatile this singer can be. It was great to hear ‘Basin Street Blues’ performed in a manner that would have done Ella and Satchmo proud.

Among the other great crooner classics covered were ‘Come Fly With Me’ and ‘Fly Me to The Moon’, clever and cheeky allusions to Hunter’s aviation history. He was at it again after a great version of Johnny Ray’s ‘Walking My Baby Back Home’ where tongue-in-cheek, Hunter told the audience that when this song was famous, men would walk their girls home after a date. “Now”, he says smiling to the audience, “ they drive them home in a car or (with that split second delivery) or an airplane.”

This incredible show worked its stardust magic for a full two hours, revisiting golden era standards such as  ‘Quando Quando’ ‘It Had To Be You’ ‘The Way You Look Tonite’ and the now forever to be known as Michael Jackson’s funeral song, ‘Smile’, written by none other than Charlie Chaplin.

With 5 CD recordings to his name, ‘Come Fly With Me’, ‘All About You’, ‘More About You’, ’Timeless’. ‘Timeless… Too’, Hunter has a new deal with the established Montreal record distribution company, Select, and all his product is in the process of re-release and will be available shortly in major outlets.

With plans to continue touring, Hunter will be appearing at The Cuban Jazz Festival on December 16th, will make more appearances in Montreal (‘one of my favourite places to play, wonderful audiences’) and announcing new dates in the very near future.

When Cashbox asked Colin Hunter what advice he would give to the up and coming artists or entrepreneurs out there, he reflected “ Follow your dreams. Unless you follow your dreams you will never be a happy person. Life is too short not to do what makes you happy. Have faith in yourself”.

Great words from a man who could just relax now in his life, after a string of business successes, but Colin Hunter is doing just that – following his dream and his new dream is to sing. If you see Colin Hunter scheduled to appear anywhere near you in the future, get tickets, go to the show.

You won’t be sorry. If not get online and visit his website for more music and further information at www.colinhunter.ca.