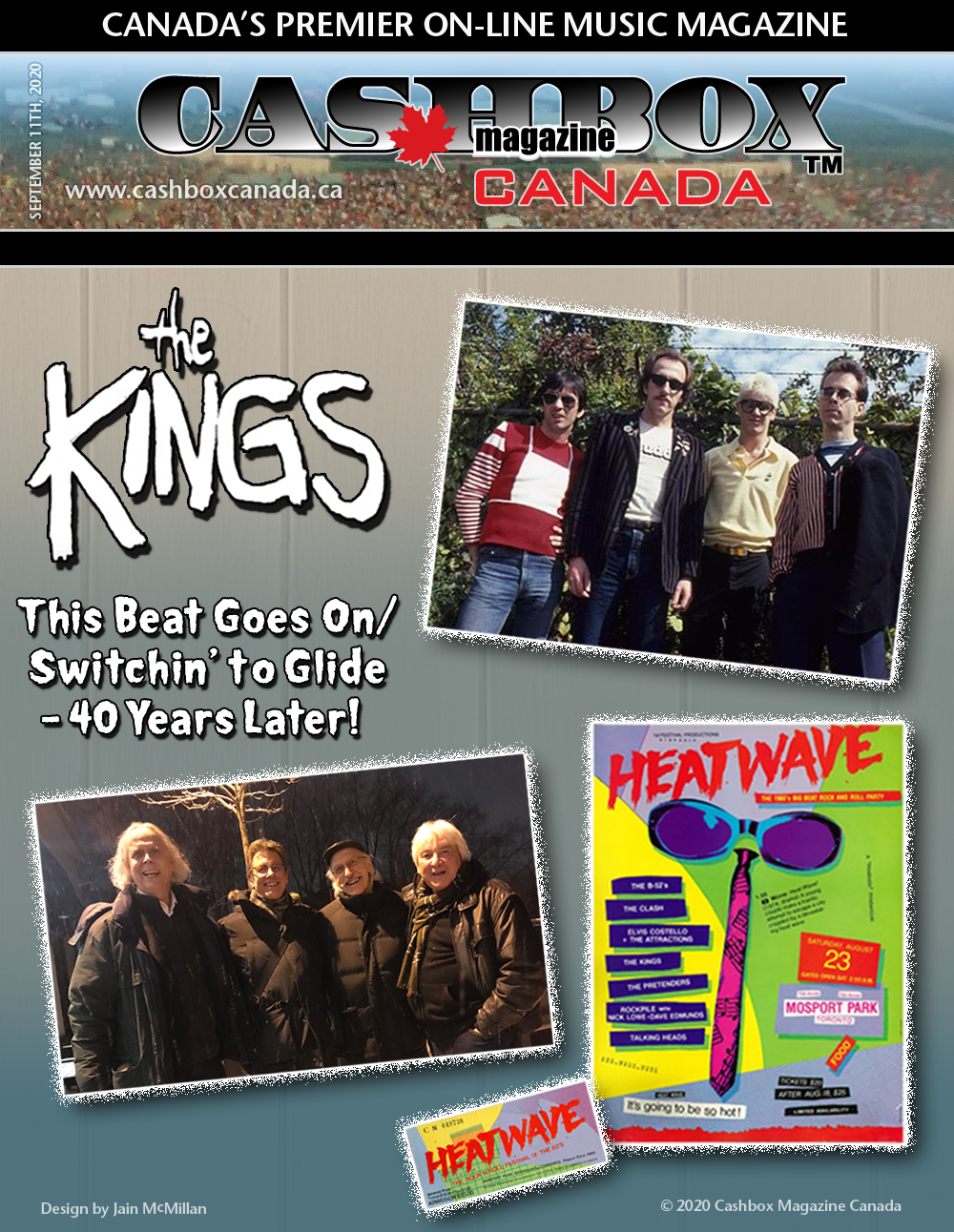 So the full circle of being named “The Most Promising Group by Cashbox Magazine (USA) to now being on the cover of Cashbox Canada, again la plus ça change, plus c'est la même chose.

We caught up with the boys at their hometown of Oakville, Ontario, and they talked about how serendipitous the whole ‘finding of the footage” began.

“It truly was a stroke of luck for us because back in the day, nobody had phones with cameras/videos, nobody hauled around those enormous video cameras so when we were approached to allow the film crew to actually film us at Heatwave we said of course, yes! All the other bands said no, with the exception of Teenage Head, ” explained “Mr. Zero” (John). “So the day of the concert John Brower (promoter) and Doug McClement had a full film crew and truck on site. We were eager for any kind of exposure so this was a great opportunity. Who knew it would resurface for us 40 years later? It truly was exceptional to know this history was preserved.”

“So The Kings and Teenage Head were the only bands that gave permission to be filmed,” recalls founding member Dave Diamond. “As Teenage Head’s audio has disappeared, this is the only surviving, authentic, and original sync footage from that day.”

So the story goes that The Kings tracked down the location of where these tapes were actually stored.

“As the studio had closed the original film seemed to have disappeared, but then it resurfaced when we tried to find it. We contacted Lauron Film and they had it!! They also said they had just been purging all the old tapes and we caught in just in time before it joined other tapes in the can in the dumpster.”

“It was digitally restored frame by frame from its 16mm-colour negative, and combined with authentic, re-mastered sound,” adds fellow founder Mister Zero. Sonny Keyes also chimes in: “The sound was recorded onsite by Comfort Sound’s Doug McClement on 8 track half inch analog tape and sounds amazing!”

As the tape was soundless, The Kings spent countless hours adding in the actual music to synch with the footage. “It was very exciting to see the footage again – synching it up to audio was tremendous amount of work but the results were well worth it. And the band got to have ownership of this priceless footage.”

How did a Canadian band end up signed to Elektra and produced by the legendary Bob Ezrin?

“Bob Ezrin was an early disciple of Canada’s own Jack Richardson. While we were there recording, Bob dropped by to visit and liked what he heard,” Diamond continues. “He agreed to mix the tracks we had done, but soon discovered that the whole thing needed to be re-done. He approached Elektra Records in Los Angeles with our tapes, and we were then signed to a worldwide deal. We later found out he had been scouting for a Canadian act and we peaked his interest.”

A little known fact is the band was actually called Whistleking until they won a Chum Radio Homegrown Contest and the name got shortened by fans to The Kings.

August 2020 marked not one, not two, but three crown-worthy milestones in the land of Canada’s long-iconic band, The Kings:

The single “This Beat Goes On/Switchin’ To Glide” continues to hold four decades of knockout radio success, has stacked around ~ 2 Million streams on Spotify and counting, was named by the Toronto Star as the “#1 almost official song of Toronto,” and one of the “Top 100 U.S. Radio Programmers Picks of the Decade” by Album Network Magazine.

The Kings have continued to rock fans around the world through the release of archived footage and current releases and vlogs; their YouTube channel has a total stream stack of more than 4.5+ million fans.

With The Kings ‘this beat” truly does go on.

For more on this iconic band visit:
thekingsarehere.com/
facebook.com/The-Kings-Are-Here-129367440437699/
Spotify - The Kings Are Here
Spotify - "This Beat Goes On/Switchin' to Glide"
YouTube - The Kings Documentary : "Anatomy of a One-Hit Wonder"