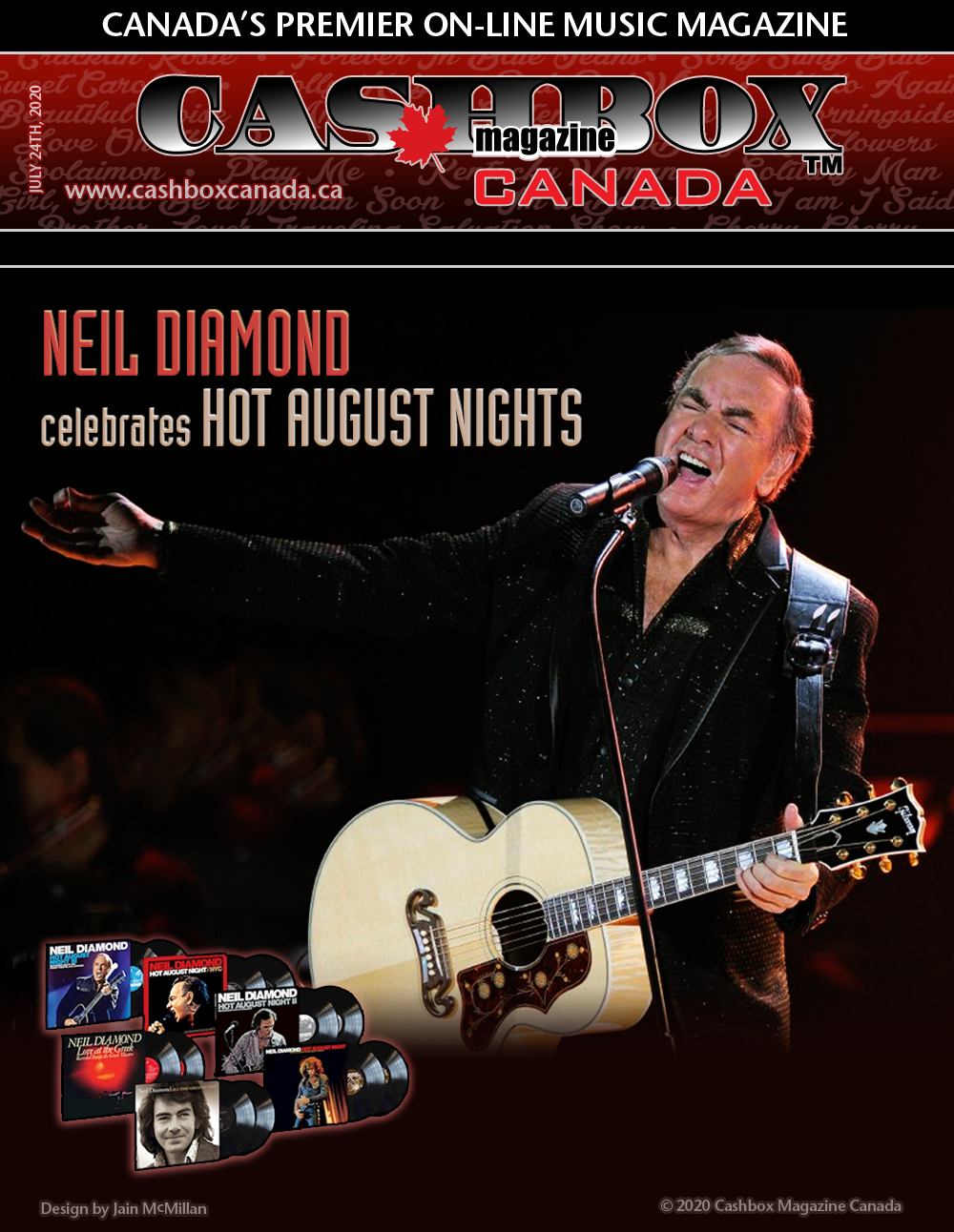 Hot August Night -The legend of Neil Diamond was unquestionably born on August 24, 1972, when the young singer/songwriter took over Los Angeles' Greek Theatre for ten sold-out nights. Diamond and his band were at the peak of their game that summer, a night that would be captured forever on the two-record set Hot August Night. On one of these nights, Robert Hilburn of The Los Angeles Times declared, "His 1972 Hot August Night stand at the Greek remains among the most celebrated series of shows by a mainstream pop-rock performer ever in Los Angeles."

As one of Diamond's most successful releases worldwide, the album was multi-platinum in the U.S. and spent a mind-blowing 29 weeks on the top of the Australian charts. Hot August Night is one of the most celebrated and acknowledged albums of Diamond's career and arguably one of the greatest live albums ever recorded. The original Hot August Night (the title of which was gleaned from the opening line to one of Diamond's most celebrated tracks, 1969's "Brother Love's Travelling Salvation Show,) will be available as a black 2LP or crystal-clear limited-edition 2LP. Listen to Hot August Night, HERE.

Love At The Greek (the 1977 live double album) was Diamond's second album recorded at famed Hollywood venue and the second album produced by Robbie Robertson. Love At The Greek (which features standout tracks such as "Holly Holly" and a fifteen-minute version of "Jonathan Livingston Seagull") will be available on vinyl for the first time in 30 years as a black 2LP or a translucent non-metallic gold limited-edition 2LP. Listen to Love At The Greek, HERE. 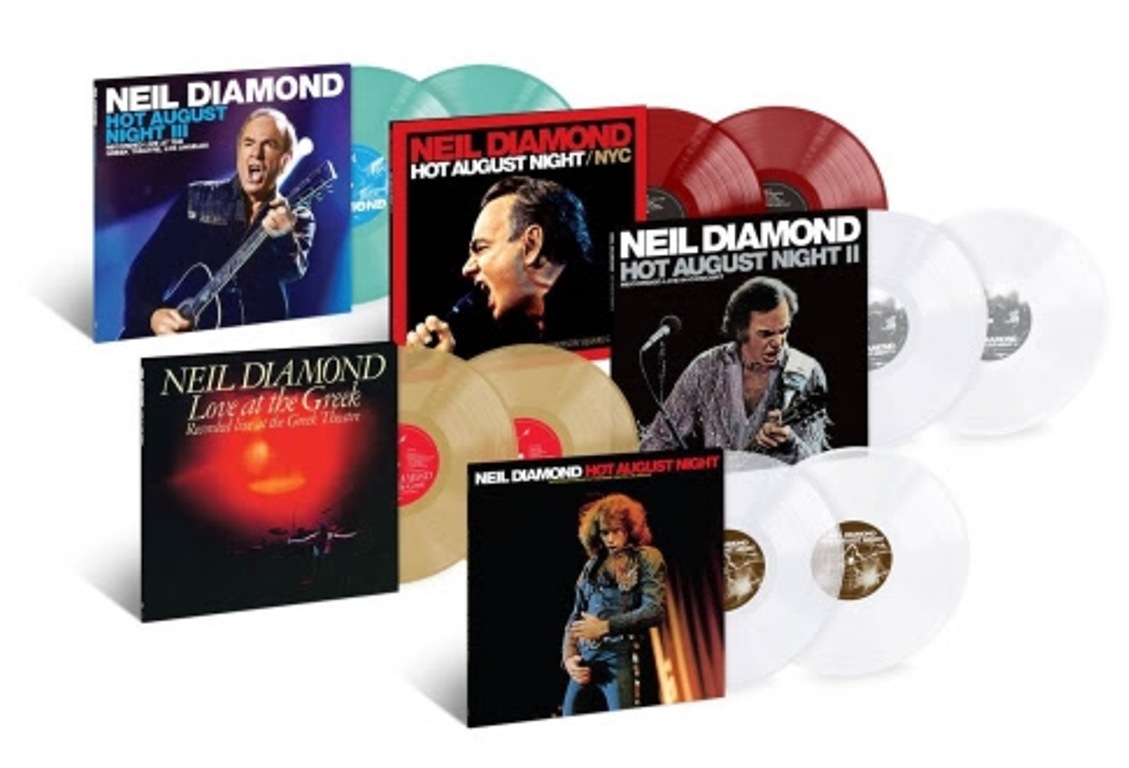 The Platinum-certified Hot August Night II (the follow up to the original Hot August Night album) was recorded in August of 1986 and initially released in 1987, reaching #59 on the Billboard 200 chart.  Hot August Night II features twenty of Diamond's biggest hits, including "Love On The Rocks," "America," and "Song Sung Blue" and will also be available on vinyl for the first time in 30 years as a black 2LP or a white limited-edition 2LP. Listen to Hot August Night II, HERE.

Hot August Night Ill chronicles Diamond's triumphant return to the legendary Greek Theatre in Los Angeles in August 2012. The magical evening was Diamond's 40th anniversary celebration of the original multiplatinum-selling Hot August Night collection that was recorded at the very same venue in 1972. Following the 2012 shows at The Greek, Billboard Magazine said of Diamond's performance, "His voice remains powerful and accurate; he reaches towards the baritone register for emphasis, just as he did in the 70's. …he never falters in delivering every line with conviction." From the fine acoustic twang of "Forever in Blue Jeans" to the pure Americana swing of "Kentucky Woman" to the eternal sing-along sunshine of "Sweet Caroline" to the raw emotionality of "I Am…I Said" to the welcoming arms of "America."

All-Time Greatest Hits marks the Grammy® winner and Rock and Roll Hall of Fame inductee's most comprehensive hits collection, encompasses the artist's entire body of work, from the earliest recordings through the present-day. Neil Diamond's All-Time Greatest Hits black 2LP features the original studio recordings of such standards as "Sweet Caroline," "Holly Holy," "I Am…I Said," and chart-toppers like "Cracklin' Rosie," "Song Sung Blue," and the rarely heard original solo version of "You Don't Bring Me Flowers." The set captures his beginnings as a songwriter-turned-singer in New York to his multi-platinum days in Hollywood. Listen to All-Time Greatest Hits, HERE.

Throughout his illustrious and wide-ranging career, Neil Diamond has sold over 130 million albums worldwide and has dominated the charts for more than five decades with 38 Top 40 singles and 16 Top 10 albums. He has achieved record sales with 40 Gold albums, 21 Platinum albums, and 11 Multi-Platinum albums.

A Grammy Award-winning artist, Diamond is a member of the Rock and Roll Hall of Fame, the Songwriters Hall Of Fame, and has recently received The Johnny Mercer Award and the Sammy Cahn Lifetime Achievement Award, two of the highest honors bestowed upon songwriters. Diamond's many other achievements include a Golden Globe Award, 13 Grammy nominations, ASCAP Film and Television Award, Billboard Icon Award, American Music Award, and 2009's NARAS's MusiCares Person of the Year Award. In 2011, Diamond received the prestigious Kennedy Center Honor for his lifetime of contributions to American culture.