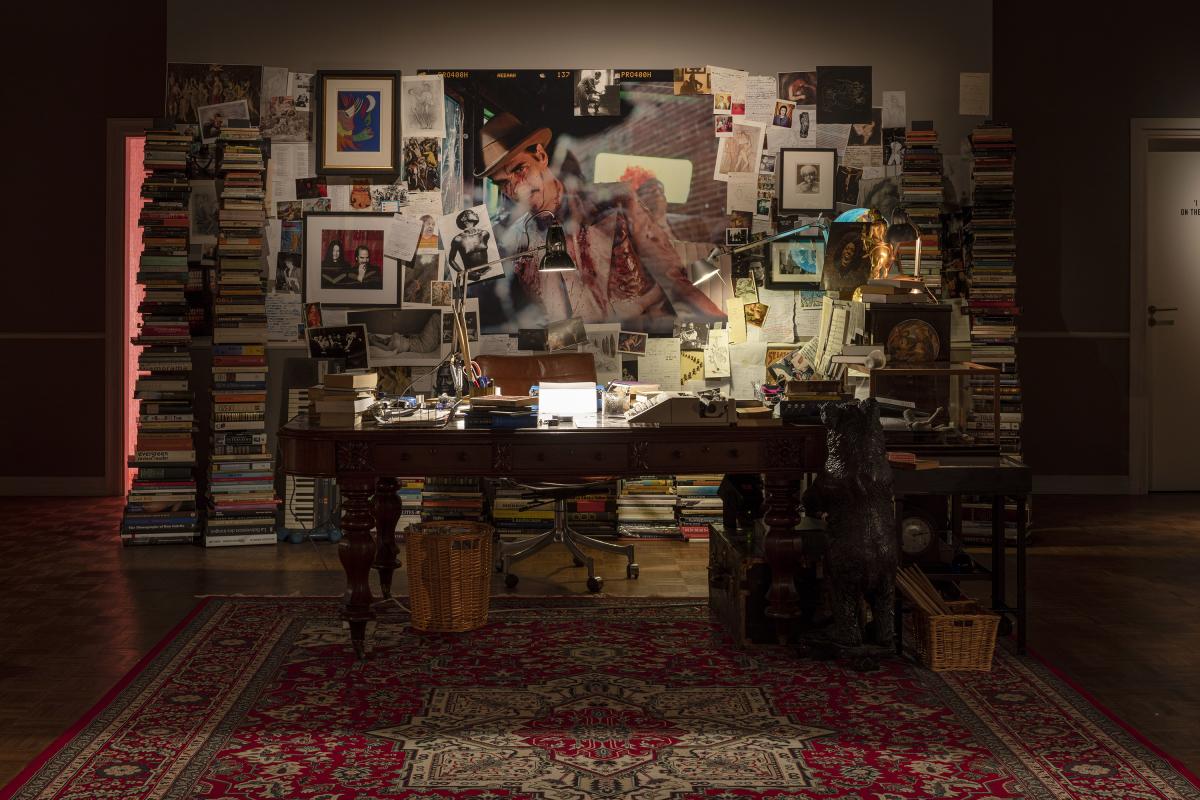 Stranger Than Kindness: The Nick Cave Exhibition opens Friday, April 8 at the Galerie de la Maison du Festival in Montreal. Tickets will go on sale on Friday, March 4 at 10 a.m. via evenko.ca

This is the North American premiere of the exhibition, which was previously presented at The Black Diamond, Copenhagen, Denmark. There are currently no plans for the exhibition to travel to the USA.

The exhibition was met with acclaim from press and visitors alike when it opened in Copenhagen in March 2020.

Stranger Than Kindness: The Nick Cave Exhibition is an unprecedented look into the creative world of musician, storyteller and cultural icon Nick Cave. With more than 300 objects collected or created by Nick Cave through six decades of his creative and private life brought together in large-scale installations, the exhibition is an artwork in itself. Created for The Black Diamond of The Royal Danish Library in Copenhagen, and with Cave as a co-curator and co-designer, the exhibition is an unorthodox fusion of biography, autobiography and fiction, asking what shapes our lives and makes us who we are.

Nick Cave’s body of work encompasses a wide range of media and modes of expression, with narrative forms at its heart. Stranger Than Kindness: The Nick Cave Exhibition invites visitors to follow Cave’s development as an artist – and to gain insight into the overarching themes of his work, his working methods  and  the  many  sources  of  inspiration  underpinning it all. Behind each work is an  equally fascinating artistic process not originally intended for public view; the exhibition opens up the innermost parts of Cave’s creative universe and offers a story of its own.

Stranger Than Kindness covers the journey from Cave’s childhood in 1960s Wangaratta, Australia, through the chaotic years with his first bands, The Boys Next Door and The Birthday Party, and his relocation to Berlin and then London. Central is the ever-evolving collaboration in Nick Cave & The Bad Seeds, from the band’s inception in Cave’s most obsessive period in Berlin, up to their latest release Ghosteen (2019), widely acknowledged as their best work ever. The exhibition reveals how Nick Cave’s life, music, archives and fictions continue to intertwine, inform and inspire each other.

IN COLLABORATION WITH NICK CAVE

Stranger Than Kindness has been designed in collaboration with Nick Cave to create a series of immersive installations which allow visitors to inhabit the thoughts and creative process of an artist. It is a tangible, physical narrative, in which the space and exhibition design become an extension of the many stories contained within Cave’s life and writings. “When the Royal Danish Library contacted me with the idea of a “Nick Cave Exhibition” I was reluctant to get involved. I am not nostalgic by nature and I had no time for a trip down Memory Lane. But the team at the library were clearly serious people with a wonderful infectious energy and they drew me in! We created an exhibition that feels unprecedented in its audacious reach, its feet rooted in the past while extending into the uncertain future. In the end we were able to put together an exhibition of extraordinary detail that commented on the fragile and vulnerable nature of identity. I am so proud to be a part of this unique and unorthodox exhibition—
a shattered history we called Stranger Than Kindnes,” Nick Cave

Stranger Than Kindness vibrates between the voice of the curators and the voice of the artist. Cave working closely with the curators has resulted in an original take on the biographical exhibition, allowing a new experience with the material, the objects, and the life and stories of Nick Cave. A merge of biography, autobiography and fiction placed in a spatial narrative - and an invitation into an artist’s mythical universe of creation. 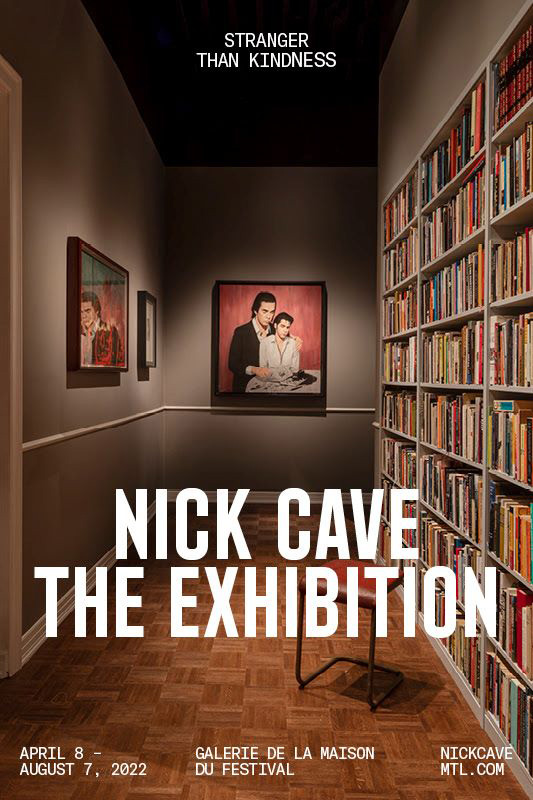 Together with his long-time musical collaborator, Warren Ellis, Cave has also composed and recorded an 800 square meter (approx 8,600 square feet) soundscape that both supports and contrasts the physical narrative across the eight rooms of the exhibition.

Nick Cave’s archives are bountiful and diverse: drafts, original artwork, handwritten lyrics, diaries, photographs, videos, found objects and much more. Rich, obsessive and unorthodox they are a vibrant, inexhaustible source of exploration of his work. This is the wellspring of Nick Cave’s lyrics and their teeming world of imaginative imagery and vivid characters. Delving deep into this archive is not just an act of retrospection, it is also a journey through Cave's history and creative processes.

For Cave there is a close connection between the visual and his narratives. Pictures made from blood and hair, glue and found objects - such as pornographic photographs, religious prayer cards, and kitsch lenticulars - were often the springboards for the songs themselves.

“What you see in this exhibition lives in the intricate world constructed around the song or book or script or score. It is the material that gives birth to and nourishes this official work. There is an enormous amount of this peripheral stuff – drawings, maps, lists, doodles, photographs, paintings, collages, scribblings and drafts – which are the secret and unformed property of the artist. These are not to be seen as artworks so much as the wild-eyed and compulsive superstructure that bears the song or book or script or score along. They are a support system of manic tangential information.”

STRANGER THAN KINDNESS - THE BOOK

The exhibition is accompanied by the book, Stranger Than Kindness, a Sunday Times bestseller published in March 2020. The book was developed and curated by Nick Cave in collaboration with Christina Back and features full colour reproductions of original artwork, handwritten lyrics, photographs and collected personal artefacts along with commentary and meditations from Nick Cave, Janine Barrand and a substantial essay by the acclaimed American writer Darcey Steinke.

The exhibition was developed and designed by Christina Back, Royal Danish Library and Janine Barrand, Arts Centre Melbourne in collaboration with Nick Cave originally for The Black Diamond, Copenhagen. It was curated and produced by Royal Danish Library in collaboration with the Australian Music Vault at Arts Centre Melbourne and Nick Cave Productions.

The exhibition was initially made possible with support from main sponsor Gucci and the Beckett Foundation. The Montreal exhibition is presented and produced by Victor Shiffman (Workers of Art) in partnership with Nick Cave Productions as a co-production with Le Festival International de Jazz de Montréal and evenko.

Nick Cave has a huge global fanbase and is admired by many artists from the musical and art milieus. Since the 80’s, he has performed many shows in Montreal with his band, The Bad Seeds, playing some of the city’s best and most iconic venues and festivals, including the defunct Spectrum, L'Olympia theatre, Église Saint-Jean Baptiste as part of the POP Montreal Festival, and at Parc Jean-Drapeau during the Osheaga Festival. Cave will be touring North America with Warren Ellis through March and early April this year including shows at QET, Vancouver (March 16), Massey Hall, Toronto (March 31) and Montreal’s Place des Arts on April 2 and 3.

Tickets on sale: Friday, March 4 at 10 am via evenko.ca

For all details, please visit : nickcavemtl.com