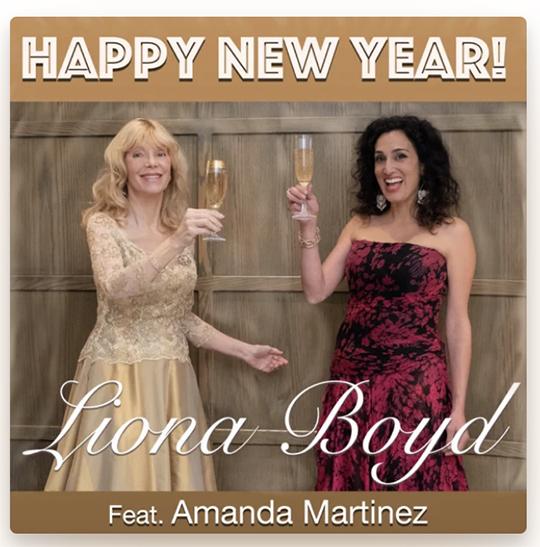 Multi-award winning and Gold- and Platinum-selling Canadian ‘First Lady of the Classical Guitar’ Liona Boyd — and her multi-talented friend, singer/songwriter Amanda Martinez — want to wish you a very special “Happy New Year” with this, their newest single — available now!

“It occurred to me many years ago that, apart from ‘Auld Lang Syne,’ there was no well-known celebratory song that welcomes in the new year while bidding farewell to the previous one,” Boyd recalls. “Even then, ‘Auld Lang Syne’ is, in itself, a slow and nostalgic song that mostly looks backwards, so I decided to write an upbeat pop song with joyful lyrics that people could enjoy dancing to…

“Play this happy song, be sure to sing along and dance around, even if you’re on your own,” she continues. “I guarantee it will lift your spirits!

“My hope, especially during these challenging days of the 2020 pandemic, is that people will share ‘Happy New Year’ with their families and friends, and look forward to a brighter future — whether it’s on New Year’s Eve, or any day of the year.”

Working with her long-time producer Peter Bond, Boyd invited her friend — a fellow multi-talented and inimitable artist, singer/songwriter Amanda Martinez — to join on the timely and multilingual track.

The release also features Boyd’s beloved classical guitar, her radiant talents with which recently garnered her a Lifetime Achievement Award from the National GUITAR Museum.

Previous honourees of the top nod via the National GUITAR Museum include B.B. King, Glen Campbell, and Bonnie Raitt; the Museum added Boyd to the esteemed list in appreciation of her tenured career enthralling millions with her romantic take on classical, folk and world music.

With this adding to Boyd’s growing collection of accolades, Boyd has also received a Lifetime Achievement Award from the JoAnn Falletta International Guitar Competition, and inducted into Guitar Player Magazine’s Gallery of Greats.

Recipient of both the Order of Canada and the Order of Ontario, she’s the winner of five JUNO Awards, five Guitar Player Magazine’s Classical Guitar Musician of the Year awards, Vanier Award, Women Who Make a Difference award, Prix ‘Esprit du Ciècle, and Artist of the Year and Honorary Mayor of San Antonio, Texas — plus four Honorary Doctorate of Law degrees and an Honorary Doctorate of Music degree.

Since the beginning of her career in 1974, Boyd has released 28 albums — many of which have been Gold- and Platinum-selling. She has upwards of 16 Million streams across platforms, and rising, and her Holiday special, A Winter Fantasy, continues to be televised nationally via PBS and CBC across the United States and Canada, respectively — including this December 14th at 10:00pm on WNED and streaming on-demand via CBC’s Gem.

Liona Boyd has appeared in countless outlets around the world, and collaborated with the likes of Sir Andrew Davis, Yo Yo Ma, Eric Clapton, Gordon Lightfoot, Tracy Chapman, Ronny Hawkins, and Olivia Newton-John, to name a few. The author of two books, No Remedy for Love and In My Own Key, Boyd is also a dedicated philanthropist and activist for a lengthy selection of charities close to her heart.