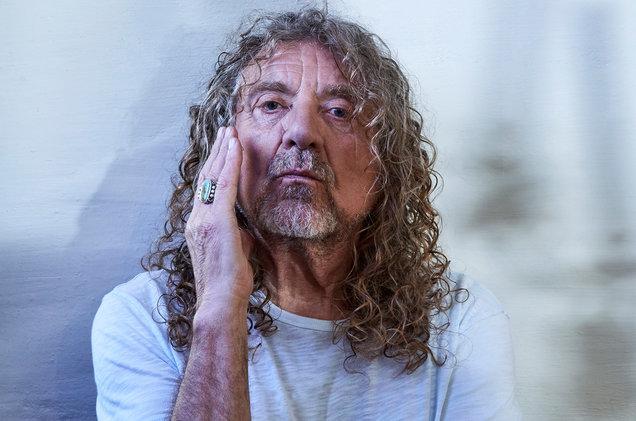 There are stars, superstars and even megastars. Then there is Robert Plant, a guy who is, or has been, all three of them together, and who remains at the very top of the universal musical tree. Refreshingly, speaking with a relaxed Plant, on the near-eve of the release of his latest album, ‘Carry Fire’ on Warner, the man himself is a genuine delight, a man with no axe to grind, no self-obsessed front to maintain, no precious barriers that all too often seem to come with the fame. Much to my relief, Mr. Plant is an instantly likable, friendly, chatty sort-of guy next door. Exactly the kind of guy you feel you’ve known most of your life. Which, if you’ve been listening to music for much of it, is pretty much the case.

Catching up with the man himself, he is enjoying the beauty of the misty Welsh Mountain hill country, an area he is constantly drawn towards and where he clearly feels completely both at home and at ease. We joke about local highlights, having both lived in the area off and on for many years, about his love for a local tipple (a brand of organic Herefordshire cider) and then move on to the music and his love of life, travel, discovery and musical experiment and excitement.

‘About three weeks ago I was driving in the Atlas Mountains in Morocco, near Fez. I was listening to FM radio when suddenly this wonderful music came on and I had to pull in, stop, and grab my phone so I could record it. It was fantastic,’ he says, highlighting his love of music and his own receptive nature to it generally.

In many ways, this is probably a typical example of Plant’s thinking and his open-to-all-new-music-vibe way of working and thinking. Still repeatedly, and unnecessarily, viewed as Mister Led Zeppelin, since leaving the legendary band many years ago, Plant has been carving out an immensely successful international solo career that has seen him gather huge international acclaim in the ever-harsh, demanding world of Nashville Americana with Alison Krauss and Band of Joy, where their joint efforts produced ‘Raising Sand,’ a release that swept the boards at the Americana Grammy end of the business and delivered clear evidence of a questing talent and voice that was up for more, much more, than just rock ’n’ roll music. 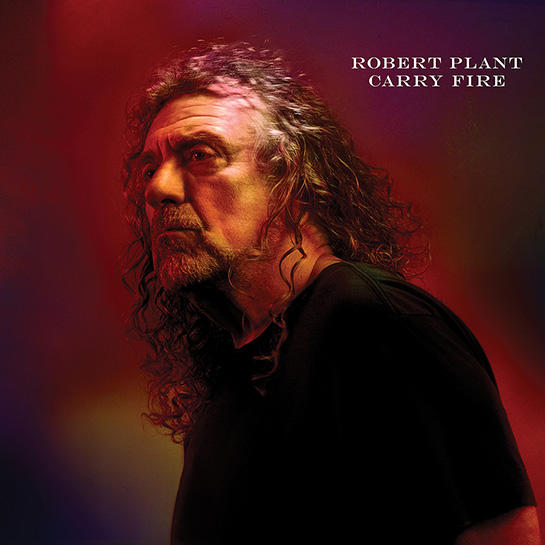 If Plant still has a whole lotta love, it’s, without doubt, a passion focused firmly on the music itself. Describing his current thinking and where he sees himself, he evidently remains locked into the possibilities of music and its power to move and excite:

‘This is not a job,’ he laughs in all seriousness. ‘It’s love, a love affair. A pleasure, a passion, pulsing to the heartbeat of music. To be thrilled still. Hearing something that’s new. Something that still has the power to grab you, to literally stop you in your tracks; having to swallow hard, to hold back the tears, because of the beauty of the music,’ he explains with pleasure and the delight of fresh discovery. Who’d’a’thunkit?

For Plant, music and its iridescent rhythms and rippling waves are what life is all about.  There is no self-satisfied feeling or suggestion here. This is a musician who has ears always open, searching expectantly and knowingly for the next explosive surprise. A man who seems always to have the power to explore, ignite and excite. A musical flame few can match or carry with such evident passion or commitment.

Once again currently working with his band of musical brothers, the Sensational Scene Shifters, Plant is quick to correct me when I suggest they are a ‘support band’: ‘They’re no support band.

We all support each other. They support me and I support them. We work together as one, as musical equals. We each know now what the other might be thinking or about to do. It’s organic and immediate, a real musical understanding,’ he confirms. This time around the band is joined on tracks by young English folk-musician, Seth Lakeman, whom Plant adds, will be touring with them all later this year.

‘We’ll be working hard with the new album, on the road, including Byron Bay Bluesfest. I’m really looking forward to that,’ he says. And when I ask if the touring and travel doesn’t become onerously tiring, and if maybe age might begin to take its toll in that respect, he again swiftly rejects such thoughts: ‘I only do what I want to do and I love the touring and playing, including Oz.’

Plant describes his current musical interests as being attuned to ‘music from the earth,’ by which he seems to mean world-music or indigenous, organic, roots music of whatever color or stripe. Turning to his latest recording, ‘Carry Fire,’ we talk about the use of an electric oud as a lead string instrument, a heady change from driving electric guitar or blistering string-bending fretwork:

‘With the oud, it really is music from the earth,’ he explains. ‘Because it’s fretless, there’s only one way to go with it and that’s got to be the right place. It’s delicate but with complexities. There are shades of T-Bone Walker coming through, like Chuck Berry,’ he believes. ‘It’s all part of a musical journey, a way of life.’

‘I remember at T-Bone’s funeral, Chuck Berry went up to T-Bone’s daughter and told her that if it hadn’t been for her late father, he wouldn’t have had a job. Music is really so important, central to life itself. I get that. I’m in much the same position myself,’ he quips.

Looking back on his time with Alison Krauss, Band of Joy, and the world of modern Americana generally, a connection that gathered world-wide plaudits including multiple Grammy awards in 2009, Plant is happy to have moved on, hinting that the Sensational Space Shifters seem more open to fresh musical influences, inspirations and experiences:

‘It all became, well……just too American, if you know what I mean. Playing with Alison and Band of Joy was a joy. It was wonderful, a great time. We all enjoyed it, I know. But it was all centered on Nashville, Music City. They were never as keen on travel, as me. I still love getting out on the road, seeing and meeting new people, new cultures and experiences along the way. With Band of Joy it was different, more a studio band, maybe. They just didn’t have the same gypsy in them as I have, always happy to be out on the road working.’

And he also confirms that there is at least one more possible album he has squirreled away in his personal archives from his time with the band. When I ask we’re likely to hear it anytime soon by being put out on release, Plant is mildly cautious: ‘I have a second Band of Joy album but I’m not sure if it will see the light of day.’

And with a guy like Robert Plant there are always more than a few surprises in store. One track on the new ‘Carry Fire’ album harks back to an earlier age, a time before even rock ’n roll was king.

From the mid-fifties, ‘Bluebirds over the Mountain’ is nothing short of simple, pure Rockabilly at heart. When I ask about this somewhat surprising inclusion Plant snorts with laughter and clear pleasure:‘I love the song. Pure and simple. I’ve been singing it most of my life. I’ve been doing the song since I was a kid. It’s sort of cheery, part of the roundabout of life. I always pull it in at some time, maybe during rehearsals with every band. I can almost hear them all collectively groan, “Oh, no. Here we go again.”  I always loved the Ricky Valen’s version, I used to sing it at home in the West Midlands as a kid and I still enjoy singing it now,’ he jokes.

On the latest newly recorded version of the number, Plant is joined by a surprise guest on vocals, ex-Pretender, Chrissie Hynde. ‘Chrissie has such a beautiful voice. She fitted the song perfectly, giving it a cheery sort of bounce,’ he says.

But while Plant jokes about adding upbeat songs from his childhood to the mix, he always remains firmly and fully focused on the need to keep up to date, to be open to new sounds and interests:
‘With music, there’s got to be a sort of intimacy. The music might be old, traditional or whatever, but it must always be interesting and moving, emotive at times. I can put my spin on it, but not in a way that’s ever fraudulent. You have to be true to the vision, true to the music at all times. It doesn’t have to be fraudulent in any way. It’s always possible to make enough of an individual noise, I think. These songs are about what we do. They have a sort of synthesized good-feeling about them, I hope. They can be tender, moving, touch a spot. Music and my love of it is a given, it’s not going to go away.’

Considering his latest offering, and the writing process with the Space Shifters, Plant is in a philosophical mind frame: ‘The album was all done in a natural way. Someone will lead with an idea and we all add a bit, till we all end up in the same place. These days music – at least, how I see it  - is like a Lingua Franca. Because of what we play and how we play it, the depth and kind of music we do, we’re never going to have to play, say, a night-club or even a strip-club sort of place. Everybody now knows the groove. In the 1960s, before Zeppelin was Zeppelin, there were great numbers of people around in London, in particular, interested in each other and their individual cultures. There was an open, supportive, mutual interest, that seems to be harder to find nowadays. I’m no anthropologist, I’m not trying to say I’m like Sir Richard Burton, but I’m intrigued by other cultures and their music. Music carries the message. If you listen to some of the African rhythms and instruments, they’re totally amazing. And yet, we all share this same musical love and foundation. Whether we’re in Africa, London or the Middle East, music has a sort of universality; a power to move and affect your life. I worry at times about an alienation that seems to be developing but I’m always optimistic about the music.’

In every way Robert Plant remains an iconic musical figure, no simple frontman or totemic figure-head, he is clearly central to the musical world he inhabits and roams the world with an open eye and ear, always aware of the possibilities that might just be waiting around the next corner. Nothing appears to be musically taboo to this guy, save perhaps thoughts or suggestions of a Zeppelin reunion, a subject we never broached, despite the near-constant media speculation. After all, Plant has been a soloist for something now approaching forty years during which time he has shown himself to be a towering musician with a huge global appeal and outlook. The time for backward glances are long gone, and Plant himself shows absolutely no interest or suggestion of ever looking back. There’s simply too much new, fresh stuff out there to be mined and explored.