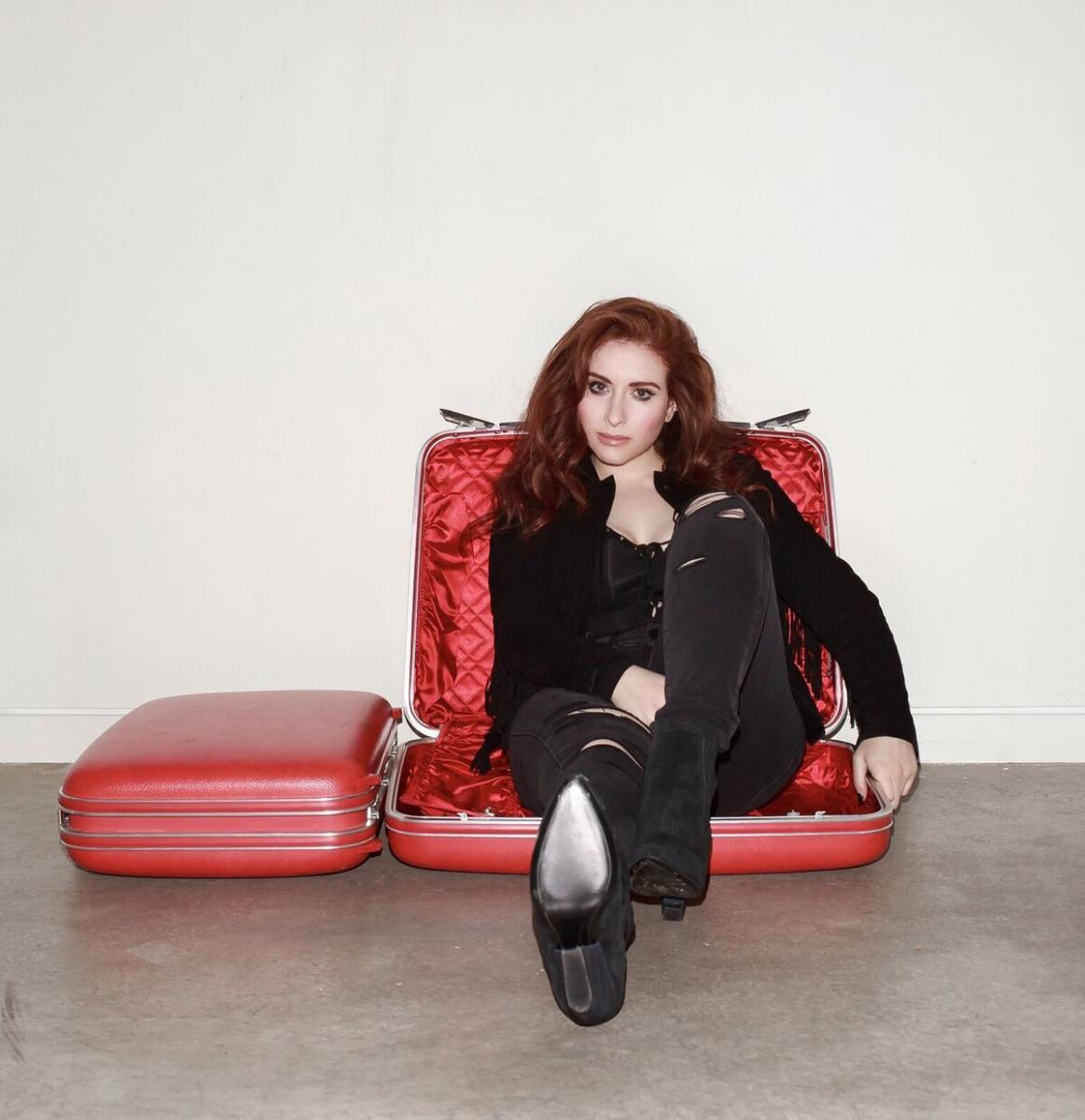 "'What You're Made Of' is about recognizing your own abilities and having the courage to go after your dreams, especially when someone tells you it's impossible or that you're not good enough," reflects Kayla. "Much like the essence of the song, I was able to bring my visions for this video to life by having full creative control over production and direction. I'm lucky that both my parents and my label have supported me from day one; if you have people in your life who push and encourage you, and you believe in yourself, the possibilities are endless. This video means so much to me - I hope others find meaning in it too."

Kayla played a well-received set at WE Day in Montreal on February 21st. "I am thrilled to be taking part in WE Day this year. WE Day is doing incredible things and bringing thousands of people together to celebrate and inspire change. It's an honour to be a part of this."

Montreal post-punk crew Ought is sharing “Disgraced In America” via The FFader, the second preview from their third long player Room Inside The World, out now on Royal Mountain Records in Canada. The song is accompanied by an incredible animated video directed by Heather Rappard, involving glycerine as paint thinner and painstakingly shot in 15-second increments over the course of three weeks.

“Breaking a song down into its tiniest parts actually leaves lots of room to improvise and really consider how to describe it visually,” says Rappard. “I wanted to create a video that morphed and visually changed in the same ways the song does: in the beginning, working with the bright guitar sound and the illustrative qualities of the lyrics, then moving into the abstract at the bridge’s breakdown, to the ending where it completely changes, becoming much noisier and darker with the percussion, spacey synths, and ringing guitar hits.”

Ought's frontman Tim Darcy on the video :“The term “microcosm” came to mind when I read Heather Rappard’s accompanying description for ‘Disgraced In America’. The way they worked on the song, second by second, opened up deeper layers than we’re used to. Anyone who’s tried to memorize a lyric or a melody will know how unseen worlds can open up when you dig in like that. Songs can last for days, years, fucking centuries, and then you pull your head out of the brook and maybe 15 seconds have passed."

On Room Inside The World, growing up doesn’t mean mellowing out so much as it means learning to pay attention, listening carefully and openly, staying somewhere long enough to really understand where you are. Recorded at Rare Book Room in Brooklyn with producer Nicolas Vernhes (Deerhunter, Animal Collective, Silver Jews), Room Inside The World explores themes that have always concerned the band—identity, connection, survival in a precarious world but with a bolder, more nuanced sound palette. Vibraphone, justly intonated synthesizers, drum machines, and a 70-piece choir suffuse the precise post-punk breakdowns that spangled Ought’s first two albums, giving rise to an emotional complexity that pushes their characteristically taut sound to greater depths.

Savannah-founded, Brooklyn-based trio Triathlon deal in a retro stoner pop that connects legacy artist Michael Franks with Frank Ocean and ends in some languidly chillin' sounds. When we talk of atmosphere in music we tend to think of records that stir something definitive within us; recalling certain places and events. Triathlon undoubtedly create distinct environments of their own, but there’s always been something untouchable about it, like being allowed to wander through a world that wasn’t built for you. Where water replaces air, where the space between things holds a physical form that can be twisted and manipulated.

Brand new album ‘Online’ is the band’s first full-length since moving from Savannah to New York, and it’s a relocation that seems to have had a marked impact on this new chapter ; the sticky, claustrophobic nature of the city’s beating heart always audible and existent, even in the record’s quietest moments.

Introduced by lead single ‘Day One’ and it’s indicative of those aforementioned sentiments; the darkly sumptuous face it presents counterbalanced by lyrics that swim against that otherwise sweet tide: “Can I tell you something? I’ve been up to nothing / Demons in my eyes like I’m feeling ugly / Hoping that I’m high so they make assumptions / My fingers to the sky so they see 'em coming,” they sing, over a brooding backing track that throbs like the distant noise of a city life we’re ultimately detached from.

Never has that balance between light and dark been better realised, and it’s a trait that adds a deep levels to that signature Triathlon sound. These are the woozy hours of the morning, where conversations are freed up by a loss of inhibition, where we dream of sunshine in the dark corners of a room, where the barely-lit streets, punctuated by the orange glow of streetlights, seem to lead to places the day would never allow.

Based around inventive instrumental loops and sweet pop vocals, which shift between weightless and heavy with one soft sigh, the trio have crafted thirteen tracks that showcase their most detailed and engrossing work to-date. Laid-back, R’n’B jams are the records defining feature - opening track ‘3’ is an engrossing five-minute entry-point; the previously-released Bad Mood still feels captivatingly weightless - but we also get radiant instrumental jams (Plant’s jazz-like 90-second interlude) and tender, skeletal ballads such as closing track ‘ True’; a sprawling five-minutes of sumptuous idiosyncrasies.

Artpop duo Snowblink are sharing the new video for“Exotic Bird” from latest album Returning Current. Filmed in Los Angeles with director Dawn Garcia (Destroyer’s “Kaputt”) and styled by Christina Marie-Karr Lyon, the song “began as a repository for an unrealizable crush, a place for those difficult and irresolvable feelings to live,” says Daniela Gesundheit. “It has since taken on a different meaning for me as I have performed it and re-worked the song for various contexts. I now think of the Exotic Bird as a sort of avatar for deep longing - that deep longing starts to take the form of brilliant iridescent feathers, a proud, unexpected beak, an unforeseen wingspan, a wild call, and it comes and perches on one's shoulder as a co-pilot towards the expansive unknown.”

Returning Current , is an unflinching study of human relationships – to self, to other, and to Other, and to the threat or actuality of losing those unrepeatable prizes. The duo of Daniela Gesundheit andDan Goldman were joined in studio for the creation ofReturning Current was co-producer Robbie Lackritz (Feist, Bahamas), and a cast of acclaimed musicians including Leslie Feist, Owen Pallett, Barbara Gruska (Fiona Apple, Jenny Lewis, Ray LaMontagne), Johnny Spence (Tegan and Sara), Thom Gill, Ariel Engle (AroarA),Steven Foster (Doldrums),Felicity Williams (Bahamas),Philipe Melanson (Rufus Wainwright), Mika Posen (Timber Timbre).

On their third full-length album, Animalia, Canmore, Alberta's Elk Run & Riot continue to refine their songwriting with AOR-ready arrangements—ringing guitars, soaring harmonies and heartfelt melodies. Animalia is officially released March 2 on vinyl and digital through elkrunriot.com as the band tours throughout western Canada.

Using a live-in-the-studio recording approach, the creative core ofRyan Schepens (vocals/guitar), Andrew Cotter (vocals/bass/guitar), and Brian Bailey ( mandolin/bass) struck the perfect balance between their finely honed musicianship and the dynamic live performances for which they're known .

The songs on Animalia are a mix of old and new. The band experienced a fertile writing period during summer 2017, while other songs date back to Elk Run & Riot’s beginnings, dusted off and given a facelift. It all came together during two intense days in September 2017 at Calgary’s Studio D, overseen by co-producer/engineerSteve Dierkens, who also provided drums along with Kent McRae.

Lyrically, the songs tell stories of love, addiction, and everything in between that goes on in the trenches of the Bow Valley. Among Animalia’s standout tracks are “Wandering,” a story about coming to terms with a relationship that is too far gone to bring back, and “Industry Night,” a shout out to those who work in the service sector in the tourist mecca, Banff. It’s a tale of life moving way too fast but at the same time not going anywhere. “Something To Prove” reveals a darker side to the record, examining the struggle of life’s uphill climb, while “Thick As Thieves” describes two souls coming together under the worst conditions and finding reassurance that all they need are each other. Since forming in 2013, Elk Run & Riot have made it their priority to write songs that reflect who they are and where they live. For the alternative folk outfit, that environment is Alberta’s Bow Valley in the Rocky Mountains.

Working to develop a distinctive sound, Elk Run & Riot lean heavily on their defining characteristic, the band members’ chemistry as vocalists. On their first two records they took full advantage of multi-tracking capabilities to craft three-and-four-part Beach Boy-esque harmonies, but on Animalia their vocal blend comes across intimately and vividly in the simplified setting.

Reuben and The Dark’s “Hurricane” is a haunting song about the duality of strength and vulnerability. On this first new release since 2016’s “Heart In Two,” Reuben Bullock communes with the potent forces at the core of his spirited, shadowed folk music. “Hurricane” is draped with the mystic symbolism Reuben finds at play in his real life, capturing the surreal essence of dreams in his most vivid, enveloping song yet.

“‘Hurricane’ is a premonition of things happening in my life that I didn't understand until they actually came to pass. It is about the discovery of the power in that: of being caught in the eye of the storm, but holding some control of it,” Reuben says. “This song confronts the idea of creating chaos for one’s own comfort.”

Over the tense build of its arc, Reuben’s voice bays in its upper registers, vacillating with the darkness manifest in his waking life : I am broken / I am brave / The way the body behaves I am free / I’m afraid / A mirror of my mistakes

“Hurricane” is Reuben at his most empowered – both heartened and broken-hearted – chasing a sound as immense as the emotional source of his music. With his imagistic storytelling never better enhanced by dynamic, stratified production, on “Hurricane” Reuben And The Dark wrestles clarity from the depths of soulful reckoning

BITS'N'PIECES What I Liked At Winterfolk- The everygirl yearnings of Melanie Peterson, the charming whimsies of Maggie & Mr Rogers, Santerias tearing it up with a tropic flavva, tasty finger pickin' from David Essig and D'Arcy Wickham, Rob Lutes coming from an eloquent and rootsy place between JJ Cale and Tom Waites, Piper Hayes showing the polish and confidence accrued from her recent gigging in the US, the lush and commanding contralto ofSigne Miranda, politically chargedNoah Zacharin kickin' our asses with tunes like " Proxima B', Kim Doolittle alleycat growling her way through early phone sex hit "Talk To Me Baby", Durham County Poets casting sonic shadows of The Band and Kings Of Leon.