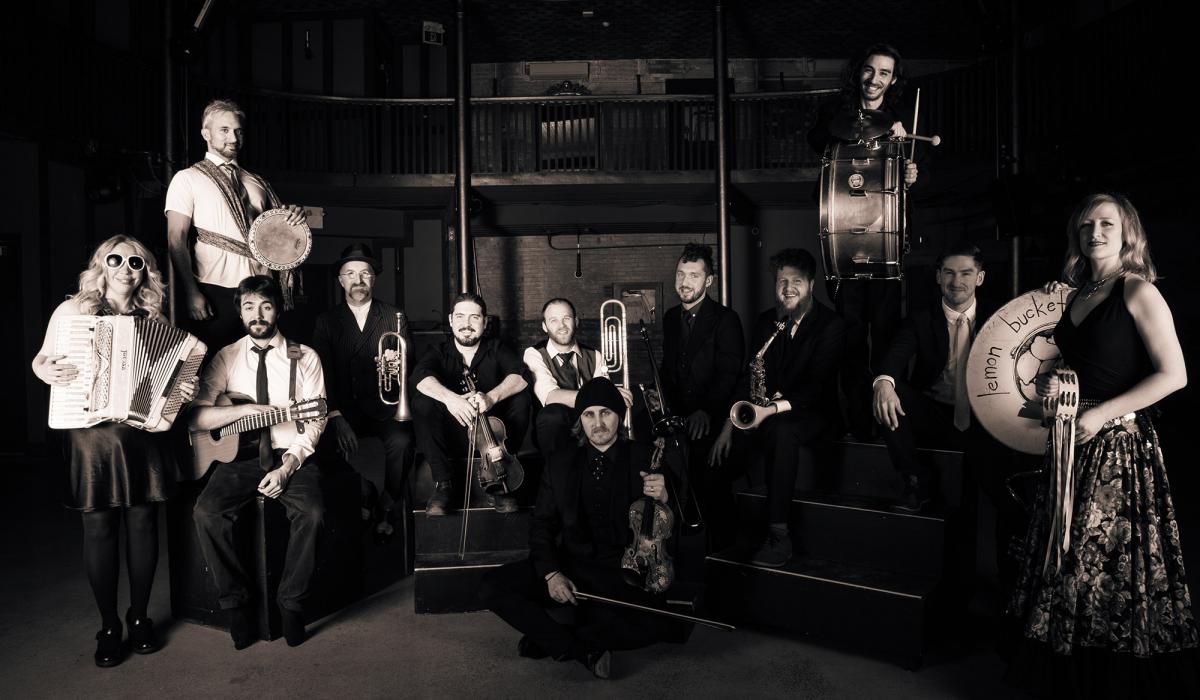 A guerilla-punk-Balkan-folk-brass band massive like no other, LBO traces their genesis back about 8 years to the streets of Toronto, where a quartet of energetic busking troubadours began to amass a battalion of like-minded musical travellers, and the dozen strong Orkestra was born. Since then they’ve been nominated for 2 Junos and won a Canadian Folk Music award, been heralded as a groundbreaking, genre-bending phenomenon by media and fans. They’ve toured in more than a dozen countries, leaving a trail of fiercely dedicated fans in their wake. Equal parts exhilarating precision and reckless abandon, their live shows are truly immersive experiences, ranging from the ecstatic to the cathartic.

Their current repertoire is largely based on re-worked traditional folk songs picked up from the locals while on tour through Romania, Ukraine, Serbia, and Macedonia in 2014. Each one is spiked with their unique blend of punk, funk, psychedelia and swing, creating a sound that is truly their own. As at home in the speakeasy as the concert hall, LBO has stormed the international scene with their irresistible brass band mayhem. Lemon Bucket Orkestra plays Hugh's Room Live Wed. Jun.7, showtime's 8.30 pm

After a highly successful Australian tour, and winning the Cobalt Prize at the Maple Blues Awards in January, Ann Vriend (AV) is currently working new EP Anybody's Different (Aporia Records). AV can take you by surprise. At every show, people say, "I didn't expect such a big voice to come out of such a tiny frame!" Her ballads bring people to tears, but then she cracks a witty, self-effacing joke and takes off her shiny second-hand high heels to play the piano. AV sings her heart out about her views of the world; her matter-of-fact, non-sugar-coated observations from her inner city neighborhood; her hard life lessons and yet there is a soulful, hopeful persistence for herself and the world to be better. Sounds all earnest millennial but a knowingness in the voice and a willingness to pump up the beats offsets that nicely.

New single, "Get Back To Me," is an old-school, funky, upbeat number, sexy and fun, with a gospel-style call-and-response at the end of each chorus, yearning for a lover to come back, even (or especially) "if it takes all night." It’s fueled by a huge, irresistible dance beat and boasts a killer vocal breakdown at the finale. The rest of her new EP Anybody’s Different follows a similar template, matching stimulating grooves with well-considered views on the rollercoaster of romance.

With the vocals on "All that I Can " recorded primarily in one take, the song has a live-off-the-floor feeling, reminiscent of early gospel and soul recordings in the era of Sam Cooke, but with retro hip-hop drums. The lyrics of the song are an earnest promise to a lover to do "all that I can" if the lover is willing to "take me just as I am."“Will You Be There” is a compelling song propelled by an irresistible New Orleans beat, a catchy horn sample, and Vriend’s vocal prowess. The song explains how easy it is to have fun in the party scene, but the real test of a relationship is "will you be there, for the other part?" "Real Love," features AV’s gorgeous, expressive riding atop a breezy reggae/ska groove and subtle but propulsive horns to get to the challenging home truth that "real love is harder than it seems." The title track is a minor-key, soul-pop anthem about AV's observation that the most important things between humans are the same. It's a call for global human rights in the face of heightened tribalism and fear of the other. AV will be bringing Anybody's Different to a showplace near you this summer.

With Oh Susanna’s (Suzie Ungerleider) new album, A Girl In Teen City freshly out, the JUNO Award nominated songwriter is celebrating by sharing the new video for “Tickets On The Weekend”. The video uses “outrageous teenage punk rock photos of me and my friends, punk rock gig posters, tickets, photos of punk rock shows in Vancouver (some by the legendary photographer Bev Davies) as well as teenage photos of fans of mine,” says Ungerleider. “The song tells a true story about me and my friends missing a show of the punk band DOA because we got caught for buying liquor. But really it is a universal story of all of us whoever got into mischief as a teenager. So it was really important to me to include as many teenager photos as possible. It is a celebration of who we were back when we were just finding ourselves in the world.”

On A Girl In Teen City, Oh Susanna discovers what it means to be undone by love, the exuberant freedom under the cover of night, and music bursting with riotous rebellion. “Trying to find out who she is while trying to be something she isn’t,” says Ungerleider. “Falling in love,  getting drunk , having her heart broken, hanging out with friends in bedrooms, basements and parking lots, sneaking into shows in burnt out warehouses, watching the  waves, walking home over bridges and railroad  tracks in all that endless rain.” Like a coming of age novel, A Girl In Teen City, is both piercingly specific and exhilaratingly familiar. No matter where you grew up, or where you live, the songs will bring you home.

A Girl In Teen City reunites Ungerleider with producer Jim Bryson. The pair collaborated on previous release Namedropper, an album featuring the songs of Canada’s top songwriters written specifically for Oh Susanna to interpret. This time, with the urging by her friend and co-conspirator, Bryson, she embarked on a time machine to visit her teenage self in a sleepy port town that she thought no one had ever heard of.

Jeffery Straker's latest album, Dirt Road Confessional, is fresh out and the Saskatchewan piano man is taking it across Canada before hitting up the Euro Festival circuits. As evidenced by the infectious track"Boom Boom" Dirt Road Confessional pushes the boundaries of what it means to be a piano balladeer. Utilizing themes both contemplative and joyous, the 12-song collection encapsulates Straker’s experiences of playing over 200 shows around the world since the release of his previous album, 2015’s North Star Falling.

Straker regularly draws comparisons to a young Billy Joel or Elton John, with touches of Rufus Wainwright and Harry Nilsson thrown in, but on Dirt Road Confessional his personal storytelling style has evolved by leaps and bounds. He was determined to explore different approaches in the studio, which led the album to be constructed out of five separate sessions.

Despite the many hands being involved in the end result, the foundation of Dirt Road Confessional is Straker’s unwavering sonic vision for the record, and its story about finding love while at the same time finding courage to pursue one’s art. That tug of war inspired the creative strides Jeffery Straker has made onDirt Road Confessional. It's all in the grooves.

In advance of their new album Sugar At The Gate , Montreal's TOPS of the popsters are back to share "Further", the third single from the project, courtesy of W Magazine . A mellow and dreamily catchy track, "Further" is additional proof of the diverse sounds that the band is playing with on their forthcoming record. "'Further' lays between the realization that you've restrained your true feelings and allowing yourself the freedom to want more," explain Jane and David from the band. "It's an emotional song, but I hope ultimately it's uplifting."

For Sugar At The Gate, their third and most ambitious album, TOPS reached out to LA. They lived and recorded at "Glamdale," a mini-mansion and former brothel located in the Jewel City, Glendale, CA. The unassuming record unfolds slowly, taking time to reveal itself. Like nearly everything TOPS does, multiple meanings overlap with the album's title referring to orgasm, but also to carrot chasing, gatekeeping, and the social contract.

Vocalist-songwriter Jane Penny , at this point one of the most notable vocalists of her generation, took time during the recording learning how to drive in the Forest Lawn Cemetery parking lot. "Living in LA was living out a teenage fantasy, living with your band and practicing in the garage. It was also the first time we've ever had that much space to make music. I took the experience of living in LA as a challenge to make music that I know is real to me, in the sense of it feeling true and containing true feelings, but also recordings of great songs, the real thing." Jane Penny and David Carriere (guitarist-songwriter) contributed to the album's lyrics as much separately as together. Both their perspectives are heartfelt, with Penny's sometimes cryptic lyrics betraying something of her unconscious.

All of TOPS recordings have been produced by the band, who have self recorded the majority of their work to date. Riley Fleck's distinct and controlled drumming style is key to the arrangements on Sugar at the Gate. A sensitivity in his playing and strong sense of discretion is a distinguishing feature of TOPS' sound. Sugar at the Gate was released on June 2 worldwide on Arbutus Records .

The titles on Frost’s new EP Rebound tell the tale: " Rebound Bitch," "Sex Trip," "Red Flags" and " Witchdoctor." Frost is obviously writing songs that are spiked with an attitude of brazen, female empowerment, while combining elements of Americana, swing, surf, and spaghetti western, all set to big beats, massive horns, and a cinematic film-noir vibe.

Both "Sex Trip" and "Rebound Bitch" portray a spurned lover turned bi-curious, looking to boldly explore an LGBTQ alternative lifestyle. Equally bold are the loud, brassy horns, and twangy surf guitars that drive each song. The former track balances these elements with beautifully arranged strings and harp. On" Witchdoctor," Frost’s haunted and haunting voice tells the tale of a brief but deep, fleeting encounter so powerful and memorable that it actually cures your blues and changes your life. "Red Flags" is especially cinematic, moving from a growling muted trumpet to a languorous bridge, culminating in Frost's litany of dismissals for a nasty hustler. The song is a cautionary tale about protecting one’s heart and avoiding the ensnarement of online dating.

Lily Frost is celebrated for her earlier recordings, such as 2008’s Lily Swings, which featured swing renditions of Billie Holiday songs, or for all of her 12 original albums to date. Well known from song placements in TV shows likeGrey’s Anatomy,Charmed,Mistresses, Crazy Beautiful and Being Erica, or TV commercials for Chevy Cobalt and The Bay, Frost has earned a place in Canada’s music scene elite, quirky division.

So The Silver Dollar Room closed its doors on May 1 st to make way for urban development. Once the Waverley Hotel, Silver Dollar Room and Comfort Zone are demolished a student housing complex and a new live music venue will be constructed on that well traveled corner of Spadina and College. In recent years Indie rock had slowly transformed the one time blues club into a successful new music venue. That genre celebrated the club’s departure with an over the top final week of shows to say goodbye and we'd all love to do it again.

When the dust settled the owners decided to dig back a little deeper into the history of the place that’s housed live music since New Year's Eve 1957 and celebrate its life as “Toronto’s Premier Blues Night Club”. A banner it held proudly from 1994-2010.

Gary Kendall , long time bassist with The Downchild Blues Band and musical director of The Maple Blues Awards had been the driving force behind the club's blues years. He was asked to put together a show with some of the artists who had supported the club during that era. A day or two of email and phone put THE LAST SHUFFLE in motion giving Toronto’s blues lovers a chance for one last boogie before the wrecking ball swings.

And that was all he wrote...