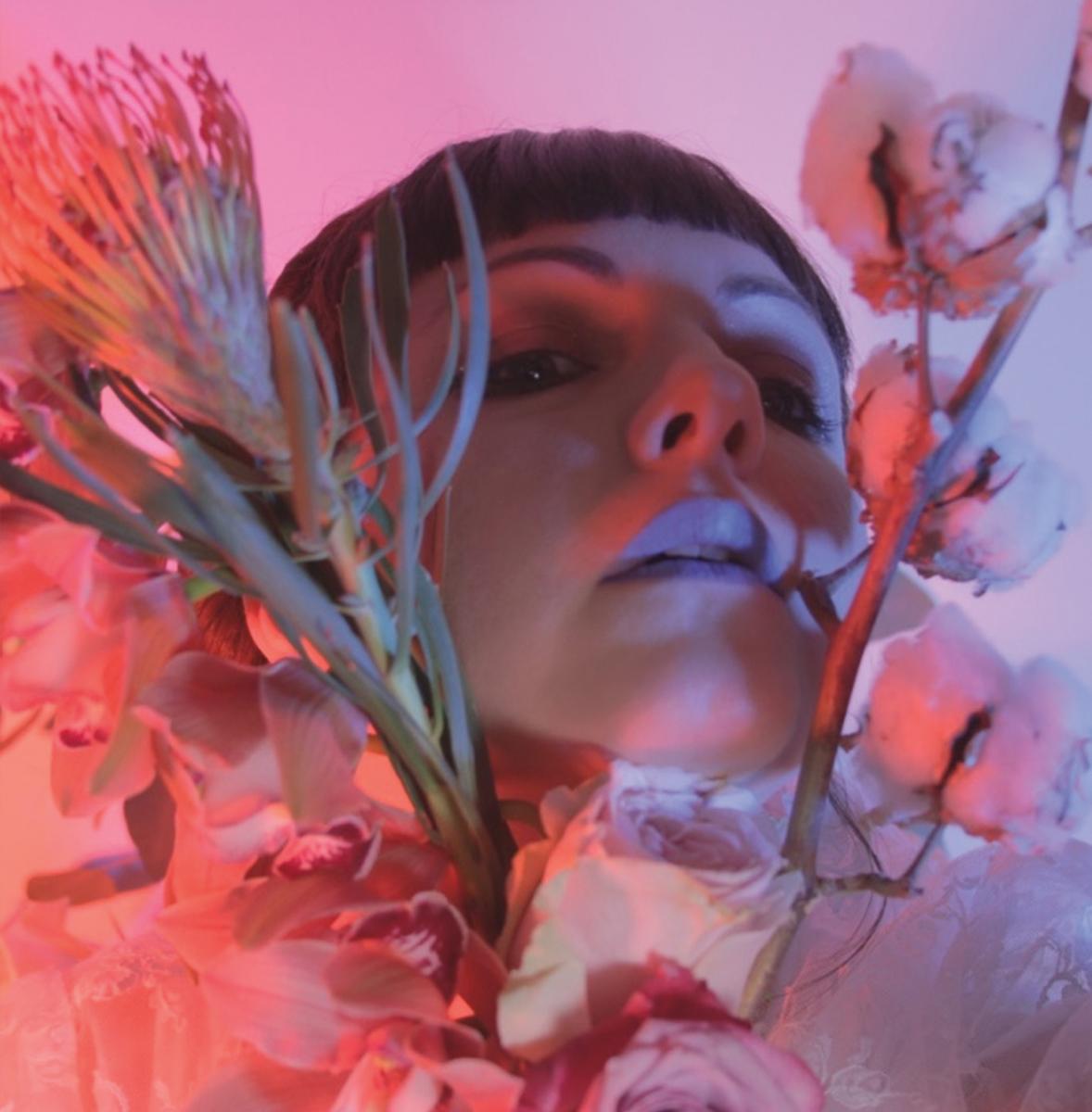 With all the grey clouds and freezing rain, thought we’d start with music bright, warm and of curious intent. Victoria pop experimentalist Lief Hall (a former member of MYTHS/The Mutators) is large in Japan, with a nice fan base and two record labels, Moorworks and Fennelly, which are joint-releasing her entrancing new album Roses For Ruins in Japan. The album, released in North America in April 2018, will be available on CD in Japan on March 6, 2019.

Just out is 'Glass & Obsidian', the second music video from Roses for Ruins. With its minimalist beats, distant reverberating squeals and low hushed vocal choruses, the song uses imagery of the earth's elements colliding and transforming to explore forms of renewal and radical change. Earth, metal, crystal and air emerge throughout this video as themes which bring to life the song’s lyrics through sparse, surreal and fantasy-like environments. Dramatic lighting shimmers reflect and flares accentuate the hypnotic and dream-like quality of the music while dancers explore the sound through austere and sensual movement.

The video was directed, choreographed and edited by Lief Hall in collaboration with cinematographer Shayne Zwickel and stars dancers Marc Arboleda and Nancy Lee with styling by Chris Reed.To support the release, Lief Hall embarks on an 11-date tour of Japan starting March 1st. There’s talk of a mid-April North America jaunt.

Looks like there are only two top-shelf Canadian female guitarists currently internationally active. Both St. Vincent and Donna Grantis, while fluent in all genres, share an enthusiasm for art rock of the finest caliber, and which has been heralded as such by giants in the field, namely David Byrne and Prince, respectively. Grantis earned her stripes as co-lead guitarist in Prince’s celebrated funk-rock band, 3RDEYEGIRL, and a member of his legendary supergroup, New Power Generation. Having taken a step back upon the passing of His Purpleness, Grantis has re-emerged with her debut solo album, Diamonds & Dynamite, dropping March 22, 2019, via Entertainment One.

As co-lead guitarist in Prince’s most rock-heavy band (3RDEYEGIRL), Grantis was named one of fifty sensational female guitarists by Guitar Player Magazine: “Trading blazing solos with the late Purple One on a nightly basis, she proved her mettle, and earned a place in guitar history.” Grantis composed the title track to Prince & 3RDEYEGIRL’s 2014 release, PLECTRUMELECTRUM, which soared to #1 on the Billboard Rock Chart. She toured with Prince throughout the UK, Europe, and North America, with notable performances including three nights headlining the Montreux Jazz Festival, the Essence Festival in New Orleans, the Baltimore Rally 4 Peace concert, and a historic performance at The White House for President Barack Obama and family. Grantis has shared a stage with Pearl Jam, Stevie Wonder, Chaka Khan, Janelle Monáe, and Kendrick Lamar.

Currently, Grantisfronts a five-piece with a unique take on art-rock. Backed by an acclaimed rhythm section, Donna’s incendiary guitar playing is highlighted against the percussive rhythms of tabla master Suphala to create a sound described by The Minneapolis Star Tribune as, “New millennium jazz-rock fusion, sorta like Jeff Beck meets a post-modern Mahavishnu Orchestra.”. I’m down with that.

In the fall of 2018, Grantis released an exclusive 7” featuring new songs “Trashformer” and “Violetta” in collaboration with guitarist Mike McCready (Pearl Jam) and his vinyl label HockeyTalkter Records.

These will heat things up around your way, guaranteed.

Here’s another album giving the feckless digit to winter. New to the Vancouver rock scene, Getaway Vanhas been manoeuvering through venues to bring their slightly out of control punky blues stoner fuzz rock to entertained audiences for the past year. Collectively, the band shares a broad taste in music and using that to their advantage it's translated into a record full of different styles and influences and it came out Feb.23.

"Welcome to the world of Getaway Van. This is our debut full-length, self-titled album. This is something that we are all really proud of. Something that all four of us have seen coming for the better part of a year and a half. Now that it’s here, we are stoked to share it with everyone. You’ll be able to pick out basically every sub-genre that’s been derived from rock in this album, with lyrical content that spans from self-loathing and depression, to love, to serial killers, to cars. We really hope you enjoy it as much as we enjoyed recording it! (And as much as we REALLY enjoy playing it). Thanks for listening."

Listen to Getaway Vanin full at the following link: https://youtu.be/r_Wr6EhFvqg

The self-titled debut album follows the band's two 2018 released EPs, 'Brokedown' and 'Burnouts'. The band showcases a sound that is foot-to-the-floor rock n' roll sure to shake rooms like a straight piped V8. Bringing roots of stoner rock, blues, punk, and folk, Getaway Van is your very own experience of controlled chaos. There’s a guarantee to cling to. Get the music at Bandcamp, iTunes, Amazon.

So rootsy folkist Donovan Woods drops an animated lyric video for “Go to Her”, the latest release following his critically-acclaimed full-length album Both Ways, which has earned the singer-songwriter Polaris Music Prize and JUNO Award nominations, as well as attention from Rolling Stone, Fader, Billboard, American Songwriter, and such. This can only mean that Woodsy is still on the road and there are appetites to be twerked.

Illustrated by long-time collaborator, Andrey Sorokin, the video is a first-person perspective of life on the road and living out of hotels, “It’s about what you decide to do the day after something big and bad happens, and it’s about the anxiety we feel for our loved ones’ safety when we’re away from them,” explains Woods, “when you’re a touring performer, waiting around for the show can be a real killer.”

The song’s release was followed by two nominations at the upcoming 2019 JUNO Awards for Songwriter of the Year and Contemporary Roots Album of the Year (Both Ways). Last month Woods dropped his five-part “Live At Southern Ground Studios” video series, and he will embark on a run of North American tour dates starting February 27.

So dancing is a surefire warm upper and often leads to smiling and suchlike feeling good behaviors. Bringing the party, here’s The Blue Stones. Hailing from Windsor, Ontario, The Blue Stones consist of Tarek Jafar (lead vocals, guitar) and Justin Tessier (drums, backing vocals) – a tandem that has been syncing their sounds since early high school in 2008. By producing a massive and dynamic sound, these guys have set themselves apart and constantly leave people wondering how there are only two of them. The Blue Stones first released a self-titled EP in 2011, which quickly became a hit throughout Ontario and surrounding parts of Canada as they toured the club scene in support of the record.

The guys got back in the studio during University and recorded How's That Sound in 2013, releasing it later that year. The album was sold on Bandcamp both as a physical and digital format, making its way onto Bandcamp's best-selling list in 2013. Following this release, the Blue Stones hit the road again and performed shows with Fitz and the Tantrums, The Stone Foxes, Justin Nozuka & others all throughout Canada and the Detroit area. Then in 2018, the duo released their debut full-length album internationally, Black Holes. This record features a darker and more dynamic side of the group, showing listeners their progression into the alternative/blues-blended sound they possess today. The title track, Black Holes (Solid Ground), has been featured on multiple Rock playlists curated by Spotify, as well as being featured in a week-long ESPN Monday Night Football advertisement during the 2016 NFL season. Of late the sound has taken on psychedelic and space rock influences, drawing them ever so closer to Daft Punk country. These sound like hints as to what the next album could sound like.

This next artist is just gonna blow away winter with sheer power and volume. Mark Morton is lead axe with Virginia prog metal crew Lamb of God and he’s just putting out a solo effort to highlight his other-than-metal sides. Anesthetic is Mark Morton’s debut project under his own name, encapsulating both new tracks, and music he has written over time. For a place to start, check out: Cross Off (feat. Linkin Park’s Chester Bennington), Imaginary Days and Truth Is Dead (feat. Lamb of God’s lead vocalist, Randy Blythe & Alissa White-Gluz of Arch Enemy). The album showcases Mark’s array of influences – one of the strongest coming from the production side, as he worked with longtime Lamb of God producer, JoshWilbur (who has worked with the band for over 16 years and produced for the likes of Steve Earle to LCD Soundsystem). The album’s recording process traversed borders – taking place everywhere from the Los Angeles area to Baltimore to the Cayman Islands.

The album was made alongside a dream team of highly respected musicians from a multitude of musical worlds; some friends, and some who would never be expected to collaborate with metal genre leaders, Lamb of God.

Morton had been writing some of this debut for years. “This album wasn’t a concerted effort to start something outside Lamb of God,” he explains. “Music is always in my head, and until I write and record it, it’s stuck there. But once I record it, it’s out. It’s a catharsis, more for my own sanity.”

"Honestly, initially at the very beginning of the project, I wasn't going to put any traditional heavy metal songs on the album, because my thinking was, 'I do metal with Lamb of God, the reason for this album is to process some of these tunes that aren't so much metal for me.[Producer] Josh Wilbur suggested that we do include a couple of metal songs on the album - the thinking being that Lamb of God fans are going to listen to this album, and want to hear some metal from me. So, pretty early on, we decided to deliberately include some metal tracks.

"What really turned out cool is that it became this duet with Randy [Blythe] and [Arch Enemy's] Alissa [White-Gluz], and it was exciting to see how great their voices sound together. It kind of had this synergy when they came together in the chorus, which is really cool."

The high steppin’ Peptides are getting attention for their latest album Galapagos Vol. 1. They've enjoyed great radio success with the first single "We Fell In Love For The Very Last Time" which was #1 in "spins" on Stingray Canada's Indie Music Chart last week. The full album is a funky, fun, electronic pop confection that holds together from the spacey soul of Invaders replete with ‘whoo whoos,’ through DeeDee Butters’ spiraling top end vocal of "Beautiful Creatures"and the chilly synths and haunted vocals of 80s inspired ‘Savage Love’to the pop perfection of ‘We Fell In Love For The Very Last Time, it all adds up to a solid, radio-friendly collection of contemporary pop.