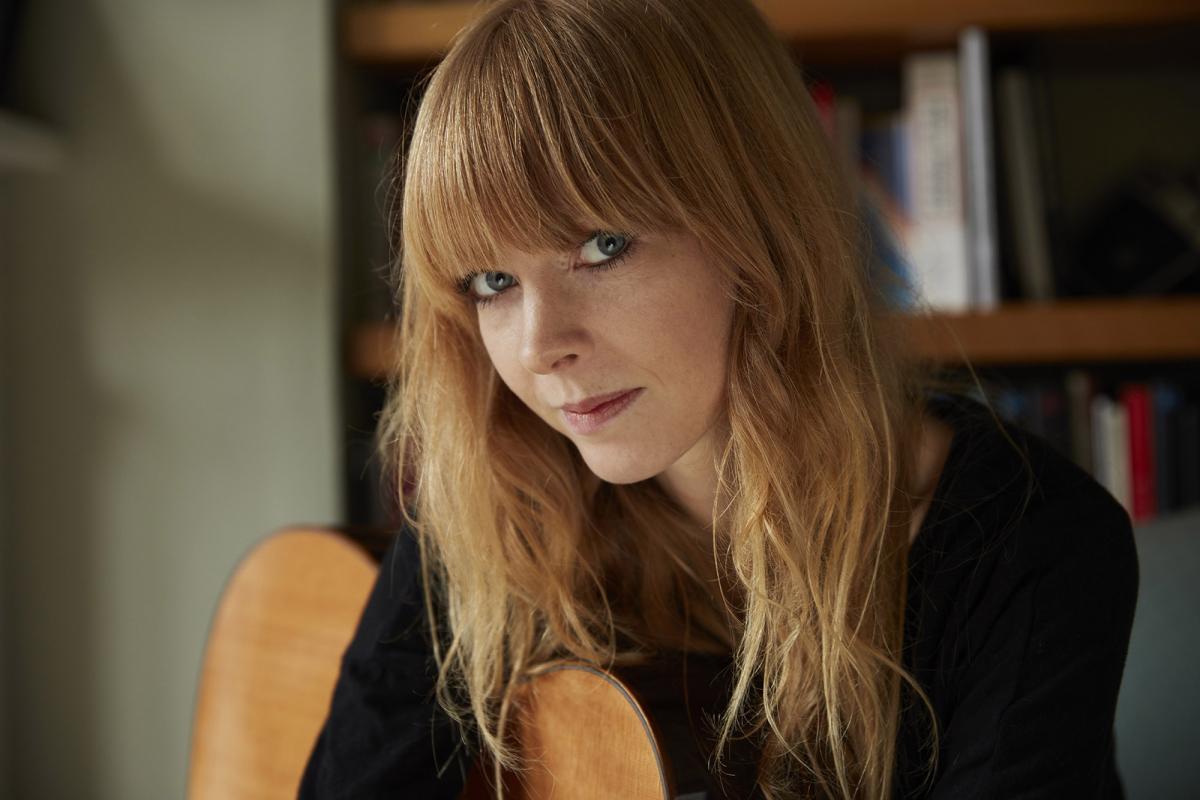 Rose embarked on the making of Something's Changing following her tour for her second, critically acclaimed album Work It Out. Over time, she noticed a steady stream of tweets reaching her from Latin America, and the unlikely statistic that geographically her music was most popular on Spotify in Mexico City. It gave birth to the seed of an idea that became a real labor of love over the next six months. Lucy offered her fans in Latin America a deal: "If you book me a gig, I'll come and stay."

For two months Lucy, with her guitar, a camera and backpack, toured Ecuador, Peru, Chile, Argentina, Paraguay, Uruguay, Brazil and Mexico, playing free shows, staying with fans and "falling back in love with making music." The documentary of her experience there was inspired by "the kindness and faith in music of those she met includes fans blocking the street outside a gig above a launderette, trying to sleep on endless inter-city bus rides and living with families in out-of-the-way towns;" Rose's husband Will Morris filmed as much as the experience as possible along the way.

Rose says "The documentary is a big part of this record. I think it explains why that trip was important and why it led to me making the album that I've made. The trip gave me confidence to do things like record in just one take and the songs came more easily."

With the insight gained during her travels, Lucy set out to make the third album on her own. She began a collaboration with Brighton producer Tim Bidwell, and in his home studio found the ideal place to explore songs for a new album. Major contributions came from by Bidwell, in-house bassist Ben Daniels and drummer Chris Boot as well as guest appearances by Daughter's Elena Tonra, Bear's Den's Marcus Hamblett and Matthew and The Atlas' Emma Gatrill. On two tracks vocal harmonies are provided by The Staves ('Floral Dresses' and 'Is This Called Home').

"The songs just came more naturally after that trip, from feeling good and from learning so much about myself. I feel more comfortable in my own skin that I've ever felt in my life. So there is a lot of searching as well as a lot of discovery on this record." On select dates this year she'll tour alongside the documentary, returning to Latin America first and then India, Europe and Asia along with North America.

NYC-based artist Eden Sela has shared her new video "Nothing But Dreams " (directed by Nick Ace & Mari Juliano ) via Impose , who describe it as "light, spirited, and dreamy." The track is from her new EP, Snake Mother. Through a gradual evolution-a shedding of scar tissue and skin amongst the sandscapes and snakes lurking outside LA, in isolation and freedom, Sela wrote these songs of self-reconciliation.

The four avant-pop songs on Snake Mother tell this autobiographical tale against a restless backdrop of rusty beats, lean piano lines, and melancholic melodies. From the stutter-step samples of " Nothing But Dreams" to the come-hither keys of "Ready For Love," it's as if we've been drawn into a radio dial that exists outside of time and space.

"Jazz standards, folk, and soul are at the center of my songwriting," explains Sela. "I am interested in raw, vulnerable expressions of emotion because I feel like I don't see them enough."

"Snake Mother," explains Sela, "is about the road between the world of vanity and materialism and the deep inward world of the spirit. The deals we make with ourselves to thrive in both worlds simultaneously."

Royal Canoe and Begonia (Alexa Dirks) have joined forces for the new summer jam "Fussin'". Shot in Winnipeg, the video for the track features several hundred cyclists riding in a 'Bike Jam' organized by the Rainbow Trout Music Festival. The video premiers today courtesy of Noisey, who claim it's all "Phat and Funky Wheelies".

"We've had the pleasure of working with our good friend Begonia (Alexa Dirks) on a number of occasions over the years, but this time we wanted to do a proper duet," says Royal Canoe's Matt Peters. "So we all got together and wrote this summer-time song. The track is about a couple going through a little spat. They're both trying to get their way at the other's expense - pushing buttons and playing games… Of course they make up in the chorus and get back on track."

Both Royal Canoe and Begonia will be on tour throughout Canada this summer. Royal Canoe heads to this month before returning home for a run of festivals, while Begonia will support Serena Ryder in between festival stops.

Known for her voice in the JUNO Award winning, harmony-driven group Chic Gamine, NPR listed Begonia as one of the Ten Canadian Artists You Need To Know. CBC Music called her one of the Best New Bands of 2016, Line Of Best Fit included her in their 50 Best Deep Cuts of 2016 list. Album single, "Juniper", from her debut release, Lady In Mind, reached #1 on CBC Radio 2's Top 20 . Dirks was also featured on CBC's National Canada 150 New Year's Eve broadcast, performing live with The Bros. Landreth. The lady is cutting a soul Gospelly groove all her own.

Royal Canoe's latest album, Something Got Lost Between Here And The Orbit , was released to much acclaim. BeatRoute claims that the magic "lies in the band's ability to make infectious tunes without compromising their desire to boldly tinker," while the Winnipeg Free Press called it "funky, daring and often surprising...No two tracks sound the same and each contains its own little universe." Exclaim! also called it "orchestral, theatrical, experimental... Something Got Lost Between Here And The Orbit presents a sound all their own that's distinct and, for the most part, unparalleled."

Boredom. Laziness. Complete apathy. Is it a quarter-life crisis or just an excuse to never grow up?

This is the world of Washed Out's (Ernest Greene) new album Mister Mellow. A fully immersive multimedia experience, the album playfully guides the listener through the highs and lows of this often ridiculous struggle. In classic Millennial fashion, most young adult's perception of their own lives are overblown and overdramatized to the point of absurdity - as are the many ways they distract themselves from the insecurities faced on a daily basis (see social media, fantasy, drugs, music). Mister Mellow shines a light on the humor found in this paradox - how we can be so bored and unhappy in what is often a very privileged, contented life?

Further moving away from the synthesizer-driven sounds of his early work and the more band-driven sound of his work on iconic indie label Sub Pop, Greene continues to carve out a unique sonic identity that stands in direct opposition to most current trends. Instead, Mister Mellow was influenced by classic plunderphonics records of the past as well as the experimental collage techniques of musique concrete. Styles as diverse as free jazz, house, hip-hop and psych are combined together with interludial voiceover samples (often pulled from anonymous Youtube logs) to create a busy, chaotic, and caricaturish mix; one that quickly starts to feel like a mirror of the claustrophobic, hyper-stimulated psyche of most young adults.

Released as an integral companion to Mister Mellow is a full length visual counterpart that utilizes almost every form of animation (collage, claymation, hand-drawn, stop-motion). The aesthetic of each video reflects the handmade, "paint outside the lines" style of Greene's music - and again is a reaction against the sterile, hyper-realistic renderings of most modern digital-based art. The rich, detailed patchwork that makes up Mister Mellow (and its visual accompaniment) is unique in this day of quick-fix, throwaway music-culture.

Conceived over the course of 2 years, it is intensely personal (Greene's only collaborator was mix engineer Cole MGN) - but the ideas and observations found within the album speak to a much larger shared experience that is affecting an entire generation of young adults. An experience that we come to see as both funny and sad.

BITS'N'PIECES The director of a new Dr. Dre doc may have let it slip there's a new Eminem album on the way. According to the BBC , director Allan Hughes said, "People don't know this but Dre records every day. Right now he\s producing at the eleventh hour a track for Eminem's latest album. So Dre's still active in music, you know?" Eminem hasn't released an album since 2013's The Marshall Mathers LP 2 and there has to date been no official confirmation on this.

Eminem hasn't released a record since 2013's The Marshall Mathers LP 2 and there has been no official confirmation.

Eminem hasn't released a record since 2013's The Marshall Mathers LP 2 and there has been no official confirmation.

Soul In The City has returned to Toronto's Casa Loma, continuing until Aug.28 featuring rising soul star Sean Jones. The internationally known musician performs a selection of R&B and Soul classics during his tenure at the castle, all of which takes place under the stars in the Glass Pavilion.

Over the last ten years, Jones has put out two studio albums, several EPs and has won a Juno Award in the category of Best RnB/Soul Recording for his debut release. He will be accompanied by a seven-piece band and special guests. Guests can dine al fresco in the gardens on Monday evenings while enjoying the performance. The concert is included with regular admission for Casa Loma. Mondays - June 19th- August 28th, 7:30 p.m.

Nova Scotia singer/songwriter the irrepressible Kim Doolittle returns to her roots July 22 with an afternoon show at the Annapolis Highland Vineyards in Bear River East NS. Show's from 2-4 and there will lots to hear from tres brilliant Into The Blue album.

Bluesy jazz singer Joanne Powell plays a return engagement at Toronto's 120 Diner Thur. Jul.20, 6-8 PM. The former Lush Life frontgirl will be supported by the stellar lineup of Peter Hill (piano), Brooke Blackburn (guitar) and Ross McIntyre (bass). Powell's last gig at The 120 sold out fast so this one is not to be slept on.