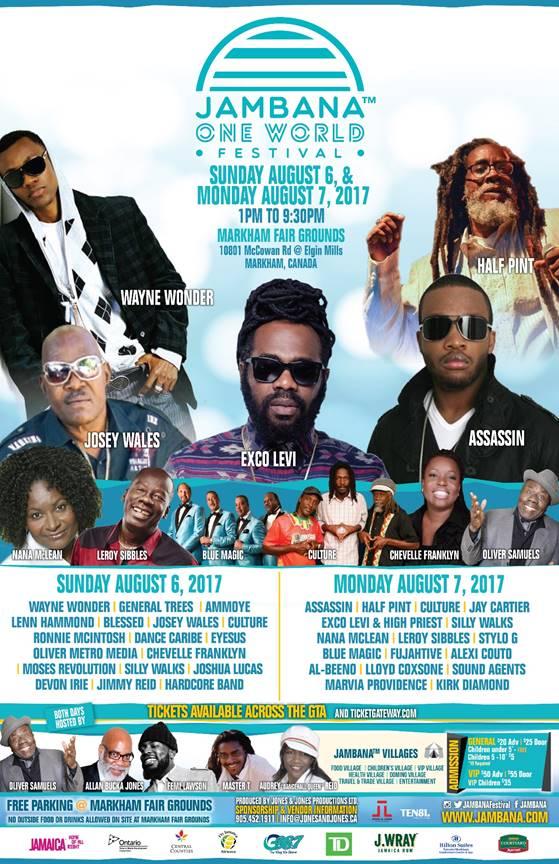 JAMBANATM One World Festival will again be the jewel in the crown in the ever-expanding York Region. Voted as the best music festival by The Festival For Events Of Ontario for the 2nd year in a row, award-winning artists, artisans, and specialty food producers will showcase their creations under spacious JAMBANATM tents. Along with craft shopping, the ambiance is festive: live music, craft demos, kids' activities, and a varied food court, serving a menu to please everyone in the family, of all ages, from grandkids to grandparents.

JAMBANATM One World Festival, has grown out of years of world class concerts, theatrical productions and festivals, produced by Jones & Jones Productions Ltd, founded by Denise Jones & Allan Bucka Jones in 1987. The first was the all-night Reggae On Yah in 1987 at The Great Hall on Queen Street West, downtown Toronto. All night reggae music from 10pm to 6am, featured the best in Canadian Reggae. The Jam ended with Blue Mountain Coffee and Ackee and Salt Fish.

In 2005, Jones & Jones was invited to produce and promote Air Jamaica Day that had begun in 2004. The event took place in a Toronto parking lot, at the corner of Eglinton and Oakwood in 2005 – attendance 1,000, moved to Gage Park in Brampton on August 7, 2006, attendance 10,000 and in 2007, relocated to the Powerade Centre, also in Brampton with an attendance of over 20,000.
Air Jamaica Day was among the biggest events over the Caribana weekend, pulling one of the largest crowds outside of the parade. JAMBANA was born. The first JAMBANA, presented by Air Jamaica and produced by Jones & Jones Productions, was held at Downsview Park on August 3, 2009. Over 45,000 individuals attended.

“JAMBANA is now in its ninth year and we have been blessed with growth and development over the years. We are thankful for the phenomenal support of our Canadian friends and family and an increasing number of friends from across the US and around the world. The Jones & Jones team is delighted to produce this event that is truly fun for the whole family”, says Denise Jones, Executive Producer of JAMBANATM One World Festival and President of Jones & Jones Productions Ltd. “Markham Fair Grounds is our venue and will deliver nothing but good vibes all day long.”

Complete info can be found at http://jambana.com/. Links to advance sale discount tickets can be purchased there.

So, come spend the long weekend. Let’s get together and feel alright. One world. One love.