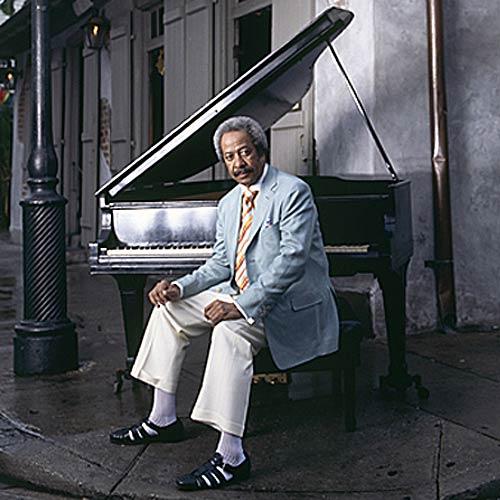 Though always soft-spoken, humble and most often preferring to stay behind the scenes, the list of those who benefited from Toussaint's touch as a producer and arranger is staggering. It ranges from the 1950s to the present day: from Irma Thomas, Aaron Neville, Art Neville, Dr. John, the Meters, Paul McCartney, Joe Cocker and Glen Campbell to the late Ernie K-Doe, Chris Kenner, Lee Dorsey, Jessie Hill, Benny Spellman and Al Hirt, to name but a few.

"His greatest contribution was in not allowing the city's old-school R&B traditions to die out but by keeping pace with developments in the rapidly evolving worlds of soul and funk. In addition, he brought the New Orleans sound to the national stage, and it remains a vital and ongoing part of our musical heritage to this day," proclaimed the Rock and Roll Hall of Fame, which inducted Toussaint as a member in 1998.

Many of Toussaint's songs became familiar not just for their original versions,s but by cover versions as well, including "Ruler of My Heart," "Working in the Coal Mine," "Ride Your Pony," "Fortune Teller," "Southern Nights," "Get Out of My Life, Woman," "Sneaking Sally Through the Alley" and "Mother-in-Law." The diverse list of artists who covered Toussaint songs, all the while holding him in high regard, runs the gamut from The Rolling Stones, The Who, Jerry Garcia, Robert Palmer and Warren Zevon to The Doors, Ringo Starr, The Pointer Sisters and Little Feat.

Touring and performing onstage himself was a relatively new facet of Toussaint's career, mostly a result of his newfound success after Hurricane Katrina, which devastated his New Orleans home and studio. His stepping into the spotlight represented a change for the music legend.

"I prefer writing for artists than writing for myself. I get more inspiration from artists, from other people, than I do myself," he said in a 1998 WWL-TV interview with Hoda Kotb, the year he was honored by the Hall of Fame.

But after relocating to New York following Katrina, while the piano genius collaborated with other musicians (notably Elvis Costello and Eric Clapton), he released CDs of his original work, performed a solo act frequently and even wrote a ballet. He was nominated for a Grammy award and in 2013, was honored with the National Medal of Arts, the highest honor given to an American artist.

"After his hometown was battered by Katrina and Allen was forced to evacuate, he did something even more important for his city -- he went back," said President Obama at the award ceremony. "And since then, Allen has devoted his musical talent to lifting up and building up a city. And today, he's taking the stage all over the world, with all kinds of incredible talent, doing everything he can to revive the legendary soul of the Big Easy."

Born in 1938 and raised in New Orleans' Gert Town neighborhood, Toussaint had early musical encouragement from his father and mother, Clarence Toussaint and Naomi Neville (whose name he later used as a songwriting pseudonym). He first touched a piano at the age of six, he recalled.

"I walked over reluctantly and touched it, from a slight distance, I don't know whether I thought it would bite or not, but I must say I got such a pleasant sound," he told Bill Capo in a 2013 WWL-TV interview. He said he soon began mimicking songs he heard on the radio, before his sister taught him how to read music and then he began performing with neighborhood bands. The front room of the family home on College Court (now memorialized with a plaque) became a practice room and recording studio, both for young Allen and his musical friends and collaborators.

Toussaint caught a couple of breaks as a teenager – joining a local R&B band that also featured guitarist Snooks Eaglin; sitting in for Huey "Piano" Smith with Earl King; and laying down piano parts at a Fats Domino session that the Imperial Records star could not make. As a teenager he performed as a session musician at the legendary Cosimo Matassa's recording studio.

He dropped out of high school in favor of a music career and in 1958, songs by "Tousan," as he called himself, were being recorded by Al Hirt, including 1958's "Java," which became a Grammy-winning hit for the New Orleans trumpeter.

Toussaint came into his own as a studio auteur for the Minit and Instant record labels beginning in 1960. He produced, arranged and wrote a string of classic sides for a host of New Orleans rhythm and blues artists. Many of the songs feature his unmistakable New Orleans piano stylings, in the mold of one of his greatest influences, Professor Longhair.

Toussaint wrote and produced K-Doe's number one hit, "Mother-in-Law" as well as many of his regional favorites including "A Certain Girl," "Tain't it the Truth," and "Te-Ta-Te-Ta-Ta." Also from Toussaint's pen came Chris Kenner's iconic "I Like it Like That," Aaron Neville's "Tell It Like It Is," Art Neville's "All These Things," as well as Spellman's "Fortune Teller" and "Lipstick Traces." Toussaint considered Irma Thomas a muse and wrote two of the songs that became her standards, including "It's Raining" and "Ruler of My Heart."

"Most of the songs that I've written, if it wouldn't have been for that artist, that song wouldn't have been written," he said in the 2013 WWL-TV interview. "It can take anywhere from 15 minutes to never (to write a song)," he said in a 1989 interview with Angela Hill. "A song like 'Mother-in-Law took me about 20 minutes but I must say two or three days before I decided I was going to write a song with that melodic line. But the actual song itself took me 20 minutes."

Toussaint's successful streak was interrupted by a stint in the U.S. Army from 1963 to 1965. When he returned home, he formed Sansu, a production company, with partner Marshall Sehorn. A new string of soul/R&B singles followed, including Dorsey's "Ride Your Pony," "Working in the Coal Mine" and "Holy Cow." Even listed among his 1960s songs is "Whipped Cream," the snappy instrumental that, when recorded by Herb Alpert, became the theme song for TV's "The Dating Game."

New Orleans music legend Allen Toussaint became the eighth musician to get a lifesize bronze statue in a park on Bourbon Street dedicated to the city's musical greats.
Toussaint also groomed a quartet of New Orleans musicians known as the Meters, who served as the Sansu house band while releasing funky instrumentals under their own name and going on to worldwide fame. In 1973, Toussaint and Sehorn built their own Sea-Saint studio, which attracted local musicians like Dr. John and the Neville Brothers, as well as established stars like Paul McCartney, Paul Simon and Robert Palmer. Labelle recorded their 1975 chart-topper "Lady Marmalade" at Sea-Saint with Toussaint.

Another song Toussaint wrote that became familiar to audiences nationwide was "Southern Nights," recorded by Glenn Campbell in 1977 and recognized by BMI as the "most performed song of the year." It was nominated for song of the year by the Grammy Awards and the Country Music Association. Another Toussaint creation, "Get Out of My Life, Woman," remains an R&B favorite, often played by the Paul Butterfield Blues Band, Iron Butterfly, Jerry Garcia and more.

Though he earned rave reviews as a songwriter, arranger and producer, Toussaint was rarely interested in performing, at least not in the early days.

"I was always a little reluctant about the audience thing. When I think about it, I guess whatever 'shy' means, it covers a part of me," Toussaint said in the WWL interview. That changed after Katrina, as he developed his own act, which included not only performing but weaving stories from his New Orleans childhood and musical career.

He was always writing, and said in a 2006 interview that he found inspiration nearly everywhere he looked.

"Everyday life is inspirational, if you're just open to it and enjoy the scenes and the interaction of people as they interact with each other. There are new things being performed every day if you just look around and enjoy what's happening, you'll never run out of inspiration," he said in a WWL-TV interview.

In words, song and in person, Toussaint was always the epitome of cool, most often seen wearing colorful suits and leather sandals, and for many years driving either his Rolls-Royce (which bore the license plate "PIANO") or his Mercedes-Benz (license plate "SONGS").

In recent years, as Toussaint branched out musically, he also launched a record label: NYNO Records, whose artists included the late Raymond Myles, as well as James Andrews, Oliver Morgan and the New Birth Brass Band.

Toussaint performed at the White House four times and though he never won a Grammy, he was nominated six times and presented with a Grammy Trustees Award in 2009. In 2013, he was named an honorary doctor of fine arts by Tulane University, alongside Dr. John and the Dalai Lama. He was also inducted into the Songwriters Hall of Fame, the Blues Hall of Fame and the Louisiana Music Hall of Fame. He performed annually at the New Orleans Jazz and Heritage Festival and was the artist featured on the festival poster in 2009.

Toussaint is survived by his two children, including his son Clarence, known as Reginald, and his daughter, Alison, both of whom managed his career in recent years. He is also survived by several grandchildren.