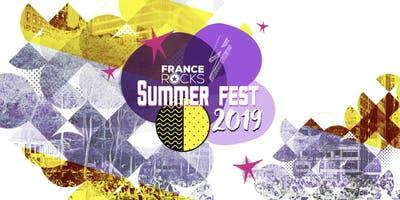 “SummerStage and I are honored to collaborate with France Rocks and Michele Amar again, highlighting the diversity of French talent on our stage. We can always expect the highest caliber of artist from France.” Erika Elliott- Exec Dir, SummerStage.

New York City music lovers will get to experience a wonderful array of French produced music this summer when the festival FRANCEROCKS SUMMER FEST returns. The month-long music festival—the largest of its kind in the US— highlights some of the most edgy and leading talent as well as international artists who draw their inspiration from French Culture. Free and ticketed shows at 20 venues range from Capital One City Parks Foundation SummerStage and Lincoln Center to (Le) Poisson Rouge, Elsewhere, and Baby’s all Right, as well as intimate performance spaces throughout New York City.

Presented by France Rocks and Bureau Export NYC, this year’s festival is supported in part by the city programming initiative ‘NY Music Month’. The line-up includes 26 artists spanning a wide spectrum of styles from electronic, trance, indie pop, rock, eclectic world and jazz. The festival prides itself in mixing together established artists like Les Négresses Vertes, Zdar from Cassius and Lou Doillon with emerging stars like Blick Bassy and Malik Djoudi.

Francerocks annual line-up in partnership with Capital One City Parks Foundation SummerStage will feature one of the most iconic bands in Indie Rock, Les Négresses Vertes and Zdar from CASSIUS will close out the show in an explosive addictive set.

“France Rocks showcases the rich diversity of music made in France. in a place where artistic freedom can engage in meaningful dialogue with the music industry” says FRANCE ROCKS SUMMER FEST founder, and Bureau Export NYC director Michele Amar. "We are thrilled to bring top-notch artists to New York City who we can deliver a rewarding and impactful experience in this thriving scene.”

FRANCE ROCKS is a NY music consulting firm and the definitive platform for discovering music made in France. From industry experts with a knack for promoting the latest French music, culture, artists, videos, tours & more to the US. France Rocks is the official representative of Bureau Export in the US www.francerocks.com

NEW YORK MUSIC MONTH is produced by NYC Mayor’s Office of Media and Entertainment and NY is Music. Every June, New York City celebrates its diverse music ecosystem across all five boroughs. https://www.nymusicmonth.nyc/