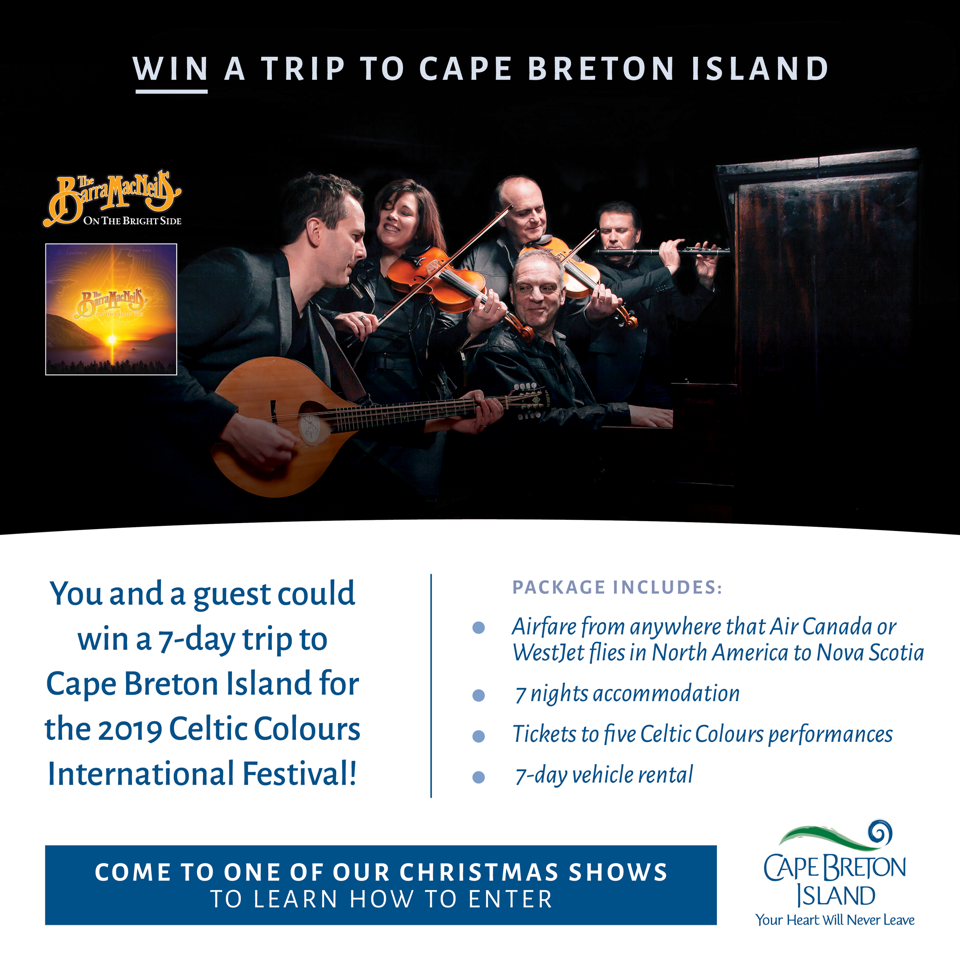 One of the most beloved concerts on the seasonal circuit, the Barra MacNeils East Coast Christmas features a highly entertaining mix of traditional seasonal fare along with entertaining stories and new musical twists; stamped with their lush harmonies and intricate instrumental stylings. Their show has been touring nationally, as well as in the U.S, for years to sold-out houses. Fans can look forward to classic favorites including O Holy Night, Ave Maria, Christmas in Killarney and Auld Lang Syne as well as some comedy, seasonal stories, music, singing, dance and memories that will extend beyond the season and last a lifetime.

The Barra MacNeils are widely regarded as one of the greatest live concert acts in the Celtic world. Their live performance offers a depth of talent that includes multiple lead vocalists, beautiful sibling harmonies, a top-drawer instrumental talent on a wide variety of acoustic, stringed, percussion and wind instruments blended with dancing, storytelling, humor and Gaelic songs. It is family entertainment at the highest level.

Their latest album, On The Bright Side, was released during the Summer of 2018. This is an exquisite collection of everything Barra MacNeils fans love. An upbeat album ranging from familiar fiddle tunes to heart-wrenching Gaelic ballads. The album features distinctive family harmonies, an array of rhythmic instruments weaving through and around various themes – some decidedly classical but then, suddenly, very traditional Cape Breton – the lads singing a cappella and thoughtful solos that merge into all-hands-on-deck medleys. Experience the trademark passion and energy of The Barra MacNeils.

This year anyone attending a Barra MacNeil's Christmas concert will also have an opportunity to win a trip to Cape Breton Island through a partnership with the Island’s tourism organization Destination Cape Breton. Details will be provided at each live performance.

For more information about each show: www.barramacneils.com

About the Barra MacNeils: Multi-award winners and Canada’s Celtic ambassadors, the Barra MacNeils have released over 17 recordings and DVD’s. They continue to perform to sold-out audiences throughout Canada, the United States, the Caribbean, the United Kingdom and Europe. From headlining major festivals, concerts, special guest appearances (Rita MacNeils CTV Christmas Special, performing with The Chieftains) television specials, film and television placement (Men with Brooms Soundtrack; Racket In The Attic) and their annual Christmas tour, they have set the course with a solid foundation for success.

For more information about each show: www.barramacneils.com