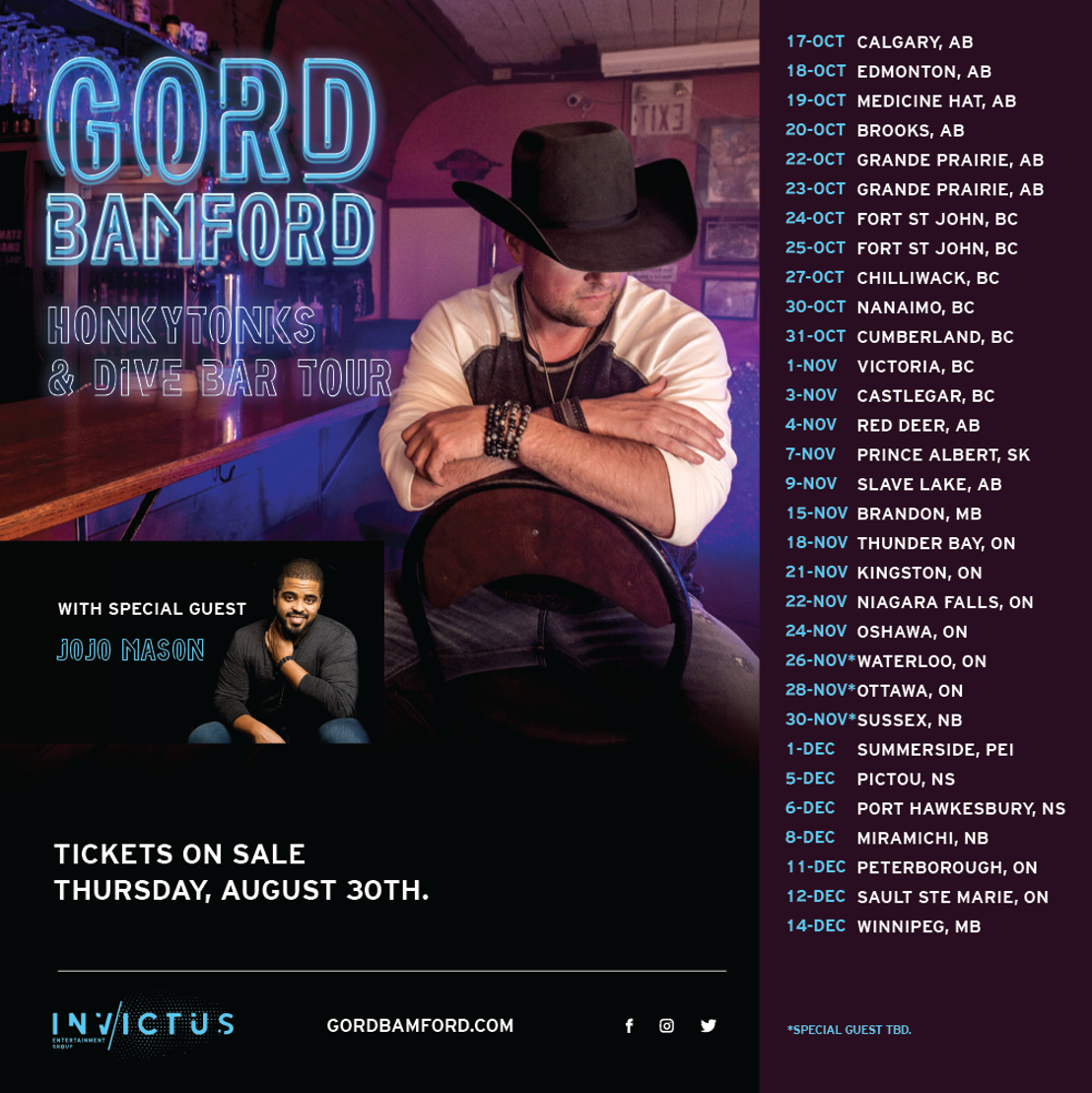 Today, Platinum-selling Sony Music Entertainment Canada recording artist Gord Bamford, announced he is returning to his performing roots to celebrate the release of his latest single "Dive Bar", with the Honkytonks & Dive Bar Tour. Beginning in Calgary, AB on October 17 the tour will hit 29 Canadian cities from coast to coast, giving fans the chance to see one of Canada’s biggest Country music superstars in an intimate setting, at their favourite local bars and honkytonks.

"’Honkytonks and dive bars are where I cut my teeth in this business and fell in love with country music and performing. It’s where I feel right at home,” said Gord Bamford. “I'm looking forward to getting back to my roots where it all began. Make sure to grab your tickets fast cause it's gonna be a party!”

Bamford's current single, “Dive Bar”, from his latest album Neon Smoke, written by Award-winning Canadian singer-songwriter Tebey (Justin Moore, Big and Rich, Emerson Drive) is racing up the radio charts and into the Top 10. The album has also seen the release of the singles “Livin’ On Summertime”, “Ain’t It Grand” – a collaboration with Blue Rodeo’s Jim Cuddy, and the Top 10 Canadian country radio hit “Neon Smoke”.

Bamford is one of the most awarded artists in Canadian country music history.

Gord Bamford has received 24 Canadian Country Music Association (CCMA) Awards including Album of the Year, Single of the Year and Male Artist of the Year wins, multi Canadian JUNO Award nominations, is the two-time winner (2013/2015) of Nashville’s Country Music Association CMA Global Country Artist Award, with 25 Top 10 singles in Canada including the #1 smash hit “When Your Lips Are So Close”. Bamford has spent the better part of 20 years honing his craft and perfecting his sound, with his eighth studio album, Neon Smoke, becoming a fan favourite since its release earlier this year.

Supporting Bamford for 28 dates will be rising star JoJo Mason. With four Top 20 singles under his belt, the SiriusXM "Rising Star" Award nominee has rocketed into the charts and recently released his highly anticipated debut album Both Sides Of The Bar, with his latest single "Something to Wrap My Heart Around" reaching #8 on the Canadian Country charts.