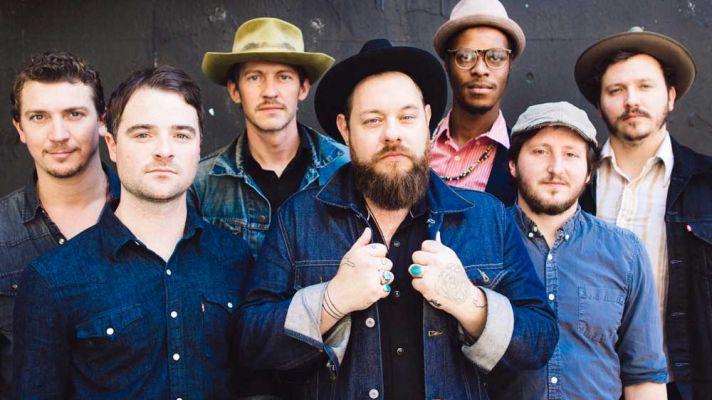 On March 9th, Stax Records will release Tearing at the Seams, the highly anticipated new album from Nathaniel Rateliff & The Night Sweats. Tearing at the Seams follows the band’s critically and commercially lauded, self-titled debut album, which is certified Gold in the U.S., Belgium, Switzerland and the Netherlands, Platinum in Canada, and Silver in the U.K.

You Worry Me, the lead single from the new album, has premiered worldwide today, In addition to the 12-track standard edition, Tearing at the Seams will be available in a 14-track deluxe edition that features two bonus tracks and exclusive photos. Vinyl editions include the (2-disc, 180gram) 12-track standard edition and the (2-disc, 180gram) 14-track deluxe edition, which features an exclusive photo book and special 7” single. Initial writing and recording sessions for Tearing at the Seams took place in Rodeo, New Mexico, where Rateliff & The Night Sweats re-established their dynamic off the stage and in the studio.

“For the first record, I demo’ed everything up and created most of the parts,” said Rateliff. “This time, I felt like we’ve all spent so much time on the road that we should all go off somewhere together. We should all have that experience together.”

The band finished recording with producer Richard Swift — who has helmed records for the Shins and Foxygen in addition to The Night Sweats’ debut — collectively creating a group of songs that capture the band’s emotion and intensity.

Of the new album, Rateliff reflects, “I want — and I need — everybody to feel like they’re a part of this band. I want them to feel like they’re contributing artistically and emotionally to the experience of writing and creating this music. We’ve all had to make sacrifices to be in The Night Sweats and I want them all to know that it’s worth something.”

For the past two years, the Denver-based band has performed extensively across the globe headlining shows and major festivals including Coachella, Bonnaroo, New Orleans Jazz Fest, Newport Folk Festival, Glastonbury, Monterey International Pop Festival and dozens more. The band also made an immediate and lasting impression on late night television including performances on The Tonight Show starring Jimmy Fallon (twice), The Late Show with Stephen Colbert, Jimmy Kimmel LIVE!, CONAN, The Late Late Show with James Corden, as well as PBS’ Austin City Limits and A Prairie Home Companion. Most recently, the band released their first-ever full-length concert recording, Live at Red Rocks, featuring the Preservation Hall Jazz Band. Their hit single, S.O.B., is now certified Platinum in the U.S. and Canada, and Gold in Switzerland.