Skip to main content
Jesse Cook Called on Fans to Collaborate in New Single, “One World, One Voice” 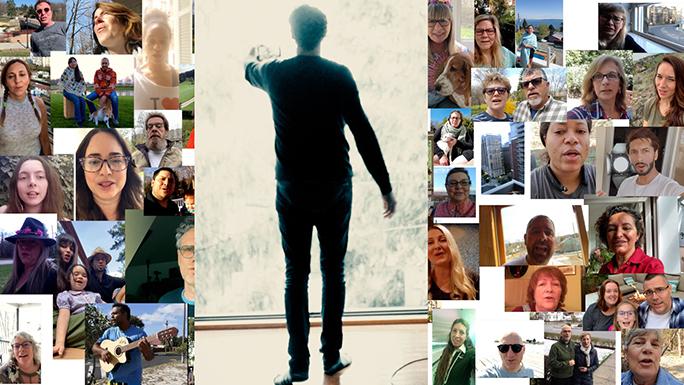 Two weeks ago, Canadian multi-award winning and Internationally acclaimed guitarist, composer and producer Jesse Cook called on his tens of thousands of fans to collaborate on his newest song. The result was an overflowing inbox of contributions from around the globe and a new song, “One World, One Voice”.

“I asked if we could sing a song, together, from all over the world,” Cook shares. “Initially, I wasn’t sure if anyone would take me up on my offer, so I was completely unprepared for the flood of videos that overwhelmed my inbox.”

Watch as Participants from Every Corner of the Map Contribute to the Award-Winning Artist’s Newest Release:
https://youtu.be/8u2sZ-zti7s

If submissions received a marker for each point of origin, every corner of the map would be represented, Cook adds. “I received videos from India, France, the US, Bangladesh, South Africa, Germany, China, Switzerland, Turkey, and more…

“And, of course, lots from Canada!”

The new song is fresh in Cook’s repertoire, written specifically for this project and these times. “I guess we are all stuck in our homes, and the idea of doing something all together struck a chord,” Cook shares. “I’ve spent the last two weeks downloading these videos, putting them together in this song, and every day I get chills hearing those voices.

“I hear the solidarity, the longing, and the hope.

“I’ve never been a part of something like this before, or felt so connected to my fans from all around the globe,” he continues. “I feel honoured they put their trust in me, particularly at this time, as we traverse this difficult period.”

The release of “One World, One Voice” comes a few short weeks after Cook’s latest Facebook feature, a timely revisit to his debut single “Tempest,” originally available 25 years ago this June.

“Three weeks ago, I was supposed to begin the Tempest 25 Tour, one of the biggest tours of my career, and a celebration of that record and the 25 years of music and touring that followed it.

“But, of course, that was postponed. So I sit here at home, like most people in the world, wondering what to do during a pandemic.”

Since the 1995 release of Tempest, Jesse Cook has held ten platinum and gold studio albums with combined sales exceeding two million copies, five concert DVDs and live discs, five PBS specials, a JUNO Award win and 11 nominations, three Canadian Smooth Jazz Awards, a Gemini Award and an Acoustic Guitar Magazine Player’s Choice Silver Award. And that’s not to mention thousands of concerts in dozens of countries, plus millions of views and streams, and countless fans around the world.