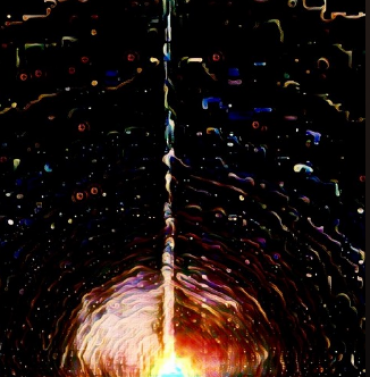 In an almost bluesy fashion, guitarists Joseph Downing and Rocko Bell rev the engine hard in the first opening bars of “Mystified,” the captivating new single from Nashville rock juggernauts Oddnote. The thrust of the chords jerks back and forth a bit, allowing a subtle rest to break through between its violent striking. A lone note shines between the cracks being made under the weight of the riffing, and it lingers and stays around for a second. Maybe to offer hope, maybe to offer us a glimpse of just how far down we’re about to tumble. In a cinematically epic turn of events, we end up getting a little scoop of both as the main guts of the song kick in and we start to hear a little bit of structural clarity. It’s black and white guitar-driven rock, but there’s some hinting that singer Arman Asadsangabi wants to tear down these confining walls around him and get a little more room to breathe as we work our way through the verses. Indeed, the environment illustrated by the opening arrangement of “Mystified,” is, to put it mildly, a constricting, somewhat suffocating terrain to embark on. That doesn’t mean that there isn’t some value to be extracted from this bit; in fact, quite the contrary. Oddnote appears to me to be the kind of band that enjoys and celebrates the chaos and discord of instruments crashing together to create a sense of contrast and aesthetical balance. To me, that not only defines 21st-century postmodernism in western pop music, but it sums up what most of the rock bands that I’ve reviewed this summer have been trying to accomplish, more or less.

If the beat comes off as a little stock to some listeners, they’re probably focusing a little too much on the percussion elements in “Mystified,” which although skillfully performed by skinsman Matthew Millstein are a little too high in the mix during a couple of the song’s biggest moments. Nevertheless, nothing can stop Asadsangabi’s incredible range from grabbing up its share of the spotlight, and the dueling guitars against the steady quaking of the Nick Huff’s bassline and Millstein’s drum shredding would have been enough to make this song a chart-topping hit even without the excellently stylized lyrics that “Mystified” features. It has been a significant amount of time since I was able to write about a group really demonstrating some hardcore physicality in their music that wasn’t attributed to a drum machine or some other synthetic element outside of organic play. Until now. And while I don’t know that Oddnote is looking to change the game by turning the volume knob (way) back up past 10, it sure is nice to see someone doing it anyway.