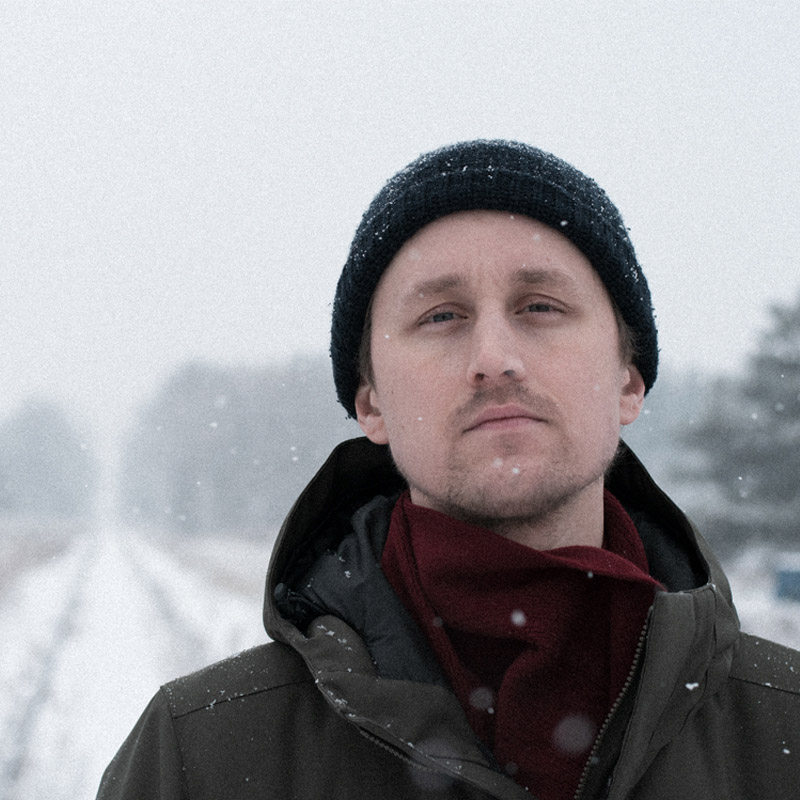 Through an atmospheric and groove-laden lens, Métis alt-rocker Steve Neville parses the perseverance of the human spirit with the release of his new single, “Going Home.”

The song’s cover art faces a freight train head-on; apt, considering the single lands ahead of the artist’s raw and vulnerable forthcoming album, Off Track, detailing his journey surviving cancer.

“Off Track documents the trajectory of my illness, from my time in the ICU to being discharged after receiving my stem cell transplant,” Neville explains — adding that the tracks dive deep into his darkest moments, spinning together stories of spending five months in hospital, let alone during a pandemic and with an infant son at home who he was unable to see.

The fluidity of the album in its unbridled honesty and laid-bare authenticity delivers an unmissable story of the struggle to success, sparing no ebb and flow that comes with recovery.

“Many of the lyrics are about my physical state, and do this often by turning to a central theme on the album,” says Neville. “I compare my body to a broken-down train that has somehow been derailed on the path I thought my life would follow.”

The release is a highly anticipated examination in the test of the human spirit. For Neville — though weak and exhausted — the creativity to document his journey only grew stronger. And while in hospital, he began penning the songs that would eventually cultivate in Off Track, set for release March 25th, 2022. “Ultimately, the album is about moving on in life and accepting that maybe there’s something bright and beautiful beyond the horizon of what initially feels like an accursed departure,” he says.

Neville’s solo project comes years after leaving the now-disbanded Canadian rock outfit, The Balconies. The former group, co-founded by Neville and his sister, Jacquie, had been a mainstay in the country’s indie alternative community for a decade, releasing three albums. Neville would spend five years in hiatus before branching out as a solo musician — and his penchant for songwriting returned during the fight for his life after being diagnosed with Leukemia.

“I had my acoustic guitar with me as my constant companion and confidant,” Neville reflects on his stay in a Hamilton hospital, without the luxury of visitors due to the pandemic. “Now that these songs are out for others to hear, my goal with this music is to act as a friend for anyone in need, whether they’re sick or otherwise struggling in life and with their mental health.”

Neville enlisted producer Liam Jaeger (The Balconies) to flesh out the recording process of the songs he penned while in hospital. The pair took an unconventional approach to assemble the project as a way to capture the spirit of Neville being alone in his fight. “We wanted my voice to honestly reflect what it sounded like when I was singing alone in my hospital room,” Neville reveals, explaining the pair began the process by recording Neville’s voice and guitar before adding layers of instrumentation to the track until it became what we hear on the finished project. “We did this by doing remote sessions, which involved me recording my parts in Hamilton while in and out of the hospital, before sending it over to Liam in Toronto to complete the arrangements and instrument performances.”

“Going Home” is a testament to the emotional rollercoaster he felt in physically leaving the hospital and returning home to his partner and son. “For me, my family is most important,” he shares. “But my illness has also reminded me to appreciate every moment in life by being more present, by connecting with nature, by writing music, or whatever. I’m reminded here of a piece of wisdom from Pema Chödrön in When Things Fall Apart, who teaches that we can accept the most challenging things in life as a gift. ‘Going Home’ is about becoming more aware of what matters and finally following a path that is authentic and fulfilling.”

The track is a low-fi love letter, dripping in Neville’s signature vox and layered with electric guitar and rushing percussion. While the song may be Neville’s deeply intimate ode to success after a life-altering, changing, and redefining chapter, it is what ultimately coaxes each of us to be thankful every day.

And that’s why it hits so hard: Steve Neville may be the one “Going Home” but, on some level, so are each of us.