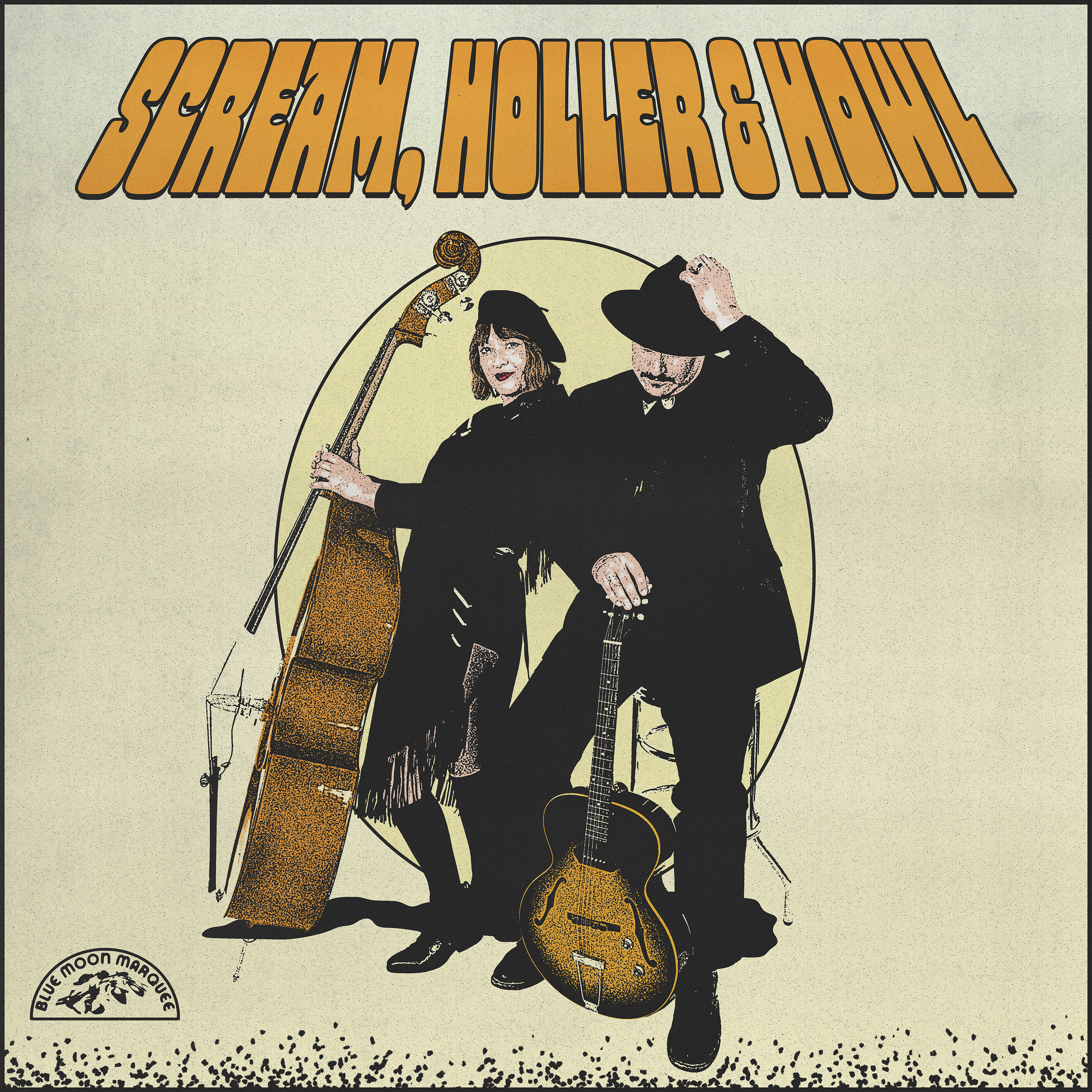 Bursting with a loose, let-it-all-hang-out kind of groove, the song is the opening and title track of their forthcoming album set for release this September 9th via their own label, Blue Moon Marquee Music.

”Music is a release, and we encourage expression of the spirit with this tune,” co-front A.W. Cardinal says. “It’s a song to honour what music provides for so many — an escape.”

“We have written many esoteric, dark songs,” co-front Jasmine Colette adds. “This was a surrender to a fun, goes-down-easy, hard-hitting groove tune about the ultimate: to love, and be loved.”

Recorded live to tape, Scream, Holler & Howl captures their most sophisticated collection of songs yet — all while blazing forward with a full band featuring some of Canada’s finest veteran players. Recorded at Vancouver, BC’s Afterlife Studios, and produced by the band with multi-Blues Music Award-winner Duke Robillard and Erik Nielsen, both the song and its namesake album shine a bright spotlight on the prodigious talents of Cardinal’s vocals and guitar, and Colette’s upright bass and vocals alongside guests Darcy Phillips, Jerry Cook, Matt Pease, Paul Pigat, Bonnie Northgraves, and Señor Erik; Robillard adds his stellar legendary guitar work on several tracks, too.

The album’s ‘Baker’s Dozen’ 13 tracks include 11 original songs plus two distinctive takes on songs written by the legendary Lonnie Johnson: “Another Night to Cry” and “Long Black Train.”

Born of the wild rose country in Alberta, Canada, both Cardinal and Colette played in punk, metal, and rock and roll bands. Leaving home at a young age, they both spent years traveling on their own, working a variety of jobs and touring with different acts. At one point Colette was hitchhiking throughout North America performing vaudeville with her act of hula hooping, skateboarding, and playing trombone simultaneously, while Cardinal was living in New York City working as a bike mechanic and performing at open mics every night.

It was in 2012 that they came together in Vancouver to record Cardinal's original material for his album, Stainless Steel Heart; a mutual old friend was engineering the project and they connected deeply on their taste and obsession over music.

With their distinct energy and style, this acclaimed duo writes and perform original compositions influenced by anything that swings, jumps, or grooves. Carving a path through blues, jazz, jump jive, folk, country, swing, and Indigenous soul with an authentic spirit, their sound does not idle easily in one certain category. Also known as ‘Badlands Jass,’ Colette not only commands the upright bass but also brings the rhythm with her feet on a custom foot drum kit — all while singing in her signature honey-dipped tones — while Cardinal’s distinctive and soulful vocals barrel out like a raging bull and his guitar crackles with the swinging energy of jazz-tinged blues.

Their gift is bringing all these elements together without anything sounding out of step. They collect the roots and smoothly braid them with lyrics that often touch on the underbelly of society, woven with elements of Indigenous storytelling and poetic cadence.

"Blue Moon Marquee have their own completely original style,” American Roots UK writes. “Modern Blues doesn't really get any better than this. This is a tremendous sound by a hugely talented duo.”

To say A.W. and Jasmine are old souls is an understatement, to say the least,” Robillard pens in the album’s liner notes. “They are poised for worldwide recognition in an amazing genre-bending ride through American blues and folk, gypsy jazz, Native American themes, jump blues, swing, and more. These century-old traditions have been redefined and delivered in a new light here. They are astounding in their depth, groove, and soul on this recording. Written, played, and recorded here in a heartfelt and natural old-school way for the world to hear, feel, dance, drink or be alone with.

“For me, working with them in the studio was inspiring and a re-confirmation of my own belief in the power of roots music,” he continues. “Special thanks go out to Afterlife Studios, with their long history of great recordings and real echo chambers, vintage gear, and great engineer Erik Nielsen, who converged magically with all these musicians to make some damn memorable music.”

While they have primarily performed as a duo since 2013, Blue Moon Marquee have recently also performed as a trio or quartet with Darcy Phillips (Jann Arden) on piano and Jerry Cook (Colin James) on tenor and baritone saxophone.

With 2019’s release of Bare Knuckles and Brawn, they were nominated as Blues Artist of the Year at the Western Canadian Music Awards and Indigenous Songwriter of the Year at the Canadian Folk Music Awards. With a “totally unique approach…such a powerful original mix of swing styles with jazz and blues, west coast swing and New Orleans feel” (Sound Guardian) the record topped both the Earshot National Folk/Roots/Blues Charts simultaneously with the National Jazz charts — a rare feat.

Appreciated for their lyrical candor, outstanding musicianship, and vivacious live performances, Blue Moon Marquee was the most-requested band in the country for the Canadian International Jazz Festival Circuit following their 2017 release, Gypsy Blues. That full-length album of original material also garnered the Indigenous Artist of the Year nomination from Western Canadian Music Awards as well as Best New Artist nomination at the Maple Blues Awards.

“As a long-time fan of Blue Moon Marquee, I've had the pleasure of following and appreciating their development over the years,” says Holger Petersen, Founder of Stony Plain Records and longtime radio broadcaster. “The combination of A.W. and Jazz with Duke Robillard takes their music to another inspired level. 'Scream, Holler & Howl' is a wonderful hybrid of their combined swing, blues, and gypsy jazz influences and unique songwriting often inspired from A.W.'s Metis Cree heritage. It's a joy to hear and to see their on-stage chemistry and natural showmanship. I encourage everyone to get to know them by checking out their website, videos, and original artwork.”

“Their presentation is spellbinding and their original songs are unforgettable,” legendary award-winning American blues pianist David Vest vouches. “To me, they represent the real core of the folk-blues tradition. They would not seem out of place if they were on stage beside Lonnie Johnson or the young Memphis Minnie.”

“They embrace the retro vein celebrated for decades between ragtime blues, shady mambo, and vintage swing,” Paris Blues Magazine writes from France. “With a smoldering live performance and outrageous vocals… Welcome to the baroque cabaret, where the Charleston disjoins itself!”