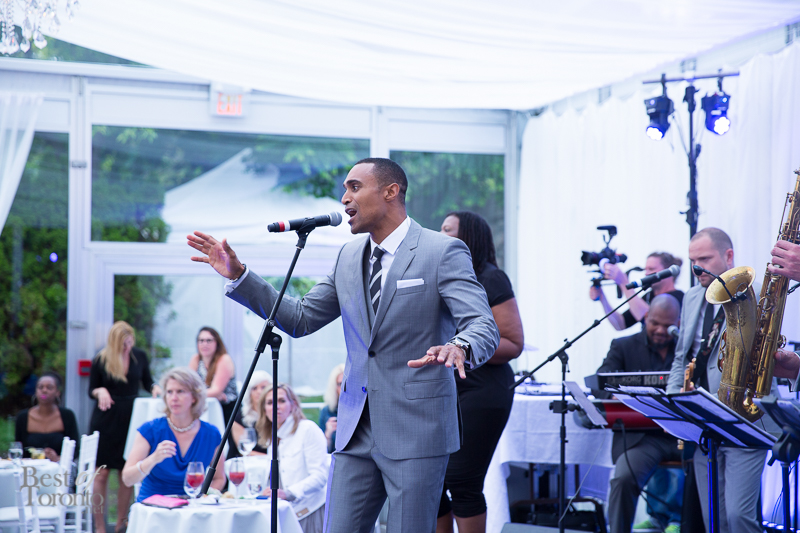 On a gorgeous August eve, in the resplendent gardens of a Gothic Revival castle, Toronto's Crown Prince of soul Sean Jones came out to play. Used to seeing Jones testifying to the downtown soul set in enticingly lit clubs like Candyland, so odds were high the set list would be verry diff for the castle crowd. While Jones solo material can upon occasion go dark, the pre show vibe was tres partee and drinkee, hotly anticipating the sound track they came for. They would not be disappointed.

Jones arrived fronting a sextet of genre heavies with backing singer Miku and glided into the vibe enhancing original "This is Love." Great response, as was generated by all of the singles, mostly notably the current “Smoke”. Having ratcheted up the tension sufficiently, Jones got the party smoothly started with Bobby Hebb's 1966 hit "Sunny." The take was a template of what was to follow, an emotional meld of sinewy tenor and sweet falsetto. This from Jones about that: "We've coined the sound "soul over rock" because my delivery still has a strong Soul influence yet ... the tracks really move ... the feel is not urban but rather a fusion of soul and R&B vocals."

Take that to Burton Cummings' 'These Eyes "and The Band's 'The Weight' and the result was a freshness and new perspective, Jones going all Gospel repeating the chant "put your weight on me" and igniting a sing-along that blended nicely into a crowd pleasing soul rockin' run at "Heart Of Gold." Taking the people with him, Jones time travelled through such as the little heard Frank Wilson gem, "Do I Love You(Indeed I Do)", a theatrical and sensuous "Rainy Night In Georgia" with only pianist Michael Shand, a rollicking "Shake A tail Feather."

That was just the first set. The band came back to everybody out of their seats in the tent and jostling for dancing room. The vibe was more heated and urgent so the band obliged with the one-two-three of "Dancing In The Street," " Uptight Outa Sight" and The Four Tops "I Can't Help Myself (Sugarpie Honeybunch.)"

Man took that mic and strolled to the centre of the steaming, heaving crowd for a "Stand By Me" sing-along, which pretty much became the thing from there on, morphing into a mellow flow on "Grooving", joined by the horn section in the thick of the throng and whole tent lost its collective mind as Jones falsettoed his way through "My Girl" and never dropped a wail, taking it down a notch or two for the exultant tenor of "You Make Me Feel Brand New", getting all cheeky back to backing "You Sexy Thing" with "Let's Dance."

So that's what went down and left us uplifted and bigass smiling at the sheer beauty and feelgoodness of the music, dishevelled and weak kneed from the dancing, misty in the fleeting magic of the moment.

As a sidebar, Jones offered four guest artists this night; Melanie Durrant, George Nozuka, Alana Bee and Kellylee Evans. Except for Durrant, safe bet that few in the house knew who these r'n'b comers were. The lineup was a snapshot of the current r'n'b scene in the T.Dot, Durrant coming from a classic place, Bee more theatrical and pop inflected, Kellylee Evans showing a hip hop dancehall sensibility, Nozuka working a bluesy baritone.. Given the warm reception accorded each of the guests and the packed scene, seemed like there might be a market for a genre showcase along the lines of OVO Fest. Left musing on the possibility we'd just witnessed a franchise aborning. It'd be a very good thing for Music City Toronto.