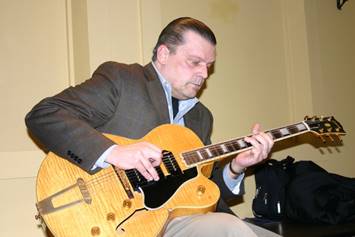 When guitarist Jay Geils passed away at age 71, he left behind a legacy of wonderful music, not only for the blues-rock sounds he created within his namesake J. Geils Band, but also on several albums he recorded for Stony Plain Records that explored the music of his formative years – jazz and swing – instilled in him by his father.

“Stony Plain was honored to release several swing jazz recordings by Jay Geils including two projects by New Guitar Summit (Jay Geils, Duke Robillard and Gerry Beaudoin),” said Stony Plain Records founder Holger Petersen. “It was a joy to be in the studio with them and to witness Jay's ability to arrange big band songs for three great swing guitar players. Jazz and blues were his first love and he had a deep understanding of their roots. I admired him for turning his back on rock stardom to play the music he loved.”

“I am truly saddened by the loss of Jay Geils,” said Duke Robillard. “He was a wonderful human being; intelligent, talented, charming and a good friend. His in-depth knowledge of blues, jazz, guitars and Italian cars was remarkable and he was always enthusiastic and fun to be around. Jay was a down to earth guy in spite of his rock legend status. He will be missed by his legions of friends and fans.”

The New Guitar Summit albums included the trio’s self-titled first CD, as well as a DVD video release, Live from Stoneham Theatre, both out on the Stony Plain label in 2004. In the New Guitar Summit CD liner notes, writer Ted Drozdowski called it “A swinging hybrid of jazz and blues music using delightful three-part harmony playing that's the signature of this epic guitar trio.”

The three New England-based guitarists first began performing together in 1997, with one of their highlights coming that year when they joined the Woody Herman Orchestra as special guests in front of 5,000 fans at City Hall Plaza in Boston.

In 2008, New Guitar Summit released Shivers, a studio album which was produced by Jay Geils. Joining as special guest on Shivers was legendary Canadian rocker Randy Bachman (Guess Who, Bachman Turner Overdrive), who added his sparkling guitar work and laid-back vocals on two Mose Allison classic songs, “Your Mind Is On Vacation” and “Everybody’s Crying Mercy.” In addition to the Mose Allison tunes, the band covered such classics as “Flying Home,” “Honey Suckle Rose,” “Broadway” and the title track, written by Charlie Christian and Lionel Hampton. The band also added a jumping arrangement on the early rock ‘n’ roll/R&B chestnut, “Little Bitty Pretty One,” plus four original songs.