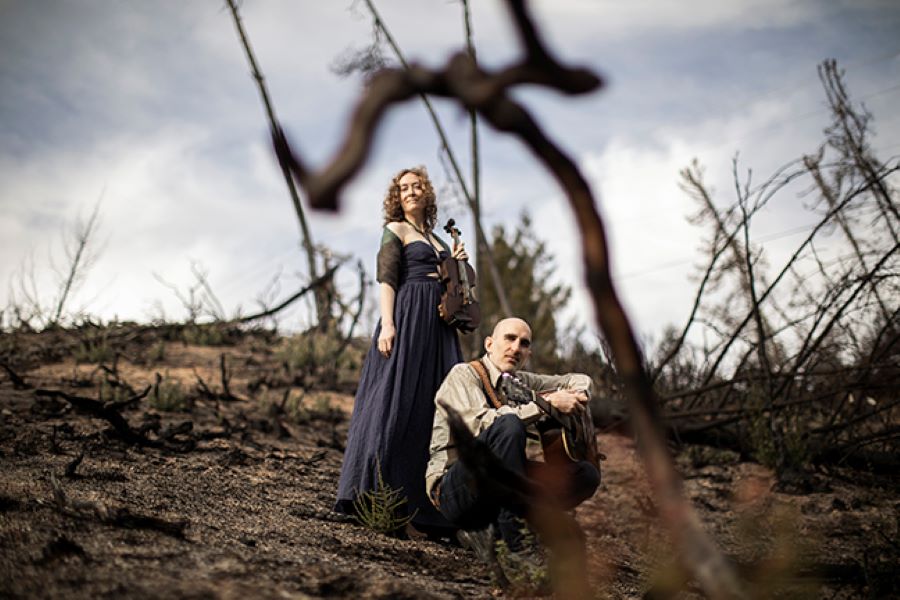 Under the soaring redwood forest canopies of Bonny Doon, California, folk-roots artists Dan Frechette and Laurel Thomsen tell the tale of dark money interests within the hopeful and positive community call-to-action that is their new single, “Money Shouldn’t Talk That Strong” – check it out on YouTube here:

Complete with an accompanying video, the new song accompanies a list of harmonic pleasures on the duo’s recent studio album, After The Fire. Drawing on their collective experience traveling the American landscape and witnessing the devastating effects of poverty and addiction, the verses about nonspecific problems set the stage for the shift, “in the vibe of the song, of course — but hopefully also in policy, focus, and more,” they share.

While heading back to California from a Canadian prairies tour in 2019, the impending US presidential election, combined with hostile economic conditions, made the issue hard to turn away; “from politics to the housing and homelessness crises, to climate and catastrophes, the common thread seemingly being that money often gets the last word.”

Accompanying Dan Frechette's moody guitar playing are Laurel Thomsen’s inspirational lyrics — which are derived from the hope of those negatively affected by public policy in a non-partisan way. With ease, the song emphasizes “universal sentiments, dreams, and goals rather than putting weight into past grievances or the stance of any particular race, religion, or side of the political spectrum.”

“Overall, the song is intended to leave people feeling uplifted and inspired and — with Dan’s rocking backing band and my violin, viola, and cello trio — reinvigorated to do what they can to help create a fairer world,” Thomsen adds.

“Just bubbles in a bathtub
But poison was seeping to the bone, alone
In times the sages warned
No sign of a savior, we mourn, no
When selling off our decency ain’t a crime
Sends empathy cowering to the corners of our minds”

After meeting in 2012 and forming a once-in-a-lifetime connection Pinawa, Manitoba’s Dan Frechette and Monterey, California’s Laurel Thomsen have been dazzling audiences across North America. Frechette and Thomsen’s lush sonic palette has also taken them across international borders to several European countries, further proving the duo's resilience and dedication to their harmonic craft. Between Frechette’s experience as an established songwriter and Thomsen’s classically informed compositional work as an accomplished violinist, this duo has only scratched the surface of their collaborative potential.

The potent title of the album comes from the forest fires that continue to sweep the California region; the duo was directly impacted after a freak lightning storm located near Frechette's home studio led to several hundred houses being consumed by a ferocious blaze. Thankfully, all the band equipment and music were rescued before the studio fell to ash.

“After our evacuation to the safe haven of a friend’s home, After the Fire marks the end of an era, and a fresh start,” they share.